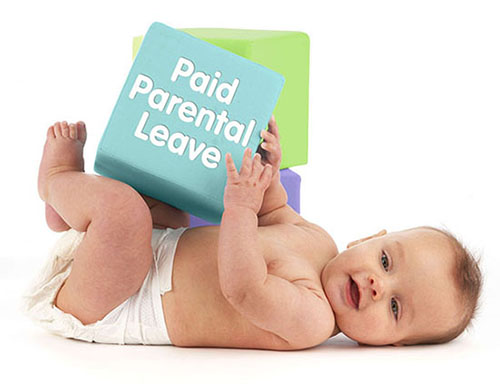 Paid parental leave in the United States is among the worst in the world. As an industrialized nation - we lag behind. I've seen mom's who only get 6 weeks - dads who get none - and at the very most 3 months for either. I've seen moms extend their maternity leave by claiming back problems which gives them another three months if they can present medical proof. I know Americans like to claim injury - go out on disability for periods of time - and in general are burnt out.

I was luck to have been a stay-at-home mom for 17 years as my daughters were growing up - something I embraced and would not have changed as most educated moms of my generation worked. I could not have imagined teaching then coming home and successfully meeting the needs of my family - but that is another blog about working moms and how they cope.

Having a baby, managing your time, and finding affordable positive childcare is not always easy. The longer most moms are home, the more they wants to stay with her children and not work. This is another situation with no perfect solutions in the issues we face while here.

A year at home can help a woman create a better way to live her life, deal with her issues, increase her education possibly online, decided on future career, and gain strength physically and emotionally. It can be that "drop out moment" many people take to reinvent themselves - with or without having a baby.

Parental leave is different in many parts of the world - take for example western Europe. Female clients there have told me they get as much as 1 year off - dads as well. What a joy that would be for an American mom who may or may not want to live with the father of the baby who in reality is nothing more than a sperm donor. So many scenarios ... so many blogs...

Virgin Group Says Its Year-Long Maternity, Paternity Leave Policy Will Come to U.S.   ABC - June 11, 2015
Virgin Group's new generous family leave policy introduced by founder Sir Richard Branson today, including 12 months of paid leave for new dads, may come to its other management office in the U.S. after all. While this new policy applies to Virgin's 140 employees in its management offices in London and Geneva, Switzerland, a spokeswoman tells ABC News that the company hopes to expand the policy across the Atlantic soon. The British company has about 50,000 employees, including for its Virgin Galactic spaceflight company. The Virgin Group is a minority shareholder of the publicly-traded Virgin America airline, which is headquartered in San Francisco.

Parental leave or family leave is an employee benefit available in almost all countries that provides paid time off work to care for a child or make arrangements for the child's welfare. The terms "parental leave" and "family leave" include maternity, paternity, and adoption leave. Often, the minimum benefits are stipulated by law.

Paid parental leave has been available as a legal right and/or governmental program for many years, in one form or another. In 2014, the International Labor Organization reviewed parental leave policies in 185 countries and territories, and found that all countries except two (the United States of America and Papua New Guinea) have laws mandating leave; laws vary in whether leave is paid by the employer or through social security. Read more