Speaking of Texas ... I grew up with an amazing father who loved country music which we listened to on vinyl and the radio. We watched westerns in black and white with Texas portrayed as a gun-toting state - both for protection and criminal activities (always duality) though my family never owned a gun.

So here we are in the age of growing insanity and violence where some law makers want to up the restrictions on guns to reduce violence vs. those who think most people should have guns. I understand why people want to have guns for protection as human programming heads into chaos in end times and the reality show we call life comes full circle. I am a senior who lives alone and feels safe in my area but if I needed a gun I would have no problem learning to shoot and buying one. I understand all the things that can go wrong owning a gun but I also understand that we live in end times which means it's going to get crazier as created by human and planetary programming. In duality both positive and negative results will happen

Texas Lawmakers Move to Drop Most Handgun Licensing Requirements   NY Times - May 25, 2021
The bill would allow most adults over 21 to carry a handgun. Gov. Greg Abbott, who said he would sign it, called it the strongest Second Amendment legislation in Texas history. Gun rights advocates say the adoption of so far-reaching a law in Texas, long considered a bellwether of gun rights legislation, could encourage similar conservative legislation in other states. Critics, including some senior law enforcement officers, call the new legislation a dangerous retreat from gun control amid a recent surge in gun violence, particularly in a state with a long and painfully recent history of mass shootings. 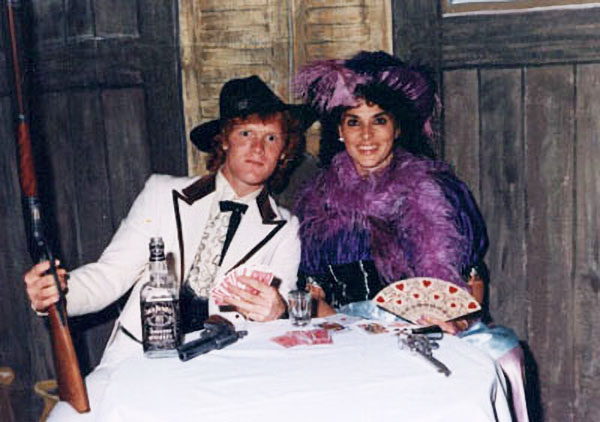 Not all of my ex's live in Texas - actually none of them do. Here I am with ex-boyfriend, John, reenacting a scene from the old west. I have some interesting memories from my timeline in the old west - verified by others I met in this lifetime who share the same details - names, places, events. I ran a brothel in the old west but that's a story for another day especially when some of those men showed up in this lifetime.