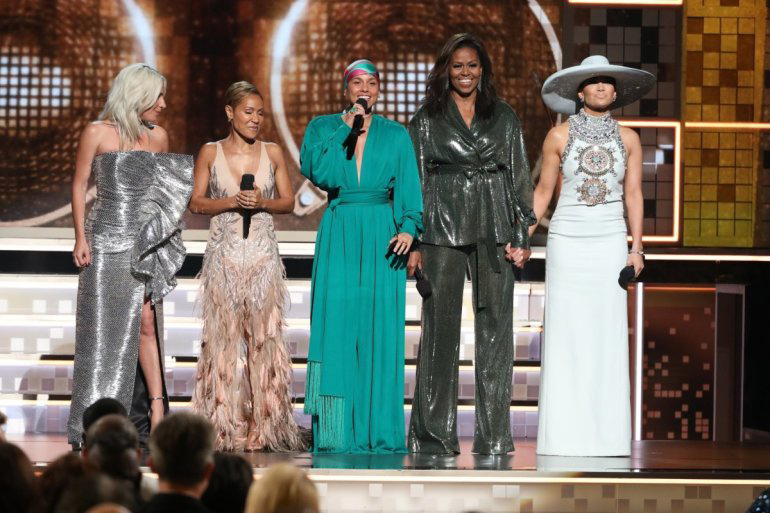 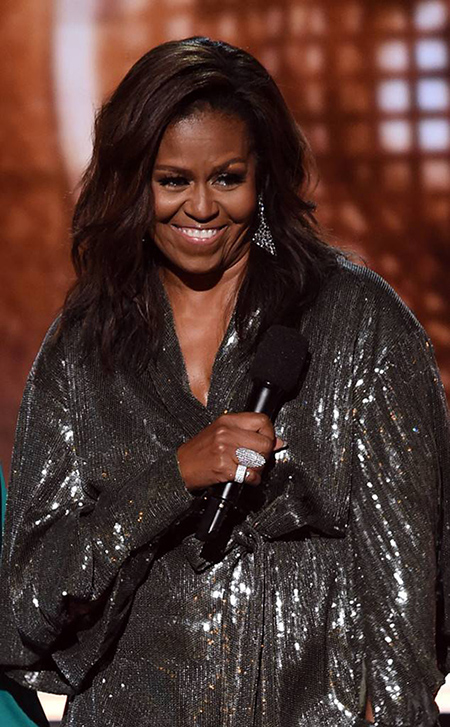 The 2019 Grammy Awards featured great entertainment as always with a surprise appearance by Michelle Obama which touched those in the audience and at home in this time of political chaos. Alicia Keys kicked off the show then announced she had brought some friends along. The curtain opened to reveal four women who descended a staircase ... Lady Gaga, Jada Pinkett Smith, Jennifer Lopez and OMG former first lady Michelle Obama looking radiant. I was hoping for Oprah and Beyonce but not this time around.

While the girl-power gathering sent fans into a frenzy, none of the A-list performers on stage got nearly the reaction that Michelle enjoyed. Oh how I miss having a first lady who is out there doing great things and supporting her husband.

All four women explained the impact of music on their lives, with Michelle speaking last. As she shared her first words, the audience erupted into wild cheering that lasted so long, Michelle herself had to try to calm the crowd down in typical Michelle-fashion. "From the Motown records I wore out on the South Side to the 'who run the world' songs that fueled me through this last decade, music has always helped me tell my story," Obama shared, smiling. "Music helps us share ourselves. Our dignity and sorrows, our hopes and joys. It allows us to hear each other and to invite each other in. Music shows us that all of it matters." Without a doubt, the beloved former first lady's cameo appearance will go down as one of the night's biggest surprises, and viewers couldn't contain their excitement, making the 55-year-old revered political figure a trending topic on Twitter within minutes.

Two iconic female singers in my age age group performed. First up was country music legend Dolly Parton who turned 73 in January. Dolly has received 47 Grammy nominations and won nine awards. She highlighted the 2019 Grammys with a star-studded performance alongside Miley Cyrus, Katy Perry, Kacey Musgraves, Little Big Town and Maren Morris as part of a tribute to the queen of country. Then there was Diana Ross who was celebrating her 75th birthday by performing a medley of her Motown hits as she interacted with the audience. Diana is a 12-time Grammy nominee, never earning a competitive honor, but in 2012 becoming the recipient of the Grammy Lifetime Achievement Award. Both women look amazing for their age and have kept their youthful figure which is part of looking and feeling good.