We live in a time of great Earth changes and upheaval which I call End Times in the simulation of reality. Climate change and natural disasters are accelerating exponentially including flooding reminding us of biblical flood stories in which planet Earth was overrun by great floods only to begin again as the waters receded. There is no going back. About flooding


Ancient 'Megafloods' Tilted The Very Direction of Earth's Crust, Scientists Find   Science Alert - February 19, 2022
Earth's last major ice age locked up gargantuan amounts of water in vast glaciers. Once they melted, it was a spectacle to behold as tremendous floods gouged channels into the face of the planet.


Turkey floods: Death toll near Black Sea rises to at least 70   BBC - August 16, 2021
A huge search-and-rescue operation is under way in northern Turkey after flash floods along the Black Sea coast killed at least 70 people.


Africa's most populous city is battling floods and rising seas. It may soon be unlivable, experts warn   CNN - August 1, 2021 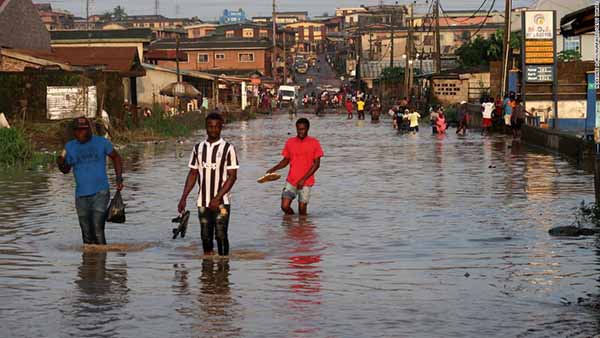 Cars and houses submerged in water, commuters wading through buses knee-high in floods, and homeowners counting the cost of destroyed properties. Welcome to Lagos during rainy season. Residents of Nigeria, Africašs most populous nation, are used to the yearly floods that engulf the coastal city during the months of March to November. In mid-July, however, the major business district of Lagos Island experienced one of its worst floods in recent years.


A Global Flood Is Coming, And This Is What Scientists Expect It to Look Like   Science Alert - July 31, 2020
The perilous rise of our seas is pushing tides, waves and storms further inland from our shores - so much so, that in the coming century, scientists predict enormous swathes of land will be regularly inundated by water. By 2100, if we have failed to put up defenses and do nothing to curb our global emissions, new research has found coastal flooding could increase by nearly 50 percent.


Flood data from 500 years: Rivers and climate change in Europe   PhysOrg - July 22, 2020
Overflowing rivers can cause enormous problems. Worldwide, the annual damage caused by river floods is estimated at over $100 billion - and it continues to rise. To date, it has been unclear whether Europe is currently in a flood-rich period from a long-term perspective.


'100-year' floods will happen every 1 to 30 years, according to new flood maps   PhysOrg - August 25, 2019
A 100-year flood is supposed to be just that: a flood that occurs once every 100 years, or a flood that has a one-percent chance of happening every year. But Princeton researchers have developed new maps that predict coastal flooding for every county on the Eastern and Gulf Coasts and find 100-year floods could become annual occurrences in New England; and happen every one to 30 years along the southeast Atlantic and Gulf of Mexico shorelines.


Megafloods: What They Leave Behind   Science Daily - January 17, 2014
South-central Idaho and the surface of Mars have an interesting geological feature in common: amphitheater-headed canyons. These U-shaped canyons with tall vertical headwalls are found near the Snake River in Idaho as well as on the surface of Mars, according to photographs taken by satellites. Various explanations for how these canyons formed have been offered -- some for Mars, some for Idaho, some for both.


Global Sea Level Rise Dampened by Australia Floods   Science Daily - August 19, 2013
When enough raindrops fall over land instead of the ocean, they begin to add up. New research led by the National Center for Atmospheric Research (NCAR) shows that when three atmospheric patterns came together over the Indian and Pacific oceans, they drove so much precipitation over Australia in 2010 and 2011 that the world's ocean levels dropped measurably. Unlike other continents, the soils and topography of Australia prevent almost all of its precipitation from running off into the ocean. The 2010-11 event temporarily halted a long-term trend of rising sea levels caused by higher temperatures and melting ice sheets. Now that the atmospheric patterns have snapped back and more rain is falling over tropical oceans, the seas are rising again. In fact, with Australia in a major drought, they are rising faster than before.


The 20 Cities Most Vulnerable to Flooding   Live Science - August 19, 2013
Researchers have just figured out which cities across the globe face the highest risk from coastal flooding. To do so, they compiled data on 136 coastal cities with more than 1 million residents, looking at the elevation of the cities, the population distribution and the types of flood protection they had, such as levees or storm-surge barriers. They then combined that data with forecasts of sea level rise, ground sinking due to groundwater depletion, as well as population growth projections and economic forecasts of gross domestic product (GDP). From there, they used the depth of water flooding a city to estimate the cost of the damage.