Crystalinks has two files referencing ancient art. The first deals with petroglyphs and rock art depicting aliens and other interesting characters. The second file has to do with ancient cave paintings with similar themes. 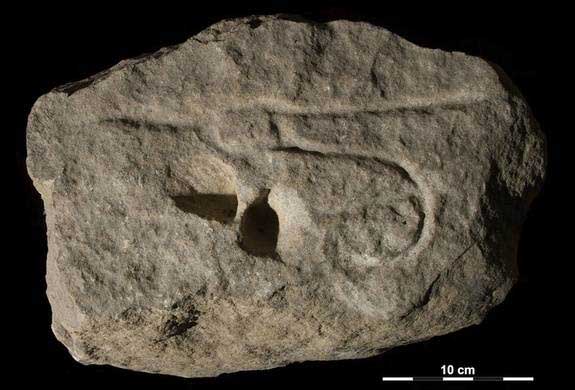 Female Genitalia Carvings Are Europe's Oldest Rock Art   Live Science - May 14, 2012
The oldest rock art ever found in Europe reveals an interest in the female form - and the type of decor that the first Europeans preferred for their living spaces. The new discovery, uncovered at a site called Abri Castanet in France, consists mainly of circular carvings most likely meant to represent the vulva. The carvings were etched into the ceiling of a now-collapsed rock shelter about 37,000 years ago. The artists who created this ceiling decor were the first humans in Europe, a group called the Aurignicians. Arriving from Africa, they would replace the Neanderthals in Eurasia.


Anthropologists Discover Earliest Form of Wall Art   Science Daily - May 14, 2012
Anthropologists working in southern France have determined that a 1.5 metric ton block of engraved limestone constitutes the earliest evidence of wall art. Their research, reported in the most recent edition of the Proceedings of the National Academy of Sciences, shows the piece to be approximately 37,000 years old and offers rich evidence of the role art played in the daily lives of Early Aurignacian humans. The research team, composed of more than a dozen scientists from American and European universities and research institutions, has been excavating at the site of the discovery -- Abri Castanet -- for the past 15 years. Abri Castanet and its sister site Abri Blanchard have long been recognized as being among the oldest sites in Eurasia bearing artifacts of human symbolism. Hundreds of personal ornaments have been discovered, including pierced animal teeth, pierced shells, ivory and soapstone beads, engravings, and paintings on limestone slabs.