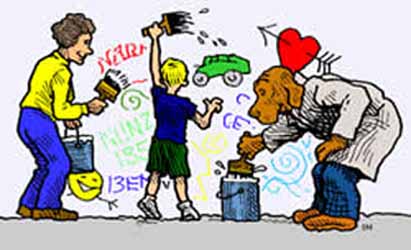 Graffiti are writing or drawings that have been scribbled, scratched, or painted illicitly on a wall or other surface, often in a public place. Graffiti range from simple written words to elaborate wall paintings, and they have existed since ancient times, with examples dating back to Ancient Egypt, Ancient Greece, and the Roman Empire.

The ancient Romans carved graffiti on walls and monuments, examples of which also survive in Egypt. Graffiti in the classical world had different connotations than they carry in today's society concerning content. Ancient graffiti displayed phrases of love declarations, political rhetoric, and simple words of thought, compared to today's popular messages of social and political ideals The eruption of Vesuvius preserved graffiti in Pompeii, which includes Latin curses, magic spells, declarations of love, alphabets, political slogans, and famous literary quotes, providing insight into ancient Roman street life. One inscription gives the address of a woman named Novellia Primigenia of Nuceria, a prostitute, apparently of great beauty, whose services were much in demand. Another shows a phallus accompanied by the text, mansueta tene ("handle with care").

The first known example of "modern style" graffiti survives in the ancient Greek city of Ephesus (in modern-day Turkey). Local guides say it is an advertisement for prostitution. Located near a mosaic and stone walkway, the graffiti shows a handprint that vaguely resembles a heart, along with a footprint and a number. This is believed to indicate that a brothel was nearby, with the handprint symbolizing payment. Lord Byron's survives on one of the columns of the Temple of Poseidon at Cape Sounion in Attica, Greece.

French soldiers carved their names on monuments during the Napoleonic campaign of Egypt in the 1790s.

The only known source of the Safaitic language, a form of proto-Arabic, is from graffiti: inscriptions scratched on to the surface of rocks and boulders in the predominantly basalt desert of southern Syria, eastern Jordan and northern Saudi Arabia. Safaitic dates from the first century BC to the fourth century AD.

Graffiti, known as Tacherons, were frequently scratched on Romanesque Scandinavian church walls. When Renaissance artists such as Pinturicchio, Raphael, Michelangelo, Ghirlandaio, or Filippino Lippi descended into the ruins of Nero's Domus Aurea, they carved or painted their names and returned to initiate the grottesche style of decoration.

Viking graffiti survive in Rome and at Newgrange Mound in Ireland, and a Varangian scratched his name (Halvdan) in runes on a banister in the Hagia Sophia at Constantinople. These early forms of graffiti have contributed to the understanding of lifestyles and languages of past cultures.

It was not only the Greeks and Romans who produced graffiti: the Maya site of Tikal in Guatemala contains examples of ancient Maya graffiti.

There are examples of graffiti occurring in American history, such as Signature Rock, a national landmark along the Oregon Trail.

Ancient tourists visiting the 5th century citadel at Sigiriya in Sri Lanka scribbled over 1800 individual graffiti there between 6th and 18th centuries. Etched on the surface of the Mirror Wall, they contain pieces of prose, poetry, and commentary. The majority of these visitors appear to have been from the elite of society: royalty, officials, professions, and clergy. There were also soldiers, archers, and even some metalworkers. The topics range from love to satire, curses, wit, and lament. Many demonstrate a very high level of literacy and a deep appreciation of art and poetry. Most of the graffiti refer to the frescoes of semi-nude females found there.


In modern times, paint (particularly spray paint) and marker pens have become the most commonly used graffiti materials. In most countries, marking or painting property without the property owner's consent is considered defacement and vandalism, which is a punishable crime.

Graffiti may express underlying social and political messages and a whole genre of artistic expression is based upon spray paint graffiti styles. Within hip hop culture, graffiti have evolved alongside hip hop music, b-boying, and other elements. Unrelated to hip-hop graffiti, gangs use their own form of graffiti to mark territory or to serve as an indicator of gang-related activities.

Controversies that surround graffiti continue to create disagreement amongst city officials, law enforcement, and writers who wish to display and appreciate work in public locations. There are many different types and styles of graffiti; it is a rapidly developing art form whose value is highly contested and reviled by many authorities while also subject to protection, sometimes within the same jurisdiction.


Graffiti writing is often seen as having become intertwined with hip hop culture and the myriad international styles derived from New York City Subway graffiti. However, there are many other instances of notable graffiti in the twentieth century. Graffiti have long appeared on building walls, in latrines, railroad boxcars, subways, and bridges. The example with the longest known history, dating back to the 1920s and continuing into the present day, is Texino.

Rock and roll graffiti is a significant subgenre. A famous graffito of the twentieth century was the inscription in the London tube reading "Clapton is God" in a link to the guitarist Eric Clapton. The phrase was spray-painted by an admirer on a wall in an Islington station on the Underground in the autumn of 1967. The graffito was captured in a photograph, in which a dog is urinating on the wall.

Graffiti also became associated with the anti-establishment punk rock movement beginning in the 1970s. Bands such as Black Flag and Crass (and their followers) widely stenciled their names and logos, while many punk night clubs, squats, and hangouts are famous for their graffiti. In the late 1980s the upside down Martini glass that was the tag for punk band Missing Foundation was the most ubiquitous graffito in lower Manhattan, and was copied by hard core punk fans throughout the US and West Germany.

Along similar lines was the legend "Frodo Lives", referring to the protagonist of The Lord of the Rings. 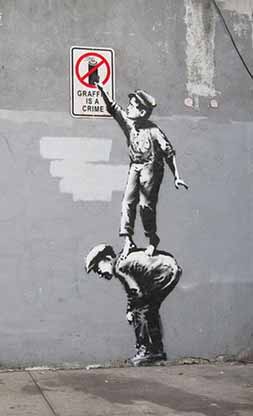 Personal expression takes us to Banksy is one of the world's most notorious and popular street artists who continues to remain faceless in today's society. He is known for his political, anti-war stencil art mainly in Bristol, England, but his work may be seen anywhere from Los Angeles to Palestine. In the UK, Banksy is the most recognizable icon for this cultural artistic movement and keeps his identity a secret to avoid arrest.

Much of Banksy's artwork may be seen around the streets of London and surrounding suburbs, although he has painted pictures throughout the world, including the Middle East, where he has painted on Israel's controversial West Bank barrier with satirical images of life on the other side. One depicted a hole in the wall with an idyllic beach, while another shows a mountain landscape on the other side. A number of exhibitions also have taken place since 2000, and recent works of art have fetched vast sums of money. Banksy's art is a prime example of the classic controversy: vandalism vs. art. Art supporters endorse his work distributed in urban areas as pieces of art and some councils, such as Bristol and Islington, have officially protected them, while officials of other areas have deemed his work to be vandalism and have removed it.

Banksy's work grew out of the Bristol underground scene, which involved collaborations between artists and musicians. Observers have noted that his style is similar to Blek le Rat, who began to work with stencils in 1981 in Paris. Banksy says that he was inspired by "3D", a graffiti artist who later became a founding member of Massive Attack, an English musical group.

Banksy displays his art on publicly visible surfaces such as walls and self-built physical prop pieces. Banksy does not sell photographs or reproductions of his street graffiti, but art auctioneers have been known to attempt to sell his street art on location and leave the problem of its removal in the hands of the winning bidder.

Banksy's first film, Exit Through the Gift Shop, billed as "the world's first street art disaster movie", made its debut at the 2010 Sundance Film Festival. The film was released in the UK on 5 March 2010.

In January 2011, he was nominated for the Academy Award for Best Documentary for the film. In 2014, he was awarded Person of the Year at the 2014 Webby Awards. Read more... <