Cleaning Through the Ages 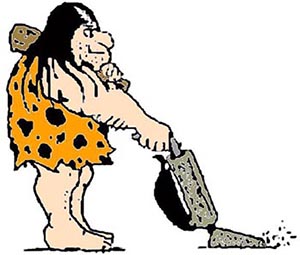 Do you like to clean? Most people hate it, especially as the years go by and one wonders how many times they have cleaned up after themselves and others. Cleaning is part of our existence, but keep things organized without clutter, makes it so much easier. There is a psychology about the way one keeps their home, but that is another blog ... or two.

For now let's go to the history of housework starting with the cavemen. The home has always reflected the lifestyle of a particle society based on anything from survival to luxury. For the caveman it most definitely was about downsizing and survival. He may not have had a tidy cave, but it had to be organized and functional so he could 'make a run for it' should he have to pick up and leave at a moment's notice. Actually today that can still be said of worn torn countries, and those affected by natural disasters.

So what did primitive man do in the way of housekeeping? Hemay have spent more time doing chores than hunting, scientists have suggested. Archaeologists at the University of Cambridge studying the distinctive skeletal features of Neanderthal remains found that compared to modern and most prehistoric homo sapiens, Neanderthals had significantly overdeveloped right arms - in some cases 50% stronger than their left. In the past this has been interpreted as a sign they carried spears in their right hands, but now researchers say the asymmetry was probably the result of less glamorous subsistence tasks. Neanderthals may have spent many arduous hours scraping animals hides using stone tools, possibly to make clothes. The skeletal remains suggest that Neanderthals were doing something intense or repetitive, or both, that had a significant role in their lives.

Through the ages, invention was the way to go to make life easier including housecleaning. From slave labor to hired help, the way we clean our homes has slow evolved with humanity. Though my house is always perfect - I look forward to the day machines do all the work. 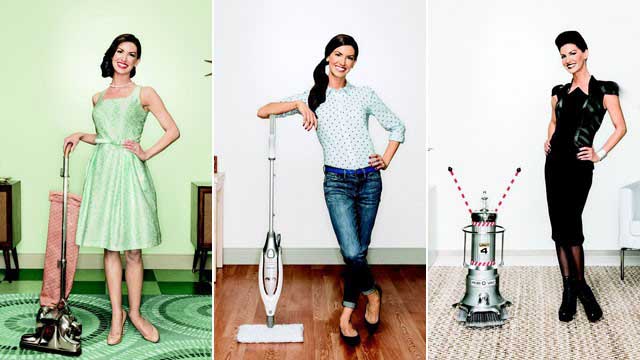 
2800 B.C.: Soaplike residue found clinging to the insides of clay vessels dating from this era proves that the ancient Babylonians had soap. And soap scum.

1500s: In Scotland, stale human urine is used as a cleaning agent for laundry. (They don't tell you that in all those Scottish Highlander romance novels.)

1782: Henry Sidgier is awarded the first British patent for a washing machine that uses a rotating drum. It features a cage with a handle for turning clothes. Inside, wooden rods toss the laundry to and fro.

1856: The how-to book "Enquire Within Upon Everything" advises: "Persons who are accustomed to use tea leaves for sweeping their carpets, and find that they leave stains, will do well to employ fresh cut grass instead."

1886: A typical day for an American housewife includes 8 to 10 trips to the local water source. (It takes 50 gallons to do a single load of laundry!) That's nearly 11 tons of water hauled per year.

1886: Josephine Cochran of Shelbyville, Illinois, irked that the servants chip her fine china in the sink (darn servants!), designs the first dishwasher, a motorized machine with racks that hold dishes in place as soapy water shoots from below. It later makes a splash at the 1893 Chicago World's Fair.

1912: Lysol comes to America from Germany. It's soon advertised as a way to halt the Spanish-influenza epidemic. It's also promoted as a birth-control method and a feminine-hygiene product. Handy!

1913: Five California businessmen invest $100 each to found America's first commercial liquid-bleach factory, using brine extracted from salt ponds. With sodium hypochlorite as its main ingredient, the product is dubbed Clorox. The business takes off when one investor's wife starts giving away free samples at her family's Oakland grocery store to cultivate customer loyalty.

1933: Proctor & Gamble advertises Oxydol soap powder with the then-innovative strategy of sponsoring a radio drama. The genre soon becomes known as - you guessed it - "soap operas."

1937: Betty Boop sings, "I've got those housecleaning blues," in a cartoon. Her Grampy rigs up a Zamboni-esque bicycle-mop (right), plus a player piano that presses laundry. Then Grampy makes her a frothy soda-fountain drink. We want a Grampy.

1965: Studies from this decade show that despite advances in technology, women spend slightly more time on house-work - an average of 55 hours a week - than their grandmothers did.

1980s: The maker of Dawn begins donating dish soap to help clean oil-covered wildlife. Rescue workers find that washing birds with dish soap gets the best results. (In the 1970s, some rescuers had tried mineral oil, sopped up by cornmeal.) Since then, Dawn has helped save more than 75,000 animals.

1998: Executive Order No. 13101 mandates that "environmentally preferable" (a.k.a. green) cleaning products be used in all federal facilities. Because the president says so, that's why.

2012: Washing machines are 98 percent and dishwashers 101 percent more energy-efficient than they were 20 years ago.