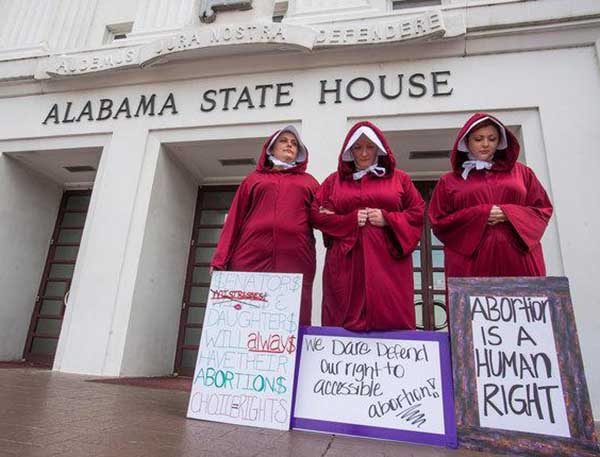 Alabama abortion law holds state's tangled history up to the light
CNN - May 18, 2019

Abortion laws are changing in many states taking women from safe abortions back to high risk. It is always sad to see freedoms that took years to achieve - being taken away and yet that is the pattern of what's happening in America today - highlighted Wednesday with abortion.

You know where I stand on abortion law - Women should always have the right to make decisions about their bodies, but of course I live in a place where all things should be in balance but that's not the play in physical reality.

I never met nor read a woman who didn't believe in abortion no matter where they live and what their background. The fear is family judgment. The thought of carry an unwanted child is not in their programming - but that could change as personal freedoms get taken away. We will never be free until it's over.

There are so many reasons women should be free to have abortions from failed or lack of birth control, rape, incest, DNA potential for health risks to the fetus, the state of the world, emotionally, physically and financially unable to take care of a child, among others. If only these lawmakers (mostly men) were in a personal position that affected their lives like a pregnant daughter or a lover outside of marriage. But that is not the algorithm in which we experience in physical reality. They may also believe it goes against god but they are wrong.

God is a myth. Creation an Illusion. Reality a bipolar experience.


Around 56 million abortions are performed each year in the world, with about 45% done unsafely.Abortion rates changed little between 2003 and 2008,[15] before which they decreased for at least two decades as access to family planning and birth control increased.As of 2008, 40% of the world's women had access to legal abortions without limits as to reason.Countries that permit abortions have different limits on how late in pregnancy abortion is allowed. Historically, abortions have been attempted using herbal medicines, sharp tools, forceful massage, or through other traditional methods. Abortion laws and cultural or religious views of abortions are different around the world. In some areas abortion is legal only in specific cases such as rape, problems with the fetus, poverty, risk to a woman's health, or incest.There is debate over the moral, ethical, and legal issues of abortion. Those who oppose abortion often argue that an embryo or fetus is a human with a right to life, and so they may compare abortion to murder. Those who favor the legality of abortion often hold that it is part of a woman's right to make decisions about her own body. Others favor legal and accessible abortion as a public health measure. Read more