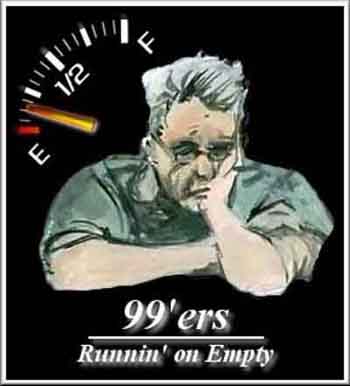 Here's the next pattern of the week - extended unemployment - 99 weeks and beyond. They are called the 99ers. This is what's been told to me by clients and is just out there ....

Many have decided to use the almost two years as a time to stay home and do nothing, especially when their expenses are minimal. They consider the money a gift and believe that after being out of work for two years, a good job awaits their return. They believe high paying jobs are out there.

They do not wish to do part time work, preferring to budget their money carefully.

Most do not want to work again, or feel they cannot work doing something they are not passionate for, or for someone they do not get along with.

Many will find a way to go on disability.

Some have used the time to try one or more start-up businesses, but most are not doing well or never took off due to the recession.

Some have invested in real estate to flip or resell after the housing market allegedly comes back ... or so they hope/think.

Some are using assets to travel and quest for whatever adventure awaits them.

Some have found ways to make money they never would have thought of years ago - like growing and selling medical marijuana to a society that is seeing an increase in substance abuse.

Did someone say, "Heal your issues? Yo! Let's just hang out and get high! A nice warm sunny beach would be the perfect place."

"Sounds good to me."

"Bring your camera and we'll make an independent film."

"Forget it. Let's just play in our dramas till the end of the program."

"Neither one is having a great year!"

"I thought the illegal aliens were just across the border."

"I think we've found a market no one knows about."

"We're gonna be rich. We'll never have to work again."

"Be careful it's not a government ship. Don't want to substitute one joint for another."

"It's not. Look at the guy getting out."

"Welcome to planet Earth. We are the welcoming committee. Nice ship. Can I interest you in something?"

"You've come to the right planet."


Why employers won't hire   MSNBC - December 3, 2010
The problem with bringing down the stubbornly high unemployment rate is that employers are learning to do more with less.