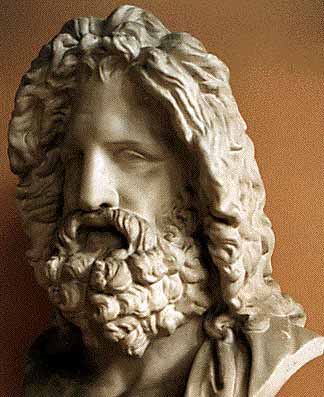 Zeus in Greek mythology is the king of the gods, the ruler of Mount Olympus, and god of the sky and thunder after overthrowing Cronus and displacing the Titans. After the battle with the Titans, Zeus shared the world with his elder brothers, Poseidon and Hades, by drawing lots: Zeus got the sky and air, Poseidon the waters, and Hades the world of the dead (the underworld).

Zeus' symbols are the thunderbolt, eagle, bull and the oak. In addition to his Indo-European inheritance, the classical Zeus also derives certain iconographic traits from the cultures of the ancient Near East, such as the scepter. Zeus is frequently envisaged by Greek artists in one of two poses: standing, striding forward, a thunderbolt leveled in his raised right hand, or seated in majesty.

He has always been associated as being a weather god, as his main attribute is the thunderbolt, he controlled thunder, lightning and rain.

Theocritus wrote circa 265 BCE, Sometimes Zeus is clear, sometimes he rains. He is also known to have caused thunderstorms. In Homer's epic poem the Iliad he sent thunderstorms against his enemies.

His other symbols besides lightning, were the scepter, the eagle and his aegis (the goat-skin of Amaltheia).

Zeus is the continuation of Dyeus, the supreme god in Indo-European religion, also continued as Vedic Dyaus Pitar (Jupiter), and as Tyr (Ziu, Tiw, Tiwaz) in Germanic and Norse mythology. Tyr was however supplanted by Odin as the supreme god among the Germanic tribes and they did not identify Zeus/Jupiter with either Tyr or Odin, but with Thor.

In addition to his Indo-European inheritance, the classical Zeus also derives certain iconographic traits from the cultures of the ancient Near East, such as the scepter. 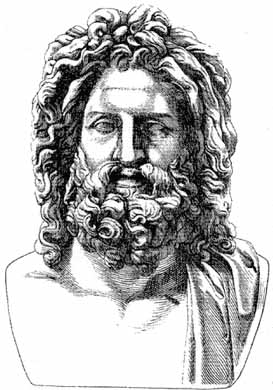 In art, Zeus was usually portrayed as bearded, middle aged but with a youthful figure. Artists always tried to reproduce the power of Zeus in their work, usually by giving him a pose as he is about to throw his bolt of lightening. There are many statues of Zeus, but without doubt the Artemisium Zeus is the most magnificent. 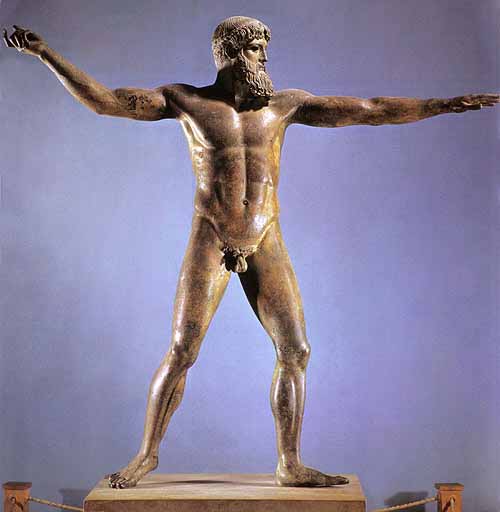 Cronus sired several children by Rhea: Hestia, Demeter, Hera, Hades, Poseidon, but swallowed them all as soon as they were born, since he had learned from Gaia and Uranus that he was destined to be overcome by his own son as he had overthrown his own father. But when Zeus was about to be born, Rhea sought Uranus and Gaia to devise a plan to save him, so that Cronus would get his retribution for his acts against Uranus and his own children. Rhea gave birth to Zeus in Crete, handing Cronus a rock wrapped in swaddling clothes, which he promptly swallowed.


Mount Lykaion: Mythic Birthplace of Zeus Said Found   Live Science - February 10, 2009
The Greek god of thunder and lightning had Earthly beginnings, and scientists think they finally know where. Ancient Greeks first worshipped the omnipotent Zeus at a remote altar on Mount Lykaion, a team of Greek and American archaeologists now think. During a recent dig at the site, the researchers found ceremonial goods commonly used in cult activity and dated at over three millennia old, making them the earliest known "appearance" of Zeus in Greece.

Rhea hid Zeus in a cave on Mount Ida in Crete. According to varying versions of the story: