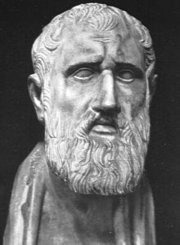 Zeno of Citium (The Stoic) (333 BC-264 BC) was a Hellenistic philosopher from Citium, Cyprus. Zeno was the son of a merchant and a student of Crates of Thebes, the most famous Cynic living at that time in Greece.

Zeno was, himself, a merchant until the age of 42, when he started the Stoic school of philosophy. Named for his teaching platform, the Painted Porch ("stoa" is Greek for "porch"), his teachings were the beginning of Stoicism.

Stoicism is a school of philosophy founded (308 BCE) in Athens by Zeno of Citium (Cyprus). It teaches self-control and detachment from distracting emotions, sometimes interpreted as an indifference to pleasure or pain. This allows one to be a clear thinker, levelheaded and unbiased. In practice, Stoicism is intended to imbue an individual with virtue, wisdom, and integrity of character. Students are encouraged to help those in need, knowing that those who can, should. Stoicism also teaches psychological independence from society, regarding it as an unruly and often unreasonable entity.

Virtue, reason, and natural law are prime directives. By mastering passions and emotions, it is possible to overcome the discord of the outside world and find peace within oneself. Stoicism holds that passion distorts truth, and that the pursuit of truth is virtuous. Greek philosophers such as Cleanthes, Chrysippus, and later Roman thinkers such as Cicero, Seneca the Younger, Marcus Aurelius, Cato the Elder, Cato the Younger, and Epictetus are associated with Stoicism. In Cicero's case, it should be emphasised that while he shared many of the moral tenets of Stoicism, he was not a Stoic himself but an eclectic. Stoic philosophy is usually contrasted with Epicureanism.

Stoicism first appeared in Athens in the Hellenistic period around 301 BCE and was introduced by Zeno of Citium. He taught in the famous stoa poikile (the painted porch) from which his philosophy got its name. Central to his teachings was the law of morality being the same as nature. During its initial phase it was generally seen as a back-to-nature movement critical of superstitions and taboos. The philosophical detachment also encompassed pain and misfortune, good or bad experiences, as well as life or death. Zeno often challenged prohibitions, traditions and customs. Another tenet was the emphasis placed on love for all other beings.

Zeno preached that "man conquers the world by conquering himself". He lectured his students on the value of apatheia, which he explained to be "the absence of passion". Only by controlling one's emotion and physical desire, he argued, could we develop wisdom and the ability to apply thereof. By developing an indifference to pain and pleasure through meditation, the practicing Stoic will develop a wisdom stemming from suppressing the influence of passions, and ultimately, will attain wisdom. He is the inventor of the concept of Kathekon.

Zeno died around 264 BC. La‘rtius reports about his death: "As he left the school, he tripped, fell and broke a toe. Hitting the ground with his hand, he cited words of Niobe: "I am coming, why do you call me thus?". Since the Stoic sage was expected to always do what was appropriate (kathekon) and Zeno was very old at the time, he felt it appropriate to die and consequently strangled himself.

During his lifetime, Zeno received appreciation for his philosophical and pedagogical teachings. Amongst other things, Zeno has been honored with the golden crown, and a tomb was built in honor of his moral influence on the youth of his era. The Zeno crater on the Moon is named in his honor. Zeno