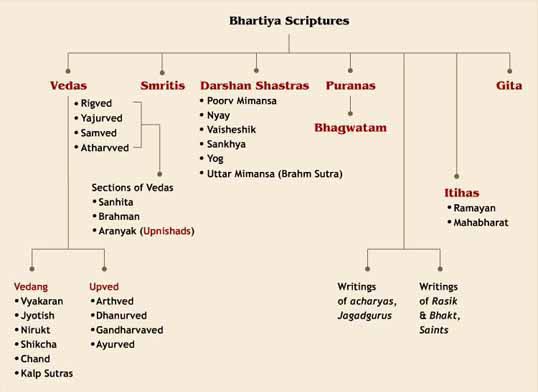 The Vedas are perhaps the oldest written text on our planet today. They date back to the beginning of Indian civilization and are the earliest literary records of the whole Aryan race. They are supposed to have been passed through oral tradition for over 100,000 years. They came to us in written form between 4-6,000 years ago.

The Vedas are divided into four groups, Rigveda, Yajurveda, Samaveda and Atharvaveda. Each group has an original text (Mantra) and a commentary portion (Brahmana).

There are also auxiliary texts called Vedangas. Vedic literature refers to the whole of this vast group of literature. The whole of Rgveda and most of Atharvaveda are in the form of poetry, or hymns to the deities and the elements.

Samaveda is in verses that are to be sung and Yajurveda is largely in short prose passages. Both Samaveda and Yajurveda are concerned with rituals rather than philosophy - especially Yajurveda.

The Rig-Veda Samhita is the oldest significant extant Indian text. It is a collection of 1,028 Vedic Sanskrit hymns and 10,600 verses in all, organized into ten books (Sanskrit: mandalas). The hymns are dedicated to Rigvedic deities. The books were composed by sages and poets from different priestly groups over a period of at least 500 years, which Avari dates as 1400 BCE to 900 BCE, if not earlier According to Max Muller, based on internal evidence (philological and linguistic), the Rigveda was composed roughly between 1700-1100 BCE (the early Vedic period) in the Punjab (Sapta Sindhu) region of the Indian subcontinent. Michael Witzel believes that the Rig Veda must have been composed more or less in the period 1450-1350 BCE. There are strong linguistic and cultural similarities between the Rigveda and the early Iranian Avesta, deriving from the Proto-Indo-Iranian times, often associated with the Andronovo culture; the earliest horse-drawn chariots were found at Andronovo sites in the Sintashta-Petrovka cultural area near the Ural mountains and date to ca. 2000 BCE.

Rigveda means the Veda of Adoration and mostly contains verses adoring or adulating deities. But it also dealt with other subjects, like the procedure of wedding, the folly of gambling. About two-thirds of Rigveda is about the gods Agni (Fire) and Indra (Ruler of the gods). Other Rigvedic gods include Rudra, the two Ashvins,Savitar and Surya, Varuna, the Maruts and the Ribhus. There are references to a divine creeper, the Soma, whose juice was an energizer. Some animals like horses, some rivers, and even some implements (like mortar and pestle) were deified. Rigveda contains a sense of intimate communion between Nature and the Rishis or visionaries. According to some, the concerns of Rigveda are those of simple, nomadic, pastoral Aryans. According to others, the people in the times of the Rigveda had a settled home, definite mode of life, developed social customs, political organizations, and even arts and amusements. Rigveda is the oldest, largest and most important of the Vedas, containing ten thousand verses forming 1017 poems in 20 groups.

The Yajur-Veda ("Veda of sacrificial formulas") consists of archaic prose mantras and also in part of verses borrowed from the Rig-Veda. Its purpose was practical, in that each mantra must accompany an action in sacrifice but, unlike the Sama-Veda, it was compiled to apply to all sacrificial rites, not merely the Soma offering. There are two major recensions of this Veda known as the "Black" and "White" Yajur-Veda. The origin and meaning of these designations are not very clear. The White Yajur-Veda contains only the verses and sayings necessary for the sacrifice, while explanations exist in a separate Brahmana work. It differs widely from the Black Yajurveda, which incorporates such explanations in the work itself, often immediately following the verses. Of the Black Yajurveda four major recensions survive, all showing by and large the same arrangement, but differing in many other respects, notably in the individual discussion of the rituals but also in matters of phonology and accent.

Yajurveda refers to acts of worship such as oblations made into Agni or Fire. It has two branches, Krishna or Black and Shukla or White. While both contain mantras or incantations to be chanted at rituals, Black Yajurveda also has many explanations. The recensions of Black Yajurveda are Taittirya, Katthaka, Maitrayani and Kapishtthala. Those of White Yajurveda are Madhyanadina and Kanva. The literary value of Yajurveda is mostly for its prose, which consists of short terse sentences full of meaning and cadence.

The Sama-Veda is the "Veda of chants" or "Knowledge of melodies". The name of this Veda is from the Sanskrit word saman which means a metrical hymn or song of praise. It consists of 1549 stanzas, taken entirely (except 78) from the Rig-Veda. Some of the Rig-Veda verses are repeated more than once. Including repetitions, there are a total of 1875 verses numbered in the Sama-Veda recension published by Griffith. Two major recensions remain today, the Kauthuma/Ranayaniya and the Jaiminiya. P> Its purpose was liturgical and practical, to serve as a songbook for the "singer" priests who took part in the liturgy. A priest who sings hymns from the Sama-Veda during a ritual is called an udgat, a word derived from the Sanskrit root ud-gai ("to sing" or "to chant"). A similar word in English might be "cantor". The styles of chanting are important to the liturgical use of the verses. The hymns were to be sung according to certain fixed melodies; hence the name of the collection.

Samaveda consists of a selection of poetry mainly from the Rigveda, and some original matter. It has two parts, Purva-Archika (First Adoratona) and Uttar-Archika (Later Adoration), containing verses addressed to the three gods Agni (Fire), Indra (King of Gods) and Soma (Energizing Herb). The verses are not to be chanted anyhow, but to be sung in specifically indicated melodies using the seven svaras or notes. Such songs are called Samagana and in this sense Samaveda is really a book of hymns.

Atharvaveda contains first class poetry coming from visionary poets, much of it being glorification of the curative powers of herbs and waters. Many poems relate to diseases like cough and jaundice, to male and female demons that cause diseases, to sweet-smelling herbs and magic amulets, which drive diseases away. There are poems relating to sins and their atonement, errors in performing rituals and their expiatory acts, political and philosophical issues, and a wonderful hymn to Prithvi or Mother Earth.


The Vedas describe the

The Upanishads are regarded as part of the Vedas and as such form part of the Hindu scriptures. They primarily discuss philosophy, meditation, and the nature of God; they form the core spiritual thought of Vedantic Hinduism. Considered as mystic or spiritual contemplations of the Vedas, their putative end and essence, the Upanishads are known as Vedanta ("the end/culmination of the Vedas"). The Upanishads do not belong to a particular period of Sanskrit literature. The oldest, such as the Brhadaranyaka and Chandogya Upanishads, may date to the Brahmana period (roughly before the 31st century BC; before Gita was constructed), while the youngest, depending on the canon used, may date to the medieval or early modern period.

The word Upanishad comes from the Sanskrit verb sad (to sit) and the two prepositions upa and ni (under and at). They are sacred tests of spiritual and philosophical nature. Vedic literature is divided into karmakanda containing Samhitas (hymns) and Brahmanas (commentaries), and gyanakanda containing knowledge in the form of the Aranyakas and Upanishads. Thus each Upanishad is associated with a Veda, Isha-upanishad with Shukla Yajurveda, Kena-upanishad with Samaveda, and so on.

The earliest Upanishads may have been composed between B.C. 800 and 400.There have been several later additions, leading to 112 Upanishads being available today. But the major Upanishads are ten, Isha, Kena, Kattha, Prashna, Mundaka, Mandukya, Taittiriya, Aitareya, Shwetashwatara, Chhandogya and Brihadaryanyaka. The teachings of the Upanishads, and those of the Bhagavat Gita, form the basis of the Vedanta philosophy.