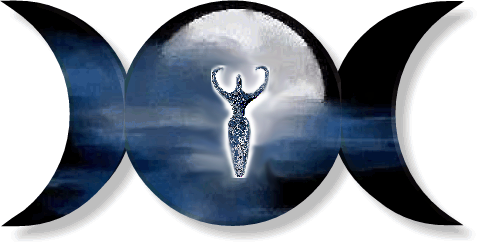 The triple moon is a Goddess symbol that represents the Maiden, Mother, and Crone as the waxing, full, and waning moon. It is also associated with feminine energy, mystery and psychic abilities. You often see this symbol on crowns or other head-pieces, particularly worn by High Priestesses.

The Crone represents wisdom, repose, and compassion. The Crone in Greek mythology is Hecate - wise, knowing, a culmination of a lifetime of experience. Crone goddesses include: Hel, Maman Brigitte, Oya, Sedna, Skuld, and others.

These aspects may also represent the cycle of birth, life and death (and rebirth). Neopagans believe that this goddess is the personification of all women everywhere.

Followers of the Wiccan, Dianic, and Neopagan religions, as well as some archeologists and mythographers, believe that long before the coming of the Abrahamic religions of Judaism, Christianity, and Islam, the Triple Goddess embodied the three-fold aspect of Gaia, the Earth Mother (Roman Magna Mater). A mother goddess was worshipped under a variety of names not only in the Ancient Near East and the Aegean and Anatolia, but also in pre-Islamic Arabia.

Neopagans also claim historical antecedent for their beliefs, holding that in Old Europe, in the Aegean world, and in the most ancient Near East, the Triple Goddess preceded the coming of nomadic speakers of Indo-European languages.

In South Arabia the moon-god Hubal was accompanied by the three goddesses: Uzza the youngest, Al-Lat "The Goddess" and Manat the Crone, the three cranes.

Wiccans often work with the Goddess in her triple form but may sometimes look at a particular goddess as Maiden, Mother and Crone even when there is no historical proof of this. An example of this would be the goddess Hecate, who was originally depicted as three maidens when in triplicate or as an old woman by herself in later times. Another example is the goddess Morrigan.

Another cross-cultural archetype is the three goddesses of Fate. In Greek Mythology they are the Moirai; in Norse mythology they are the Norns. The Weird Sisters of Shakespeare's Macbeth and Wyrd Sisters of Terry Pratchett's novel of the same name are believed to be inspired by these Fates. The three supernatural female figures called variously the Ladies, Mother of the Camenae, the Kindly Ones, and a number of other different names in The Sandman graphic novels by Neil Gaiman play self-consciously on both the triple Fates and the Maiden-Mother-Crone goddess archetypes. 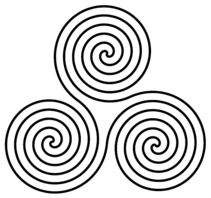 The Celtic triple spiral or triskele symbol is sometimes called the spiral of life and was found in the Newgrange site from the Bronze Age in Ireland. The triple spiral is an ancient symbol of Celtic beliefs, and was used consistently in Celtic art for 3 millennia. The Celts believed that all life moved in eternal cycles, regenerating at each point. Celts also believed that all important things came in three phases; for example: birth, death and rebirth and mind, body and spirit.

The triple spiral later became the triskele used in Christian manuscripts. In neopagan religions, the triple spiral is also used to represent the triple goddess. According to Uriel's Machine by Knight and Lomas (2003) the triple spiral may represent the nine month period of human pregnancy, since the sun takes a fourth of a year to go from the celestial equator (an equinox) to extreme north or south declination (a solstice), and vice versa. During each three-month period, the sun's path appears to form a closely-wound quasi-helical shape, which can be likened to a spiral, so that three spirals could represent nine months, providing an explanation for a link between fertility and the triple-spiral symbol.