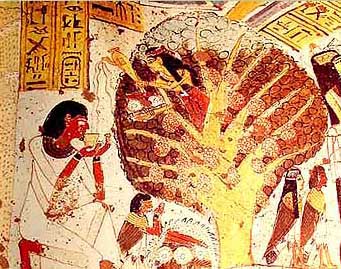 At various locals in the in the ancient world, trees were associated with different gods, and Egypt was certainly no exception. We know of no trees, or for that matter other vegetation in Egypt that was honored as specific gods as were bulls or rams, for example. Nevertheless, various vegetation was connected to gods and goddess in one way or another, or generally to Egyptian religion and specifically the afterlife.

There were several deities that were associated with trees, a rare commodity in Egypt. Horus was associated with the acacia, while Osiris and Re were tied with the willow and the sycamore, respectively. Osiris was sheltered by a willow after he was killed, and for example, the The Book of the Dead describes two "sycamores of turquoise" growing at the point on the eastern horizon where the sun-god rises each morning. Re was also associated with the ished tree. Also, Wepwawet was paired with the Tamarisk, and the symbol of the god Heh was a palm branch, while not surprisingly, we have both Thoth and Seshat, the two deities associated with writing, inscribing the leaves of either the ished (or persea) tree with the Royal Titulary and the number of years in the pharaoh's reign. 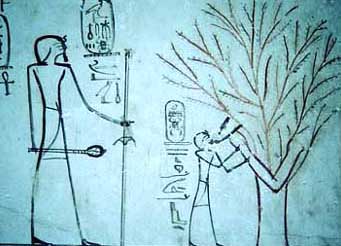 However, none of these mail deities were associated with trees nearly as much as a number of female deities. The sycamore specifically was regarded as a manifestation of the goddesses Nut, Isisand Hathor, who was even given the title, "Lady of the Sycamore".ĘIn fact, this title has been interpreted to relate to a specific and particularly old tree that once stood to the south of the Temple of Ptah at Memphis during the Old Kingdom.

The Sycamore tree was of special significance in Egyptian religion. It was the only native tree of useful size and sturdiness in Egypt, and perhaps very significantly, most often grew along the edge of the desert, which would have also placed it near or in the necropolises. 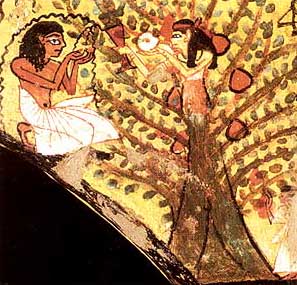 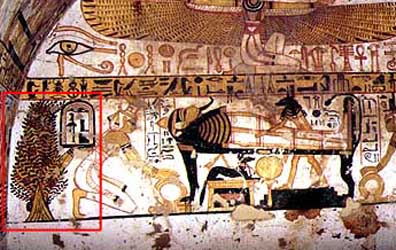 There were also a number of minor tree goddesses who were depicted in a number of ways. There were simply images of trees labeled as goddesses as well as fully anthropomorphic personifications of tree goddesses. Perhaps the most unusual representation is that of the upper body of a goddess rising from the trunk at the center of a tree, or sometimes a tree sprouting out of the head, such as in the case of Nut. 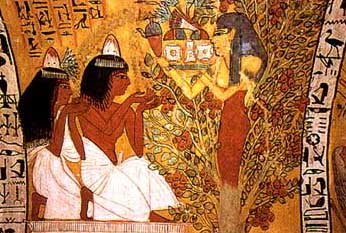 Many representations were made depicting Hathor, Nut or some other goddess reaching out from a tree to offer the deceased food and water. Sometimes only the arms of the goddess were shown providing food or water and in the tomb of Tuthmosis III, the king is shown being nursed at the breast of "his mother Isis" in the form of a sycamore tree. Hathor had an especially important role in the afterlife of the deceased.

In tomb depictions, the deceased, frequently accompanied by his wife, was shown sitting under or near the branches of a tree, with Hathor sprouting from the trunk, enjoying the fruit and drink offered by this goddess. An excellent example of such a representation is in the Theban tomb of Sennedjem.

Scenes and inscriptions clearly show a link between the tree-goddess, the symbol of renewal, and the dead in the form of the avian Ba, for as a bird, the soul of the dead was attracted to, and nourished by the tree.

Notably, the identification of several maternal deities as tree goddesses also meant that burial in a wooden coffin was viewed as a return to the womb of the mother goddess. 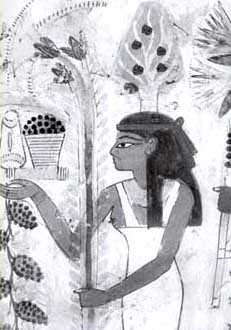