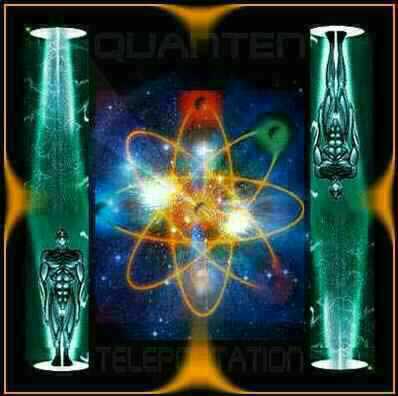 Teleportation is the transfer of matter from one point to another, more or less instantaneously. Teleportation has been widely utilized in works of science fiction. In some forms, it has also appeared in physical theories.

A copy is made and the original is destroyed.

One means of teleportation proposed in fiction (e.g., The Fly, Star Trek) is the transmission of data which is used to precisely reconstruct an object or organism at its destination. However, it would be impossible to travel from one point to another instantaneously; faster than light travel, as of today, is believed to be most likely impossible. The use of this form of teleportation as a means of transport for humans would have considerable unresolved technical issues, such as recording the human body with sufficient accuracy to allow reproduction elsewhere (i.e., because of the uncertainty principle).

There's also the philosophical issue of whether destroying a human in one place and recreating a copy elsewhere would provide a sufficient experience of continuity of existence. The reassembled human might be considered a different sentience with the same memories as the original, as could be easily proved by constructing not just one, but several copies of the original and interrogating each as to the perceived uniqueness of each.

Each copy constructed using merely descriptive data, but not matter, transmitted from the origin and new matter already at the destination point would consider itself to be the true continuation of the original and yet this could not logically be true; moreover, because each copy constructed via this data-only method would be made of new matter that already existed at the destination, there would be no way, even in principle, of distinguishing the original from the copies. Many of the relevant questions are shared with the concept of mind transfer. Read more


Quantum Teleportation Was Just Achieved With 90% Accuracy Over a 44km Distance   Science Alert - December 31, 2020
Scientists are edging closer to making a super-secure, super-fast quantum internet possible: they've now been able to 'teleport' high-fidelity quantum information over a total distance of 44 kilometres (27 miles). Both data fidelity and transfer distance are crucial when it comes to building a real, working quantum internet, and making progress in either of these areas is cause for celebration for those building our next-generation communications network.


Shades of 'Star Trek'? Quantum Teleportation Sets Distance Record   Live Science - September 22, 2015
A record-breaking distance has been achieved in the bizarre world of quantum teleportation. Scientists teleported photons (packets of light) across a spool of fiber optics 63 miles (102 kilometers) long, four times farther than the previous record. This research could one day lead to a "quantum Internet" that offers next-generation encryption, the scientists said. Teleporting an object from one point in the universe to another without it moving through the space in between may sound like science fiction pulled from an episode of "Star Trek," but scientists have actually been experimenting with "quantum teleportation" since 1998.


Quantum Teleportation Reaches Farthest Distance Yet   Live Science - December 8, 2014
A new distance record has been set in the strange world of quantum teleportation. In a recent experiment, the quantum state (the direction it was spinning) of a light particle instantly traveled 15.5 miles (25 kilometers) across an optical fiber, becoming the farthest successful quantum teleportation feat yet. Advances in quantum teleportation could lead to better Internet and communication security, and get scientists closer to developing quantum computers. About five years ago, researchers could only teleport quantum information, such as which direction a particle is spinning, across a few meters. Now, they can beam that information across several miles.


Beam me up ... Quantum teleporter breakthrough   PhysOrg - April 15, 2011
Researchers have achieved a breakthrough in quantum communications and computing using a teleporter and a paradoxical cat. The breakthrough is the first-ever transfer, or teleportation, of a particular complex set of quantum information from one point to another, opening the way for high-speed, high-fidelity transmission of large volumes of information, such as quantum encryption keys, via quantum communications networks. Teleportation - the transfer of quantum information from one location to another using normal, "classical" communications - is one of the fundamental quantum communication techniques. The cat in the equation was not a living, breathing feline but rather "wave packets" of light representing the famous "thought experiment" known as Schrodinger's Cat. Schrodinger's Cat was a paradox proposed by early 20th century physicist Erwin Schrodinger to describe the situation in which normal, "classical" objects can exist in a quantum "superposition" - having two states at once.


Quantum Leap: Bits of Light Teleported to Another Place   Live Science - April 15, 2011
Our world is getting closer to "Star Trek" every day, it seems. Scientists announced today they've been able to teleport special bits of light from one place to another, a la "Beam me up, Scotty." While the advance doesn't necessarily mean we'll ever be able to teleport people, it does represent some pretty nifty, mind-bending physics. Teleportation requires taking advantage of a quirk of quantum physics called entanglement. Two particles can be bonded so that even when separated by large distances, they communicate instantly, and what happens to one affects the other. It's a situation so bizarre Einstein called it spooky action at a distance.


Quantum teleportation achieved over 16 km   PhysOrg - May 20, 2010
Scientists in China have succeeded in teleporting information between photons further than ever before. They transported quantum information over a free space distance of 16 km (10 miles), much further than the few hundred meters previously achieved, which brings us closer to transmitting information over long distances without the need for a traditional signal. Quantum teleportation is not the same as the teleportation most of us know from science fiction, where an object (or person) in one place is Ňbeamed upÓ to another place where a perfect copy is replicated. In quantum teleportation two photons or ions (for example) are entangled in such a way that when the quantum state of one is changed the state of the other also changes, as if the two were still connected. This enables quantum information to be teleported if one of the photons/ions is sent some distance away.


Teleportation Milestone Achieved   Live Science - January 23, 2009
Scientists have come a bit closer to achieving the "Star Trek" feat of teleportation. No one is galaxy-hopping, or even beaming people around, but for the first time, information has been teleported between two separate atoms across a distance of a meter - about a yard. This is a significant milestone in a field known as quantum information processing, said Christopher Monroe of the Joint Quantum Institute at the University of Maryland, who led the effort. Teleportation is one of nature's most mysterious forms of transport: Quantum information, such as the spin of a particle or the polarization of a photon, is transferred from one place to another, without traveling through any physical medium. It has previously been achieved between photons (a unit, or quantum, of electromagnetic radiation, such as light) over very large distances, between photons and ensembles of atoms, and between two nearby atoms through the intermediary action of a third. -


First Teleportation Between Light and Matter   Scientific American - October 5, 2006
At long last researchers have teleported the information stored in a beam of light into a cloud of atoms, which is about as close to getting beamed up by Scotty as we're likely to come in the foreseeable future. More practically, the demonstration is key to eventually harnessing quantum effects for hyperpowerful computing or ultrasecure encryption systems.


Teleportation goes long distance   BBC - August 18, 2004
Physicists have carried out successful teleportation with particles of light over a distance of 600m across the River Danube in Austria. Long distance teleportation is crucial if dreams of superfast quantum computing are to be realized. When physicists say "teleportation", they are describing the transfer of key properties from one particle to another without a physical link.