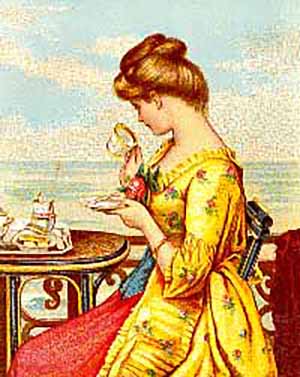 The art of reading tea leaves is referred to as Tasseography (or Tasseomancy) and is a divination or fortune-telling method that in western tradition interprets patterns in tea leaves. The term also refers to the reading of coffee grounds, especially in the Middle Eastern tradition. The term has also been applied to the reading of wine sediments. The term derives from the French word tasse (cup), which in turn derives from the Arabic tassa (cup).Tasseography, otherwise known as tasseomancy or tassology, is the art of tea leaf reading. "Tasse" or "tass" is an Arab root, meaning small cup or goblet.

The beverage, Tea, is linked with herbology part of alternative healing. People who seek answers through various forms of divination, such as tea leaf readings, are often healing their issues.

Tea leaf reading is an ancient practice interpreting patterns made by tea leaves in the cup. In addition to the reading of tea leaves, the tradition of tasseography includes the reading of coffee grounds and wine sediments. Although tasseography is commonly associated with Gypsy fortunetellers, the tradition of tea leaf reading arises independently from Asia, the Middle East and Ancient Greece.

Modern tasseography has also been associated with the Scottish, Irish and cultures throughout Eastern Europe.

The significance of the ubiquitous, cross cultural and historical pervasiveness of tea, coffee and sediment reading may be related to the primal human desire for understanding the self. Just as psychological analysis grew prodigiously during the Victorian era, tasseography became popularized as a parlor game. But the practice distinguishes itself from amorphic fortune telling, mystical, occult or other magical activities. Specifically, tasseography is not an application of magic, but rather a tool for tapping into the subconscious by applying meditation to pattern recognition and symbolism.

Tasseography can be a powerful meditative tool providing insights into the reader's subconscious. The significance of symbolism in psychological study finds theoretical foundation from Plato through Carl Jung.

From a modern sociobiological standpoint, procedures such as drinking from the opposite hand, may coordinate left and right brain activity to stimulate creative problem solving. Common sense indicates that slowing down to focus and organize one's own thoughts is an effective problem solving methodology.

The process of tasseography stimulates the imagination to create individualized interpretations and solutions. Tea leaf reading is a fun, healthful and creative way to listen to yourself and open your psychic abilities.

In certain western circles that take this form of divination seriously, it is considered ill-advised for one to attempt tasseography using tea from a cut-open tea bag, to substitute loose coffee in place of tea, or to use a symbol dictionary. 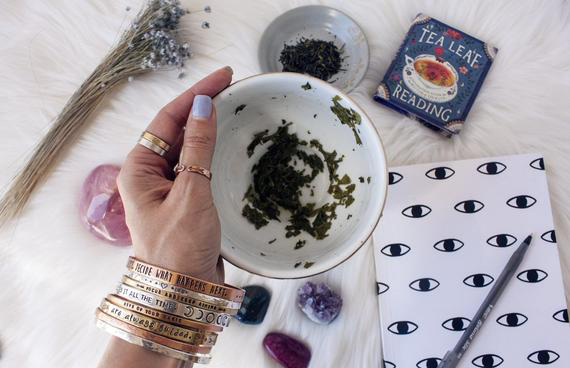 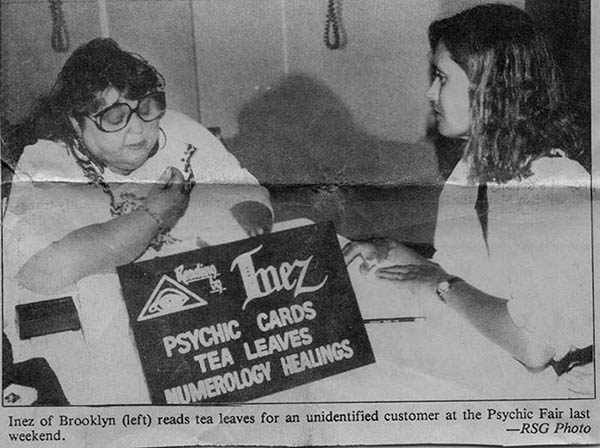 Back in the 1980's one of my first teachers here in Brooklyn was a psychic named Inez who used tea leaves to help her focus on the messages in her readings.

Inez was a heavyset woman in her 60s who wore a scarf on her head and looked like something out of a TV show or movie as she sat at a clothed covered table with a deck of tarot cards, a few crystals, and ingredients to do a tea leaf reading. She was very colorful having been a Vegas showgirl back in the day. She never stopped telling me how good she thought I was as a psychic and would become famous. She even took me to a store in Long Island where we found the nine-foot pyramid which was my brand for years as the Psychic in the Pyramid.

At home - or doing psychic fairs in Long Island - Inez would prepare a fresh pot of tea at the start of the day using tea grounds. When the tea cooled she kept it in a covered Tupperware container for the day.

When she read a client she would hand them a white styrofoam cup and a teaspoon. They held the cup in one hand and with the other hand would take some grounds and place them in the cup along with a tiny drop of tea. Then the client would swoosh the tea round and round, sending the grounds to all sides of the cup.

Grounds stuck to the sides of the cup in various designs which Inez 'read'. The further down the cup the image was the longer it would take to manifest in physical reality. Images close to the top of the cup would manifest sooner.

It was easy to see that she was using her psychic abilities as well as her experience as a tea leaf reader.

In July 2004 I read a Turkish man who reads coffee grounds. He came to my home with a special coffee pot, Turkish coffee, a cup, and a saucer. He showed me how to brew the coffee and prepare the grounds. I read his coffee grounds and told him he would marry quickly and who the woman was. He met then married her six months later. He also read my coffee grounds, but was too vague in what he saw. Luckily he did readings as a sideline and kept his day job. 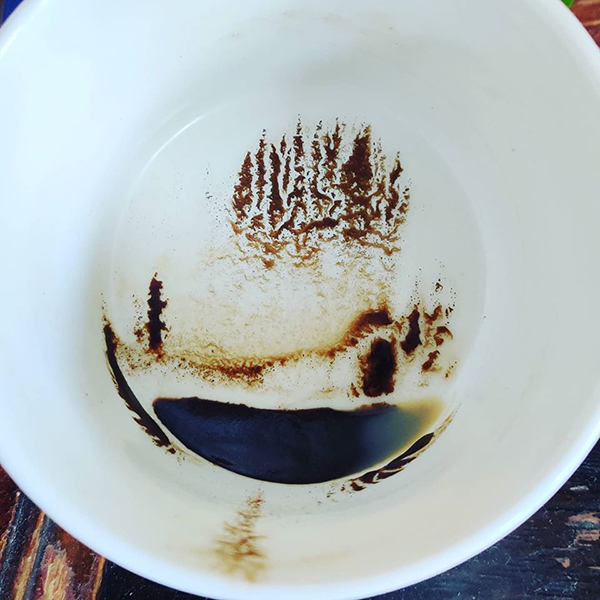 Cultures of the Middle East that practice divination in this fashion usually use left-over coffee grounds from Turkish coffee turned over onto a plate.

Traditionally, Turkish coffee is used for this, or any coffee that has grounds that sit at the bottom of the cup. The grounds are necessary to form "pictures" to be interpreted. The drinker of the coffee cannot read his or her own cup. The cup must be read by someone else. Most of the liquid in the coffee is drunk, but the sediment at the bottom is left behind.

The coffee grounds are given time to settle and dry against the cup before a reading begins. The same is true with tea leaves.

After a reading, in Armenian or Middle Eastern traditions, the drinker will be asked to "open the heart". This is done by placing the right thumb at the inside bottom of the cup and twisting clockwise slightly. This will leave an impression behind that the fortune teller will interpret as the drinker's inner thoughts or emotions.

Many interpretations for symbols exist, but one common thread is the color of the symbols. Since most cups used are white and the grounds are dark, creating good contrast for the symbols. White is considered as a "good" symbol foretelling of generally positive things for the drinker. The grounds are considered as "bad" symbols foretelling of generally negative things for the drinker.

Symbols can be many things including people, animals, and inanimate objects, etc. As a tea leaf reader, the images often come alive for me, as if a hologram, creating a message. Two or more symbols grouped together will may link to the same message, theme. The closer the symbol to the top of the cup, the sooner the event will happen. The thicker the symbol, the stronger the impact on the person's life.

Most symbols can be read in both a positive or negative context. This is up to the person doing the reading and always subjective. The best way to interpret a symbol is to view it, then use your psychic abilities to make an interpretation.

Here is an example ... You see the letter 'J' - a common letter in these types of readings. Does 'J' refer to a person, place, event, other. Look at the symbols near the 'J'. Is there another 'J'? Take your time and think it through. Skilled psychics can quickly get the answer. It comes with practice.

ACORN - at the top means success and gain: At the bottom means good health.

AIRCRAFT - journey; if broken means danger of accident; can also mean a rise in position

BOAT - lifepath, (note size and speed of boat), and visit from a friend, protection

BOOK - you will find your answer by something written, if open it's good news; if closed you need to investigate something

DAGGER - warning, danger from self or others, power

DOOR - opening (to something new) or closing (old issues and relations), spiritual (portal)

FINGER - which finger, pointing in what direction, pointing to god

FRUIT - fruitful, prosperity (depends on the fruit which goes to seeds and planting something new)

GOAT - be careful of enemies

HAMMER - hard work needed, getting a point across

HAND - of god, creation, if open means friendship; if closed means an argument

HORSE - if galloping means good news; if just the head means a lover or nebula , new

INSECT - depends which one

LADDER - promotion, a rise or fall in life, DNA

LAMP - turned on means enlightenment, at the top means a feast; at the side means secrets revealed; at the bottom means postponement

MOUNTAIN - obstacles or a specific area

MUSHROOM - at top means journey or moving to the country; near bottom means rapid growth; if reversed means frustration, psychedelics

OSTRICH - travel, not seeking a truth

PARROT - repeating something, a twin, a journey, people talking and saying nothing

RABBIT - need for bravery, time and illusion, Alice in Wonderland

ROSE - Rose bloodline, creation, flower of life, love, may be accompanied by a fragrance in the room

SNAKE - DNA, wisdom, or if the snake is attacking, an enemy

TRIANGLE - something unexpected, 3 in a relationship, pyramids, 3, third dimension

Remember, when interpreting the images - use your psychic abilities to get more information. You can also use a Dream Dictionary or a book that details symbols and archetypes to get further clarification of the images you see. As consciousness is evolving, so too are the meaning of the symbols. Try to see them as holograms.