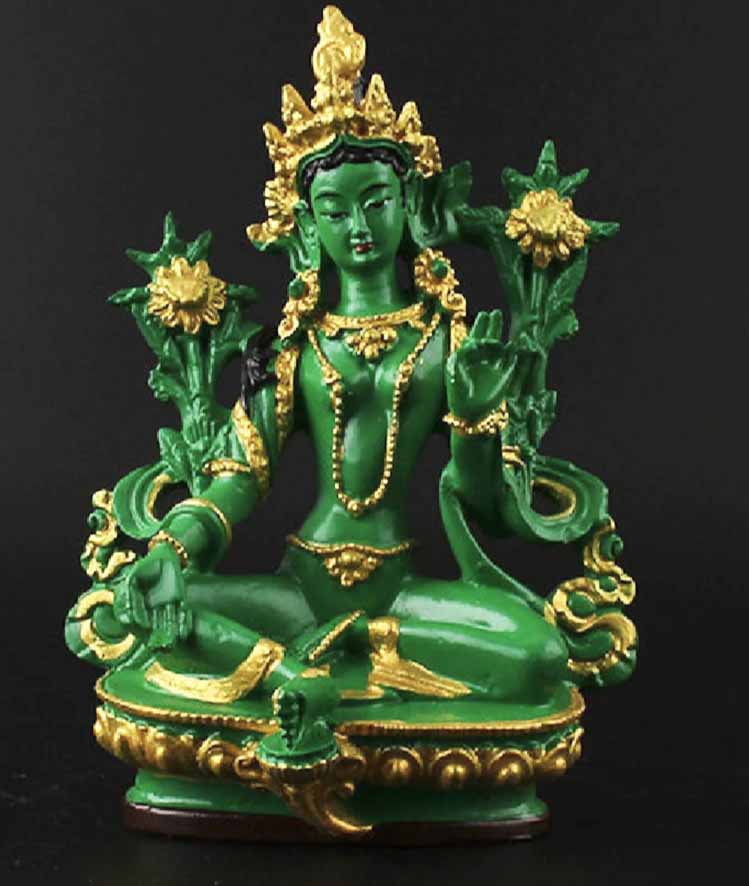 Goddess of Compassion - One Who Saves


Diamonds are Her Sacred Stone.

Tara or Arya Tara, also known as Jetsun Dolma, is a female Bodhisattva typically associated with Tibetan Buddhism. She is the "mother of liberation", and represents the virtues of success in work and achievements.

Tara is actually the generic name for a set of Bodhisattvas of similar aspect. These may more properly be understood as different aspects of the same quality, as Bodhisattvas are often considered metaphoric for Buddhist virtues. As Mahatara, Great Tara, she is the supreme creatrix and mother of all the Buddhas and Bodhisattvas.

Tara is the Feminine Goddess Archetype in Hindu Mythology. Tara governs the Underworld, the Earth and the Heavens, birth, death and regeneration, love and war, the seasons, all that lives and grows, the Moon cycles - Luna - feminine - creation. Typically Tara is seen as a slender and beautiful woman of white complexion, long golden hair and blue eyes.

Her animals are the sow, mare, owl and raven.

She is the most popular figure in the Tibetan pantheon of deities, the beautiful goddess Tara, (pronounced tah' rah) whose name in means 'Star' - originated in Indian Hinduism as the Mother Creator, and her many representations spread from Ireland to Indonesia under many different names.https://i.etsystatic.com/25540063/r/il/2d86ff/2735838984/il_1588xN.2735838984_fq86.jpg

In later Hindu scriptures, she is depicted as one of the eight major aspects of the Divine Feminine Principle, a loving manifestation in contrast to the fiercesome Kali. Like a star that perpetually consumes its own energy, Tara represents the never-ending desires that fuel all life.

Adopted by Buddhism from Hinduism by the 3rd century B.C. , Tara appears in Buddhism, Jainism, and particularly, Tibetan Lamaism, as a complex array of manifestations: goddess of ascetism and mysticism, mother creator, protectress of all humans as they cross the sea of life.

The most widely known Taras are:

There is also recognition in some schools of Buddhism of twenty-one Taras. A practice text entitled "In Praise of the 21 Taras", is recited during the morning in all four sects of Tibetan Buddhism. Some Tibetan Buddhists practice a mantra meditation called Tara Practice. The main Tara mantra is; Om Tare Tu Tare Ture Soha.

The original bronze statue dating back to the 7th or 8th century A.D was found in the north-east of Lanka between Trincomalee and Batticaloa. Its total height is 143.75 cm or 56.6 inches. Her right hand is in the gesture of vara mudra and her left hand is in the gesture of vitarka mudra. The marked contrast of the slender waist against heavy breasts and hips is the ideal of feminine beauty. The goddess, dignified and graceful in this manifestation, represents the chastity and virtue and the embodiment of love, compassion, and mercy. 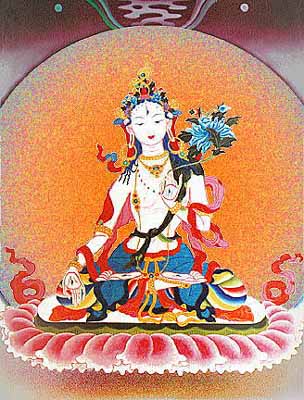 The vibrations of the name Tara can is found in other cultures.

Finland: An ancient legend speaks of Tar, the Women of Wisdom.

South America: indigenous tribe in the jungle call to their goddess, Tarahumara.

Native American: Cheyenne people tell of a Star Woman who fell from the heavens to the Earth. Out of her body all essential food grew. She sent her people to mate with the more primitive inhabitants of Earth, thereby giving them the capacity for wisdom.

Tara is known as The Faithful One, The Fierce Protectress, an archetype of inner wisdom. They speak of a transformation of consciousness, a journey to freedom. They teach many simple and direct means for each person to discover within themselves the wisdom, compassion and glory that is Tara. She is the feminine counterpart of the bodhisattva - Buddha-to-be - Avalokitesvara.

According to popular belief, she came into existence from a tear of Avalokitesvara, which fell to the ground and formed a lake. Out of its waters rose up a lotus, which, on opening, revealed the goddess. Like Avalokitesvara, she is a compassionate deity who helps souls 'cross to the other shore'. She is the protectress of navigation and earthly travel, as well as of spiritual travel along the path to Enlightenment.

In Tibet she is believed to be incarnate in every pious woman, and the two wives - a Chinese princess and a Nepali princess - of the first Buddhist king of Tibet, Srong-brtsan-sgam-po, were identified with the two major forms of Tara. The White Tara (Sanskrit: Sitatara; Tibetan: Sgrol-dkar) was incarnated as the Chinese princess. She symbolizes purity and is often represented standing at the right hand of her consort, Avalokitesvara, or seated with legs crossed, holding a full-blown lotus. She is generally shown with a third eye.

Tara is sometimes shown with eyes on the soles of her feet and the palms of her hands. Then she is called Tara of the Seven Eyes, a form of the goddess popular in Mongoli. 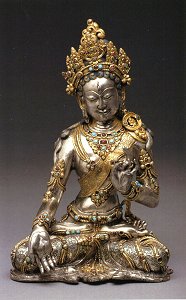