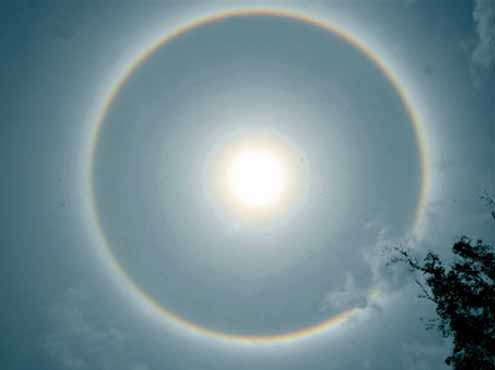 A solar halo - also known as a nimbus, icebow or gloriole - is an optical phenomenon produced by ice crystals creating colored or white arcs and spots in the sky. Many are near the sun or moon but others are elsewhere and even in the opposite part of the sky. They can also form around artificial lights in very cold weather when ice crystals called diamond dust are floating in the nearby air.

There are many types of ice halos. They are produced by the ice crystals in cirrostratus clouds high (5-10 km, or 3-6 miles) in the upper troposphere. The particular shape and orientation of the crystals is responsible for the type of halo observed. Light is reflected and refracted by the ice crystals and may split up into colors because of dispersion. The crystals behave like prisms and mirrors, refracting and reflecting sunlight between their faces, sending shafts of light in particular directions.

Atmospheric phenomena such as halos were used as part of weather lore as an empirical means of weather forecasting before meteorology was developed. They often do mean that rain is going to fall within the next 24 hours as the cirrostratus clouds that cause them can signify an approaching frontal system. Other common optical phenomena involving water droplets rather than ice crystals include the glory and the rainbow.


A Colorful Solar Corona over the Himalayas January 11, 2016

What are those colorful rings around the Sun? A corona visible only to Earth observers in the right place at the right time. Rings like this will sometimes appear when the Sun or Moon is seen through thin clouds. The effect is created by the quantum mechanical diffraction of light around individual, similarly-sized water droplets in an intervening but mostly-transparent cloud. Since light of different colors has different wavelengths, each color diffracts differently. Solar Coronae are one of the few quantum color effects that can be easily seen with the unaided eye. This type of solar corona is a visual effect due to water in Earth's atmosphere and is altogether different from the solar corona that exists continually around the Sun -- and stands out during a total solar eclipse. In the foreground is the famous Himalayan mountain peak Ama Dablam (Mother's Necklace), 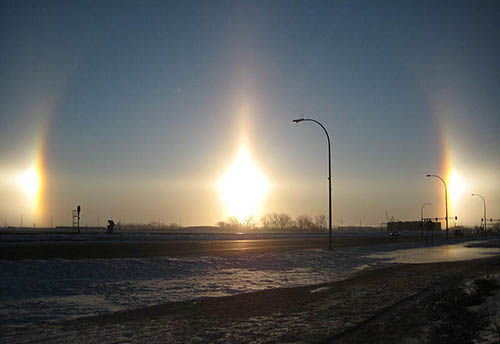 A sun dog or sundog (scientific name parhelion, plural parhelia, e.g. "with the sun") is a relatively common halo, an atmospheric optical phenomenon mostly associated with the refraction of sunlight by small ice crystals making up cirrus or cirrostratus clouds. Another term used is sunbow (an arch resembling a rainbow made by the sun shining through vapor or mist).

Sundogs typically, but not exclusively, appear when the sun is low, e.g. at sunrise and sunset, and the atmosphere is filled with ice crystals forming cirrus clouds, but diamond dust and ice fog can also produce them. They are often bright white patches of light looking much like the sun or a comet and are occasionally confused with those phenomena. Sometimes they exhibit a spectrum of colors, ranging from red closest to the sun to a pale bluish tail stretching away from the sun.

The ice crystals causing atmospheric phenomenon are shaped as hexagonal prisms (ice Ih, e.g. with a hexagonal top and bottom and six rectangular sides). Some of these crystals are elongated, some flat; the latter causing crisp and bright sundogs if evenly oriented with their hexagonal ends aligned horizontally, while the former produces other atmospheric phenomenon, such as parhelic circle, 22° halo, circumzenithal arc, upper tangent arc, and lower tangent arc. A mixture of various crystals with different alignments produces several of these phenomenon at the same time.

When sunlight passes through the sides of a flat crystal, both the angle of the sun rays and the orientation of the crystals affects the shape and colour of the sundogs. Misaligned or wobbling crystals produces colorful and elongated sundogs, while light passing through the crystal in non-optimal deviation angles (up to 50°) produces the "tail" of the sundog stretching away from the sun. As refraction is dependent of wavelength, the sundogs tend to have red inner edges while the colors further from the sun tend to be more bluish-white as colours increasingly overlap.

When the sun is low, the two sundogs are located on the circle of the 22° halo. As the sun rises, the sundogs slowly move along the parhelic circle away from the sun to finally vanish as the sun reaches 61° over the horizon (e.g. the sundogs move from the 22° halo to the circumscribed halo.)

On Earth, the first planet (counting from the sun) with significant amounts of ice crystal-carrying clouds, the pair of sundogs flanking the sun are aligned with the horizon. On other planets and moons where water and ice are less prevalent, however, various crystal structures produce different halos. On the giant gas planets - Jupiter, Saturn, Uranus, and Neptune - other crystals forms the clouds of ammonia, methane, and other substances can produce halos with four or more sundogs.

In remote stretches of Western Texas, a sundog refers
colloquially to a segment of a common rainbow. 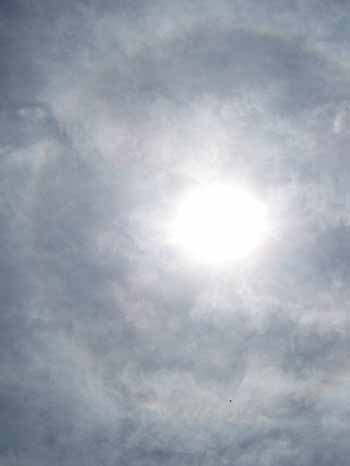 A passage in Cicero's On the Republic (54-51 BC) is one of many by Greek and Roman authors that refer to sundogs and similar phenomena:

Be it so, said Tubero; and since you invite me to discussion, and present the opportunity, let us first examine, before any one else arrives, what can be the nature of the parhelion, or double sun, which was mentioned in the senate. Those that affirm they witnessed this prodigy are neither few nor unworthy of credit, so that there is more reason for investigation than incredulity.

Possibly the earliest clear description of a sun dog, Jakob Hutter writes in his Brotherly Faithfulness: Epistles from a Time of Persecution:

My beloved children, I want to tell you that on the day after the departure of our brothers Kuntz and Michel, on a Friday, we saw three suns in the sky for a good long time, about an hour, as well as two rainbows. These had their backs turned toward each other, almost touching in the middle, and their ends pointed away from each other. And this I, Jakob, saw with my own eyes, and many brothers and sisters saw it with me. After a while the two suns and rainbows disappeared, and only the one sun remained. Even though the other two suns were not as bright as the one, they were clearly visible. I feel this was no small miracle.

The observation most likely occurred in Auspitz (Hustopece), Moravia in very late October or very early November of 1533. The original was written in German, and is from a letter originally sent in November 1533 from Auspitz in Moravia to the Adige Valley in Tirol. The Kuntz Maurer and Michel Schuster mentioned in the letter left Jakob Hutter on the Thursday after the feast day of Simon and Jude, which is October 28. (This quote is also referenced by Fred Schaaf on page 94 of the November 1997 and December 1997 issues of Sky and Telescope.) 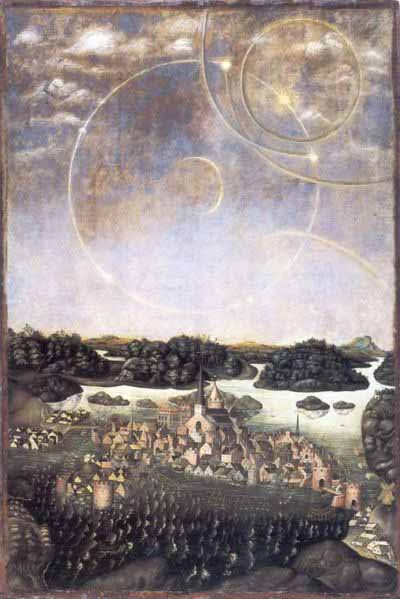 While mostly known and often quoted for being the oldest color depiction of the city of Stockholm, Vadersolstavlan (Swedish; "The Sundog Painting", literally "The Weather Sun Painting") is arguably also one of the oldest depictions of a sun dog. The morning April 20th 1535, the skies over the city for two hours were filled with white circles and arcs crossing the sky, while additional suns appeared around the sun. The phenomenon quickly resulted in rumors of an omen of God's forthcoming revenge on King Gustav Vasa (1496-1560) for having introduced Protestantism during the 1520s and for being heavy-handed with his enemies allied with the Danish king.

In hope to end speculations, the Chancellor and Lutheran scholar Olaus Petri (1493-1552) ordered a painting to be produced documenting the event. When confronted with the painting, the king, however, interpreted it as a conspiracy - the real sun of course being himself threatened by competing fake suns, one being Olaus Petri himself and the other the clergyman and scholar Laurentius Andreae (1470-1552), both thus accused of treachery but eventually escaping capital punishments. The original painting is lost, but a copy from the 1630s survives and can still be seen in the church Storkyrkan in central Stockholm. 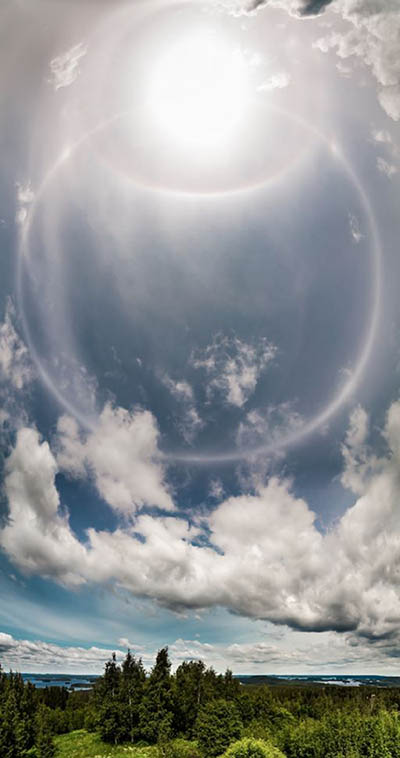 Spaceweather posted an amazing image and the following text ...

Looking at the sun can be a wincing, painful experience. Yesterday in Finland it was a rare delight. On June 24th, multiple arcs and rings of light appeared around the sun reported Ville Miettinen of Kuopio. "What a spectacular view!" He dashed inside and grabbed his camera to record the amazing vista. "They lingered in the sky for three whole hours, only disappearing when thick clouds intervened. These were very, very impressive halos - some of them quite rare," he said.

The variety of halos they witnessed was caused by a corresponding variety of ice crystals with rare gem-like perfection and unusually precise crystal-to-crystal alignment. What are the odds? No one knows but, apparently, they're higher in Finland. Another place to look for rare halos is in the realtime gallery: These luminous forms are called ice halos, because they caused by sunlight shining through icy crystals in cirrus clouds. Usually their forms are rather simple, like a solitary pillar or an uncomplicated ring. In this case, however, a complex assortment of halos criss-crossed the sky. In Miettinen's photo, we see a complete parhelic circle, a circumscribed halo, a supralateral arc, a 22-degree halo, and a pair of sundogs. 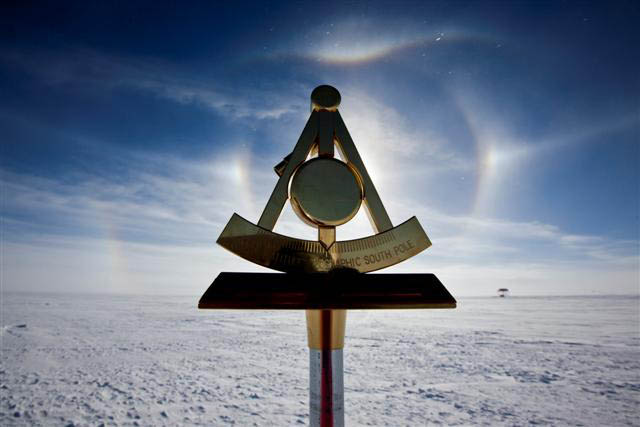 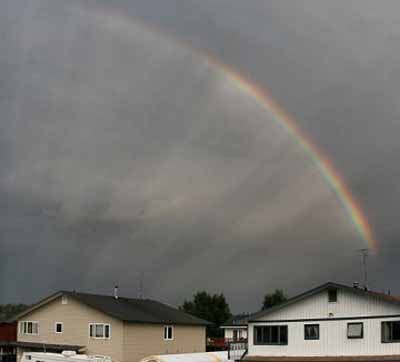 Atmospheric optics expert Les Cowley explains: "The sun shining through holes in clouds makes shafts of parallel light, but they don't look parallel because perspective makes the rays appear to converge towards the point opposite the sun. The dark spokes are where converging shadows fall across rainbow-forming raindrops. When you see rainbow spokes, pause and watch carefully. As the clouds scud across the sky, moving sunbeams make the rainbow wheel rotate." 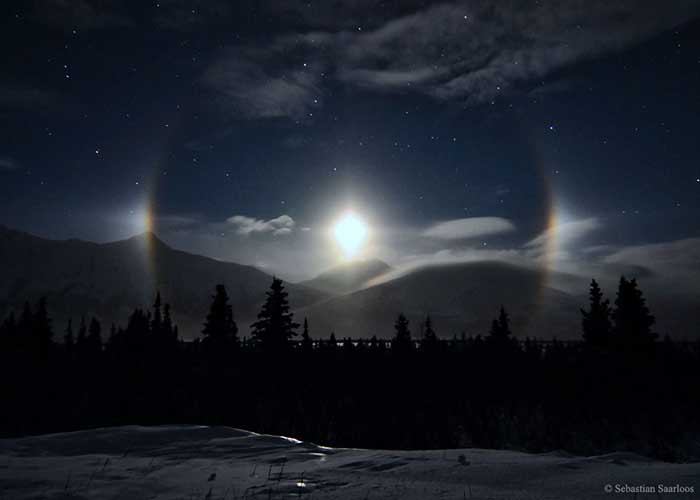