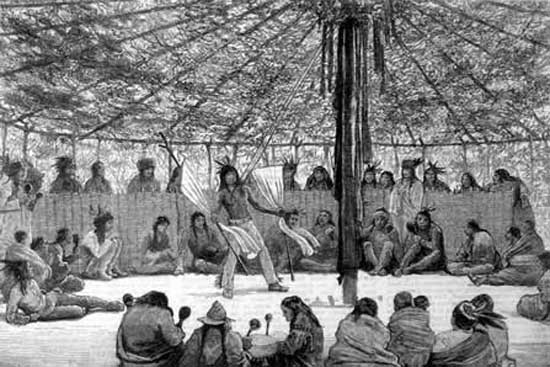 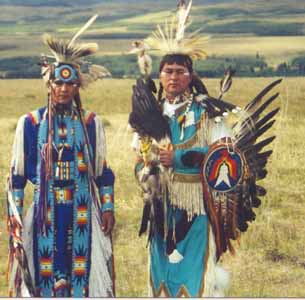 The Sun Dance is a ceremony practiced differently by several North American Indian Nations, but many of the ceremonies have features in common, including dancing, singing and drumming, the experience of visions, fasting, and, in some cases, self-torture.

The Sun Dance was the most spectacular and important religious ceremony of the Plains Indians of 19th-century North America, ordinarily held by each tribe once a year usually at the time of the Summer Solstice.

The Sun Dance last from four to eight days starting at the sunset of the final day of preparation and ending at sunset. It showed a continuity between life and death - a regeneration. It shows that there is no true end to life, but a cycle of symbolic and true deaths and rebirths. All of nature is intertwined and dependent on one another. This gives an equal ground to everything on the Earth.

The Native American tribes who practiced sun dance were:

For many tribes of Plains Indians whose bison-hunting culture flourished during the 18th and 19th centuries, the sun dance was the major communal religious ceremony - the rite celebrates renewal - the spiritual rebirth of participants and their relatives as well as the regeneration of the living Earth with all its components - the ritual, involving sacrifice and supplication to insure harmony between all living beings, continues to be practiced by many contemporary native Americans.

The most renowned priest was also the best Lodge maker. He ran the entire ceremony and would instruct the participant in building a preparatory tepee and give direction to the other tribesmen who would gather the items needed for the construction. Men known for their eminence in their tribe were chosen to look for a tree with a fork in the top. This was to be for the first and center pole of the lodge. When a suitable tree was located a special qualified person was called in to cut the tree down. The fallen tree was then treated just like a fallen enemy. Then, depending on the tribe a bundle was placed on the fork. In the Sioux tribe the bundle contained brush, buffalo hide, long straws with tobacco in them and other religious offerings. 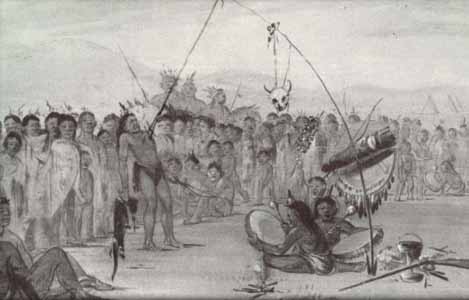 The eldest woman of the camp leads a group of elaborately dressed maidens to the tree to strip off its branches. The next morning, right as the sun is seen over the eastern horizon, armed warriors charge the sun-pole. They attack the tree in effort to symbolically kill it with gunshots and arrows. Once it is dead it is cut down and taken to where the Sun Dance Lodge will be erected. Before raising the sun-pole, a fresh buffalo head with a broad center strip of the back of the hide and tail (is) fastened with strong throngs to the top crotch of the sun-pole. Then the pole is raised and set firmly in the ground, with the buffalo head facing toward the setting-sun." The tree represents the center of the world, connecting the heavens to the earth.

The lodge is then built by the main dancer and his clansmen. The fork of the lodge represents the eagle's nest. The eagle plays a large part in the Sun Dance for it is one of the Plains Indians' most sacred animal. The eagle flies high, being the closest creature to the Sun. Therefore it is the link between man and spirit, being the messenger that delivers prayers to the Wakan-Tanka (god).

In addition to being a messenger, the eagle also represents many human traits. We can see what values and traits these cultures saw as being important in a person by those traits imposed upon such a sacred animal. The eagle is seen as courageous, swift, and strong. He has great foresight and knows everything. "In an eagle there is all the wisdom of the world."

During the Sun Dance the eagle is the facilitator of communication between man and spirit. The Crow may be accompanied by a dancing eagle in his visions, the eagle instructing him about the medicine acquired through the vision. The eagle's feathers can cure illnesses. During the Sun Dance a medicine man may use his eagle feather for healing, first touching the feather to the sun-pole then to the patient, transferring the energy from the pole to the ill people.

It is the buffalo, however, that makes up the main theme of the Sun Dance. In various stories it was the buffalo that began the ritual. The Shoshone believe that the buffalo taught someone the proper way to carry out the dance and the benefits in doing it. Buffalo songs, dances, and feast commonly accompany the Sun Dance.

You can see from the symbolic influences of the buffalo in the Sun Dance how important the animal was to Plains Indians' day-to-day life. It was the buffalo that symbolized life for it was the buffalo that gave them quality of life. Plains Indians relied on buffalo for their food, clothing, shelter, and most all utensils from fly swatters to children's toys. These peoples' lives were intertwined with the buffalo's. And this relationship was praised and blessed with the Sun Dance.

The buffalo was incorporated in many ways in the Sun Dance. The Cheyenne held a principle that all essential sacred items in the sun dance (be) related to the buffalo. The Lakota would place a dried buffalo penis against the sun-pole to give virility to the dancers. This reinforces the symbolic meaning of the ceremony as a celebration of the generative power of the sun.

The sun dance was a significant part of the Crow Indian people's spirituality. It was a spiritual retreat in which a large number of participants would fast, pray and dance for a period of days. They asked for answers to events going on in their lives.

The buffalo skull is used as an alter during the Sun Dance. Offerings are presented to the skull, the Cheyenne stuffing the eye and nose sockets with grass, representing bountiful vegetation for the buffalo, which in turn meant healthy buffalo for the people. For others the grass represents bringing the buffalo back to life for grass is what gives the animal life. The Dakota believe that the bones of bison they have killed will rise again with new flesh. The soul was seen to reside in the bones of people and animals, to reduce a living being to a skeleton is equivalent to re- entering the womb of this primordial life - a mystical rebirth.

During the dance the buffalo also has a great role in the visions. The buffalo may knock down a dancer, or the dancer may challenge the buffalo by charging at it. Passing out for too long means one was too afraid to face the buffalo. One must show courage and stand up to the buffalo before the buffalo finds him worthy to give him what he desires. At a certain point the Crow will notice he is seeing through the buffalo's eyes, that he has become one with the buffalo.

The Sun Dance symbolizes a resolution with the conflict between being a people that view the buffalo as wise and powerful, even closer to the creator than humans, and having to kill and eat them to survive. Making the buffalo sacred, symbolically giving new life to it, and treating it with respect and reverence acts a s a sort of reconciliation. Without the buffalo there would be death, and the Plains Indians saw that the buffalo not only provided them with physical well-being, but kept their souls alive, too.

They also believed that the buffaloes gave themselves to them for food, so the natural course to them would be to offer a part of themselves in return out of gratitude. Thus the sacrifice of the dancers through fasting, thirst, and self-inflicted pain reflects the desire to return something of themselves to nature.

Self-inflicted torture has also come to symbolize rebirth. The torture represents death, then the person is symbolically resurrected. The sun dancer is reborn, mentally and spiritually as well as physically,along with the renewal of the buffalo and the entire universe.

In an effort to curb such practices, the United States government outlawed the Sun Dance in 1904. Among a number of tribes benign forms of the ceremony continued, usually as part of Fourth of July celebrations. There were a few tribes, however, that have attempted to revive the Sun Dance in its original form and meaning.

After the dancers all tear free, or after four days, the Sun Dance ends. The dancers are laid down on beds of sage to continue fasting and to recite their visions to the priest. These visions may hold new songs, new dance steps, or even prophecies of the future. Whatever the outcome, the overall feeling for everyone present is of renewal and balance, the relationships between people and nature once again reaffirmed.

When the camp is ready to leave all sacred items is left in a pile by the sun-pole for they are too sacred to keep for personal use. The Sun Dance Lodge is then left standing for nature to do with it as it wills. Read more