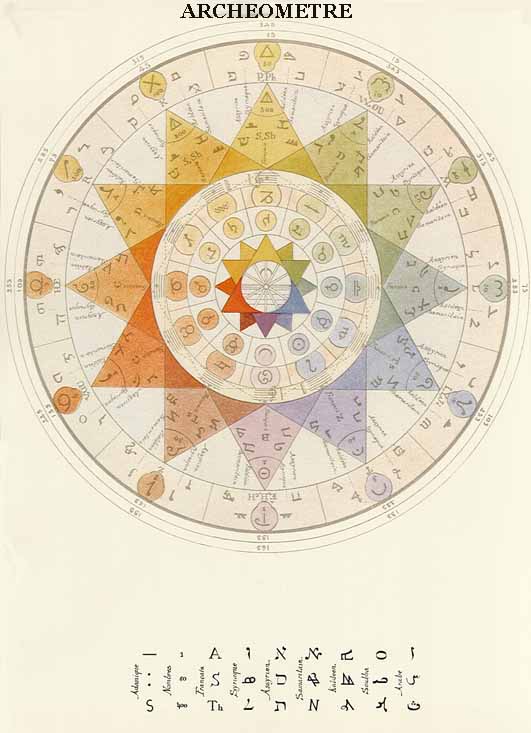 The term "Archeometre" originates from the Greek and means "the measure of the principle". The system refers also to a series of symbols and meanings, which refer to the federal drawer.

'Archeometre' is it the measurement of the 'Archee' (Universal Cosmic Force) of which the Hermetists speaks. Is it a process, a 'key' which makes it possible to penetrate the Mysteries of the Word. It is a measuring instrument of the first (primary) principles of the manifested universe.

Alexandre Saint Yves d'Alveydre's Archeometre shows the original Atlantean alphabet translates into the material the word, form, color, smell, sound and taste, the key to all religions and the sciences of antiquity.

The Archeometre is represented by a circle, which has two scales from 0 to 360 degrees and 360 degrees to 0. It is divided into 12 ranges with 30 degrees each. In the individual ranges are drawn in the tierkreiszeichen, planet, colors, tones and the letters of different alphabets.

The Archeometre is a universal canon (guide), which wants to point the relationship out between the astrological indications, tones, smells, letters and colors. The musician finds therein the color of tones, the writer the toncharakter of letter etc. The Archeometre is to also point practical use out that the religions, arts and architecture a synthesis from different ranges to form. 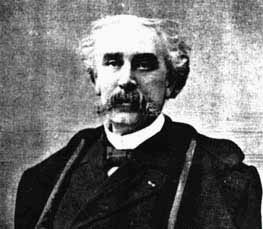 He is buried in the cemetery at Notre Dame.

Alexandre St. Yves d'Alveydre, together with contemporaries like Eliphas Levi, Maitre Philippe, and Fabre d'Olivet, belonged to the most influential spiritual teachers/philosophers of France in the 19th century. Saint-Yves may be looked upon as a 19th century profound thinker, philosopher and mystic.

Being an occultistand alchemist, Saint-Yves believed in the existence of spiritually superior beings. These 'beings' could be contacted telepathically.

Apparently Saint-Yves claimed that he was in touch with these 'superiors' himself, as a matter of fact the principles of Synarchy were partially received telepathically from these Masters who lived in the mysterious underworld realm known as Agartha. Thus d'Alveydre introduced the concept of "Agartha" to the Western world.

The myth of "Agartha" is also known as "Shambhala", as it was known in India, the underworld realm peopled by initiates and lead by 'the Masters", Masters who are the Spiritual leaders of humanity.

Agartha is the great Asian University of the Initiates of the Greater Mysteries. Their 'Mahatma' ('Great Soul') plays the part of the supreme spiritual leader of humanity.

According to Saint-Yves the secret world of "Agartha" and all of its wisdom and wealth "will be accessible for all mankind, when Christianity lives up to the commandments which were once drafted by Moses and Jesus, meaning ' When the Anarchy which exists in our world is replaced by the Synarchy".

Saint-Yves gives a 'lively' description of "Agartha" in this book as if it were a place which really exists, situated in the Himalayas in Tibet. Saint-Yves' version of the history of "Agartha" is based upon ' revealed' information, meaning received by Saint-Yves himself through 'attunement'. However, several French 'reliable' sources state that Saint-Yves was NOT a medium. We've seen that Saint-Yves used a medium, a certain Marie Victoire, when he wrote the "Archeometre". It seems that "the sources" disagree with each other when it comes to Saint-Yves' gifts.

St. Yves d'Alveydre was incredibly influential in the development of 19th century occultism. The concept of Agartha and its Masters had a big influence on the teachings of Blavatsky, founder of the Theosophic Society . Blavatsky also 'promoted' one of Saint-Yves' other concepts, namely the idea of 'root races' ; a 'root race' dominated a long period in history, "destined to be supplanted by the next superior race ". The concept of "root races" can also be found in the writings of Alice A.Bail, Rudolf Steiner and Max Heindel.

Saint-Yves believed the Atlantis was an advanced superior civilization. According to Saint-Yves the Sphinx was built by the Atlanteans, many thousands of years before the rise of Egypt. Saint-Yves placed the downfall of Atlantis at around 12,000 B.C.

Another source of inspiration for Saint-Yves were the medieval Knights Templar, which he regarded as the ultimate Synarchists in history. After all, the Knights Templar exerted control over the political, financial, and religious life of medieval Europe. These three pillars of medieval society corresponded with Saint-Yves' model of Synarchy.

Saint-Yves was influenced by the many neo-Templar societies that were flourishing in his day. He incorporated many of their ideas, in particular from a Masonic-Templar order called "the Rite of Strict Observance", which was founded around 1740-1750 by German Karl von Hund. Saint Yves borrowed the concept of "Unknown Superiors" from Von Hund , however he expanded the concept into "spiritually advanced beings that lived in a remote part of Tibet", aka "Agartha".

In his youth Saint-Yves (who was of French origin) apparently was not easy to handle and because of his "insubordination" he was, at the age of 13, taken under the custody of 2 professors, Frederic-Auguste of Metz and the Abbot Rosseau. Encouraged by his teachers, he started to read Joseph de Maistre and learned about Fabre d'Olivet. The young Alexandre wanted to study literature, but his father decided otherwise; His son should aim for a career in the military.

At a naval-academy in Brest, where he studied medicine (which his professor, Frederic-Auguste of Metz, had advised him to do), he contracts the blackpox (or "black variola") and he leaves for Jersey to recover from the disease. There he met Pelleport and Victor Hugo. It is said that Victor Hugo, a famous French 19th century novelist, was involved with a group of "Rose-Croix" (rosicrucians) of which Maurice Barres (a later member of the "Ordre Kabbalistique de la Rose+Croix" and of the Supreme Council of Papus' Martinist Order) was also a member.

Around this time Saint-Yves d'Alveydre also visited London for the first time.

In 1871 he accepted a post at the Ministry of Home Affairs. It is stated by an unknown biographer that Saint-Yves at his stay on the Isle of Jersey, received from a relative of Fabre d'Olivet several of his manuscripts which apparently made a huge impression on Saint-Yves. The works of Fabre d'Olivet exerted a major influence on the development of Saint-Yves' philosophy.

In 1877 Saint-Yves met Countess Marie de Riznitch-Keller, a relative of Honore de Balzac, novelist and a member of the 'original ' Martinist Order. Saint-Yves married the Countess, a decision which made him financially (in)dependent. He could afford it to spent almost all of his time doing research in libraries in France and abroad. In 1880 Saint-Yves obtains the title of "Marquis", a title which was confered to Saint-Yves by the Vatican. Saint Yves had an excellently connected circle of acquaintances through his marriage with the Countess.

In the year 1885 Saint-Yves was visited by a group of Eastern Initiates, one of them being named prince Hardjij Scharipf. Their mission was to inform Saint-Yves on 'AGARTTHA' , a spiritual and political organization. Their visit lead to his publication, titled "Mission de l'Inde en Europe, mission de l'Europe en Asie. La question des Mahatmas et sa solution". Saint-Yves dedicated this work to the "Sovereign Pontiff who wears the tiara of the seven crowns of modern Brahatmah in the ancient Paradise of the Cycle of the Lamb and the Ram". But Saint-Yves did not publish the book but decided to destroy the work and tore it apart. According to Saint Yves he acted under orders of the Brotherhood.

The wisdom revealed would not be understood and therefore a publication would be like casting pearls before swine. Other sources state that Saint-Yves decided not to "expose the life of a saint" to the outside world, the saint being "Guru Pandit", the Eastern initiate who'd visited Saint-Yves. Apparently Saint-Yves overlooked one copy of the manuscript which fell into the hands of Count Alexander Keller, son of Countess Marie de Riznitch-Keller.

This copy of Saint-Yves "Mission de l'Inde en EuropeŠ" was published (posthumous) in a limited edition in 1910 by the publishing firm of Dorbon-Aone. During the Second World War the Gestapo seized all the publications of this book that were known to exist. According to Dr.Philippe Encausse, Papus' son, the original copy belonging to Count Keller was given to Papus. After the death of Papus in 1916 it was donated to the Library of Sorbonne.

After his wife's death in 1895, Saint-Yves started to work on his last work, an enormous work called the "Archeometre", a book published in 1903. The "Archeometre" 'intended to be a comprehensive key permitting a survey of ancient culture'. The book 'explores' the value of various philosophical, scientific, occult and religious systems 'and its place in the universal tree of science or tradition'. "Archeometre" is derived from the Greek meaning roughly "the mass of the principle". Saint-Yves' system is build around a series of symbols and interpretations relating to the "Ark of the Covenant". It's a very complex system which intends to be the key to all Religions and Sciences of the Ancients. 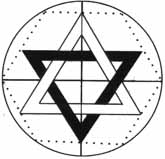 Seal of the Martinist Order

Saint-Yves d'Alveydre had many followers within the Martinist Order. Saint Yves' ideas have become part of subsequent occult "beliefs", mainly because they were also taken up and popularized by one of the most influential occultists of modern times, Helena Blavatsky (1831-1891), founder of the "Theosophic Society".

Blavatsky's work had an enormous impact on various esoteric organizations, mainly those which were established in the beginning of the 20th century. For instance, many of Blavatsky's concepts were incorporated into the teachings of Alice Baily (1880-1949), and it is generally known that Baily's teachings have had a huge influence over the beliefs of the New Age movement of today.

Then there is Rudolf Steiner (1861-1925) who used Synarchy as a major influence when he developed his own ideas for his own organization, the "Antroposofische Gesellschaft" (established in 1913, Steiner developed a philosophy which is known as "Antrosophy").

Steiner was a former member (and high dignitary) of the "Theosophic Society" in Germany. One of Steiner's former disciples, Max Heindel (1865-1919), founded the "Rosicrucian Fellowship" in 1908. All these organizations, and I just named a few of them, propagated several of the ideas which were "introduced" by Saint-Yves in a way.

The principle of "Masters" is a well known concept within many of the esoteric organizations. The original concept did not descend from Saint-Yves, but he was probably one of the first in the West who introduced the idea of the hidden realms of these Masters, Adepts and Initiates which were situated in the East.