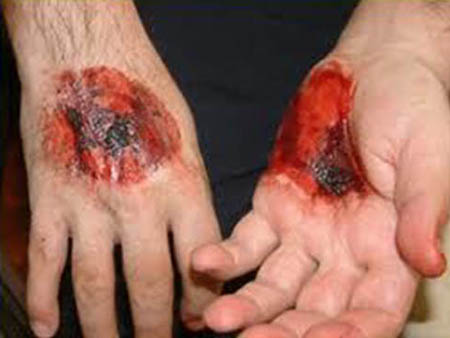 Stigmata is spontaneous manifestation of bloody wounds on a person's hands, feet, forehead and back - similar to the wounds of the crucified Jesus. Those who describe stigmata categorize these experiences as divine or mystical. History tells us that many ecstatic bear on hands, feet, side, or brow the marks of the Passion of Christ with corresponding and intense sufferings. These are called visible stigmata. Others only have the sufferings, without any outward marks, and these phenomena are called invisible stigmata. The infliction of stigmata is called stigmatization.

Healing is usually reported within a few hours after the wounds appear. Some people who suffer from stigmata report feels of sadness, depression, weakness, their body in physical pain, prior to the bleeding. The blood will pour forth from openings on the body for an unknown amount of time -then just as suddenly disappear and heal. The openings can be just in one area of the body - such as the hands or feet - or in several areas of the body at the same time. The person is almost always in pain and discomfort when this occurs.

There have been over 500 reported stigmatics who have displayed wounds similar to those inflicted upon Jesus. The first recorded case of these wounds was in the year 1222, by a man named Stephen Langton of England. Saint Francis of Assisi first suffered the wounds in La Verna, Italy, in 1224.

Other famous stigmatists include Saint Catherine of Siena, Saint John of God, and Saint Marie of the Incarnation. The most famous stigmatist of the twentieth century was Saint Pio of Pietrelcina (1887-1968).

Stigmata was more recently experienced by Brother Roque (1968-1996); a novice in the order of Los Hijos de Los Hijos de La Madre de Dios (The Sons of the Sons of the Mother of God in Villavicencio, Colombia; and Canadian Lilian Bernas who began claiming to exhibit stigmata in 1992.

There have been historical stigmatics that were known to have faked wounds, such as Magdalena de la Cruz (1487-1560), who admitted the fraud.Similarly self-inflicted wounds can be associated with certain brain disorders. Some people who fake stigmata suffer from Munchausen syndrome which is characterised by an intense desire for attention. People with Munchausen hurt themselves or fake an illness hoping to end up in a hospital where they can enjoy attention and care.

People also fake stigmata knowing that some who had stigmata were declared holy by the Pope. In this way they try to gain recognition. Self-inflicted stigmata heal naturally.

Though some people feel stigmata is psychosomatically induced, this is rarely the case. Stigmata can affect women as well as men. The blood may be of a different type than the person who is having the experience.

Classically, Stigmata appear at as many as five locations of the Holy Wounds, namely the hands or wrists, feet, and side (often fatal), and other wounds endured during the Passion, including:

Wounds caused by a Crown of Thorns, although sometimes invisible

Whip lashings or scourging on the back

A wound in the side, caused by a spear, or lanceNail holes in the wrists, or hands

Nail holes in the ankles, or feet

Formations of the flesh in the form of nails: the heads of the nail being rectangular and an inch on the topside and the tip of a nail on the backside, usually curved in as if hitting another surface.

Supposedly, a real stigmatic exhibits the wounds in a five-part series. Each series is separated by a length of time, only to repeat again like so: A; A,B; A,B,C; A,B,C,D; A,B,C,D,E. At the end of each sequence the stigmatic is sometimes known to smell a specific type of flower; see also odor of sanctity.

Also, according to experts, the blood seeping from the wounds of the individual should be the blood of Christ, thus yielding two types of blood from one wound.

There is debate over the historical method crucifixion, if nails were driven through the hands or wrists. Stigmata appear on the hands of some stigmatists, and the wrists of others. Skeptics see this as evidence that the wounds have a human origin rather than a divine one, as divine wounds might be expected to be more consistent. The odor has a smell of jasmine.

In supposed real Stigmata, the blood flows freely and cannot be stopped with traditional medical care. Faked Stigmata are superficial and heal quickly. Blood will appear fresh and of a bright, deep color. The blood flow will often go against the laws of gravity. The stigmata are usually received with states of extreme ecstasy.

In his paper on "Hospitality and Pain", iconoclastic Christian theologian Ivan Illich touches on the phenomenon of stigmata with characteristic terseness: "Compassion with Christ... is faith so strong and so deeply incarnate that it leads to the individual embodiment of the contemplated pain". His thesis is that stigmata result from exceptional poignancy of religious faith and desire to associate oneself with the suffering Christ.

The stigmata theme has been used in several movies, TV shows, and books.

Blessed Margaret Mary Alacoque (1647-90), Visitandine (who had only the crown of thorns);


Of these, Marie de Moerl spent her life at Kaltern, Tyrol (1812-68). At the age of twenty she became an ecstatic, and ecstasy was her habitual condition for the remaining thirty-five years of her life. She emerged from it only at the command, sometimes only mental, of the Franciscan who was her director, and to attend to the affairs of her house, which sheltered a large family. Her ordinary attitude was kneeling on her bed with hands crossed on her breast, and an expression of countenance which deeply impressed spectators. At twenty-two she received the stigmata. On Thursday evening and Friday these stigmata shed very clear blood, drop by drop, becoming dry on the other days. Thousands of persons saw Marie de Moerl, among them Gorres (who describes his visit in his "Mystik", II, xx), Wiseman, and Lord Shrewsbury, who wrote a defense of the ecstatic in his letters published by "The Morning Herald" and "The Tablet".

Louise Lateau spent her life in the village of Bois d'Haine, Belgium (1850-83). The graces she received were disputed even by some Catholics, who as a general thing relied on incomplete or erroneous information, as has been established by Canon Thiery ("Examen de ce qui concerne Bois d'Haine", Louvain, 1907). At sixteen she devoted herself to nursing the cholera victims of her parish, who were abandoned by most of the inhabitants. Within a month she nursed ten, buried them, and in more than one instance bore them to the cemetery. At eighteen she became an ecstatic and stigmatic, which did not prevent her supporting her family by working as a seamstress. Numerous physicians witnessed her painful Friday ecstasies and established the fact that for twelve years she took no nourishment save weekly communion. For drink she was satisfied with three or four glasses of water a week. She never slept, but passed her nights in contemplation and prayer, kneeling at the foot of her bed. Stigmata Wikipedia 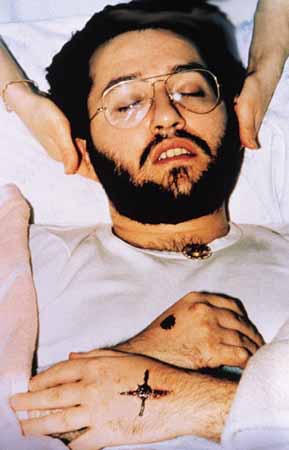 In June 1996, I met Georgio Bongiavani a man who experiences stigmata on his hands and forehead every day of his life. I was at the Star Knowledge conference, in South Dakota. As I am a sensitive and healer I was guided to place my hands gently into his. I experienced an incredible flow of healing energy. Georgio's wounds appear legitimate. He lectured about the return of extraterrestrials which links to biblical prophecies and Revelation.