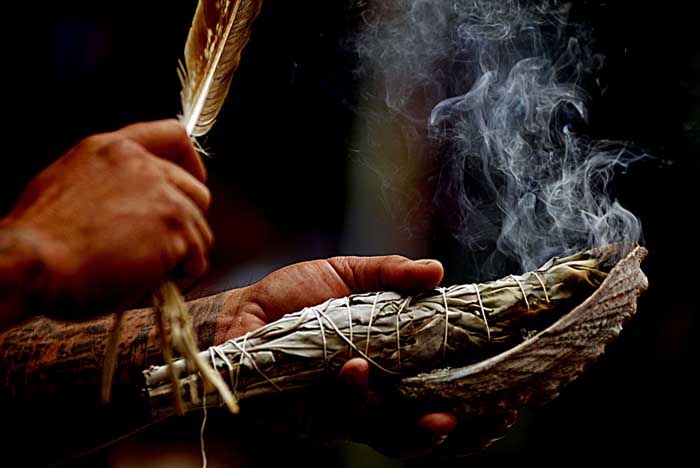 Smudging is the burning of certain herbs to create a cleansing smoke bath, which is used to purify people, ceremonial and ritual space, and ceremonial tools and objects.There are different ceremonies and rituals that can be done.

The burning of herbs or incense is a practice held sacred by many indigenous cultures. It is a ritual for cleansing, purifying and protecting the physical and spiritual bodies. The effect of the smoke is to banish negative energies.

Many differing cultures and peoples have their own methods and herbal mixtures for this purpose. Smudging, done correctly, can bring physical, spiritual and emotional balance.

The term Smudging originated in the Native American culture. Native American Indians use a variety of smudging mixtures. In olden times, the end of the smudge stick or braid was lit from the central or cooking fire.

Not everyone views the practice of smudging in the same way and different herbs may be used for different purposes. 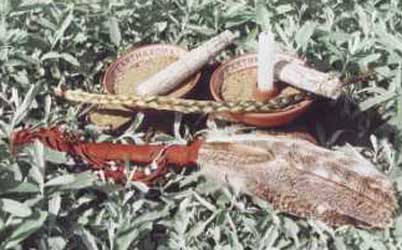 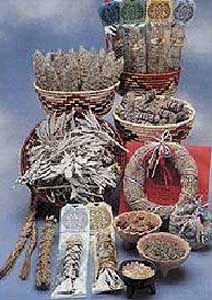 The principle herbs used are sage, cedar or juniper, lavender and sweet grass.

Generally, sage, sweet grass, and cedar are burned to purify and protect one's living area, self and sacred tools.

Pure tobacco is also used by some Plains tribes, and copal in South and Central America.

The herbs are burnt on their own or in mixtures, depending on tradition and required effect.

Sage (Artemisia tridentia) is not the same as the European varieties and is indigenous to the Americas.

There are two major genera and several varieties of each genus of Sage that are used for smudging. Salvia, or the herb sage used for cooking, comes in two major varieties: S. officinalis, commonly known as Garden Sage, and S. apiana, commonly known as White Sage. Salvia varieties have long been acknowledged as healing herbs, reflected in the fact that its genus name comes from the Latin root word salvare, which is the verb "to heal" or "to save." Artemisia is the genus commonly considered "Sagebrush", and is more common in California.

There are two major varieties to the Artemisia genus: A. californica or Common Sagebrush, and A. vulgaris or Mugwort. There are many other varieties of both Salvia and Artemisia, and all are effective in smudging. Sage is burned in smudging ceremonies to drive out evil spirits, negative thoughts and feelings, and to keep Gan'n (negative entities) away from areas where ceremonials take place. In the Plains Sweatlodge, the floor of the structure is strewn with sage leaves for the participants to rub on their bodies during the sweat.

Sage is also used in keeping sacred objects like pipes or Peyote wands safe from negative influence. In the Sioux nation, the Sacred Pipe is kept in a bundle with sage boughs. I would think special crystals could be so protected this way as well.

True cedar is of the Thuja and Libocedrus genera. Some Junipers (Juniperus genus) are also called "cedar", thus complicating things some. Some Juniper varieties are cleansing herbs, especially J. monosperma, or Desert White Cedar. But for smudging, the best is Western Red Cedar (Thuja occidentalis) and California Incense Cedar (Libocedrus descurrens). Cedar is burnt while praying to the Great Spirit (Usen', the Source -- also known to Plains nations as Wakan Tanka) in meditation, and also to bless a house before moving in as is the tradition in the Northwest and Western Canada. It works both as a purifier and as a way to attract good energy in your direction. It is usually available in herb stores in chipped form, which must be sprinkled over a charcoal in a brazier. I like a piece of charcoaled mesquite for this purpose, rather than the commercial charcoal cake.

Very important to the Sioux and Cherokee nations, its botanical name is Hierochloe odorata. In these tribes, the sweetgrass is braided like hair braids. It could be burnt by lighting the end of it, or (more economically) by shaving little bits of it onto charcoal in a brazier. Again, use charcoaled Mesquite (I believe it comes packaged for barbecue use under the brand name "Red Arrow") to burn it, not pressed charcoal tablets. Sweetgrass is burnt after smudging with sage, to welcome in good influences after the bad had been driven out. Sweetgrass is not common today.

Bay leaf is traditionally used to protect against colds and flu.

Fennel is effective in repelling negative energies and calms the nerves.

Mugwort is used for healing, divination and to stimulate dreams and visions. It can be burned during rituals or before sleeping. However as some people find it to be slightly mind-altering, avoid its use before driving.

Mullien is an effective herb for healing emotional trauma that originates from relationships with other people and it provides protection when beginning a new project. Most people find the smoke to be very grounding and calming. It is often used at the end of a ritual in which Mugwort has been burned at the beginning.

Copal is sometimes used by the Yaqui and in ancient times by the Aztec and the Maya.

Pine, Fir, Hemlock, and Spruce are burnt for their purifying and cleansing effect. They are most effective in combination with other herbs.

Uvi Ursi was traditionally mixed with tobacco and used for smoking during peace pipe ceremonies. The fragrance and energy when burned are very calming and grounding.

Yerba Santa has many uses medicinally. Burn it to nurture and protect that which is ancient, sacred and wild within yourself. Use it when you need encouragement or courage. 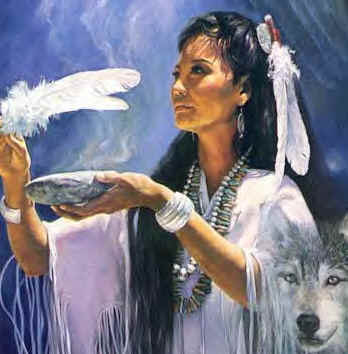 Smudging may be done by yourself or with one or more other people.

There are many different rituals and methods used when smudging.

One or more herbs used in different combinations or alone.

Rooms and psychic tools, such as crystals and other objects that hold energy, are often smudged/cleansed on a regular basis.

The initial smudging is for the purpose of purifying the space and participants and for banishing any unwanted energies.

Cleansing the ceremonial or ritual space before and after the event is an essential part of spiritual hygiene.

The final smudge is to cleans any negative vibrations and energies attracted or created during the proceedings.

It is also a good thing to do on a regular basis for both one's self and one's living space, to maintain individual and domestic harmony.

Smudging itself takes many forms.

Sometimes herbs are tied in a bundle called a 'smudge stick' and allowed to dry.

Some herbs lend themselves to braiding.

In olden times, the end of the smudge stick or braid was lit from the central or cooking fire.

Today a candle is recommended as it takes some time to get the stick smoking.

Loose dried herbs may also be placed directly onto the burning wood in an indoor fireplace or crumbled between the fingers over a piece of charcoal. The container used for the charcoal and herbs needs to be fireproof.

Ceramic or glass bowls with a layer of sand or salt work well.

Especially nice is an abalone shell with a layer of colored sand in the bottom.

Remember that the container may be come warm enough to scorch a surface or burn your hand.


The idea behind burning herbs is to release their energy and fragrance, not to fill the room or your lungs with smoke.

Make sure the bowl/vessel you use can support the heat that will be produced so it will not crack.

Burning excessive amounts can lead to respiratory distress or problems.

Avoid smudging in the room when infants, pregnant persons, asthmatic or allergy-prone people are present.

When burning a smudge stick or braid, they will eventually go out on their own, but should you need to put them out quickly, you can tamp the end out in sand or soil, shaking off the excess. Using water is messy and not generally recommended.

Remember that all things are created from some form of electromagnetic energy/ aura and can merge to bring balance or imbalance.

The aura and souls of the plants/herbs and people can merge to this end when smudging.

Smudging is often used by healers. During the healing the smoke may be fanned over the person by the healer either using their hand, feathers or a fan.

This clears out unhealthy energies and brings in the special attributes of the herbs. There are various invocations, chants, and prayers used during the healing.

Part of the spiritual work of the plant is to work with human spirits.

When you have the intention to be partners, it enables them to work actively with you and much more of their magic manifests in their lives.