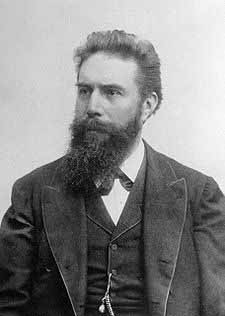 Rontgen, Wilhelm Conrad - (March 27, 1845 - Feb. 10, 1923) was a German physicist who was a recipient of the first Nobel Prize for Physics, in 1901, for his discovery of X rays, which heralded the age of modern physics and revolutionized diagnostic medicine.

Rontgen studied at the Polytechnic in Zźrich and then was professor of physics at the universities of Strasbourg (1876-79), Giessen (1879-88), Wurzburg (1888-1900), and Munich (1900-20). His research also included work on elasticity, capillary action of fluids, specific heats of gases, conduction of heat in crystals, absorption of heat by gases, and piezoelectricity.

In 1895, while experimenting with electric current flow in a partially evacuated glass tube (cathode-ray tube), Ršntgen observed that a nearby piece of barium platinocyanide gave off light when the tube was in operation.

He theorized that when the cathode rays (electrons) struck the glass wall of the tube, some unknown radiation was formed that traveled across the room, struck the chemical, and caused the fluorescence.

Further investigation revealed that paper, wood, and aluminum, among other materials, are transparent to this new form of radiation. He found that it affected photographic plates, and, since it did not noticeably exhibit any properties of light, such as reflection or refraction, he mistakenly thought the rays were unrelated to light.

In view of its uncertain nature, he called the phenomenon X-radiation, though it also became known as Rontgen radiation.

He took the first X-ray photographs, of the interiors of metal objects and of the bones in his wife's hand. Read more ...