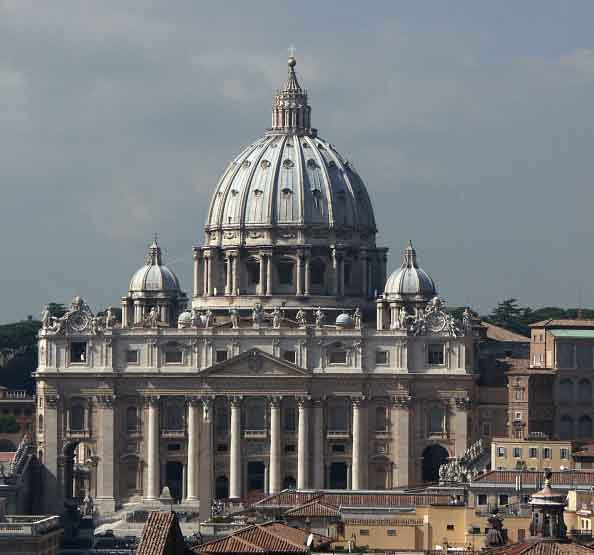 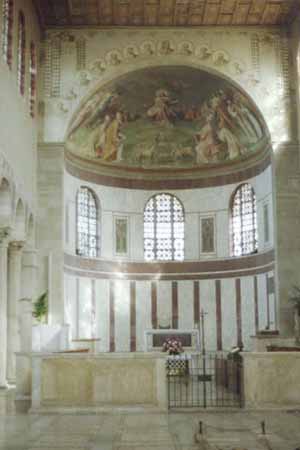 The Latin word basilica was originally used to describe a Roman public building (as in Greece, mainly a tribunal), usually located in the forum of a Roman town. In Hellenistic cities, public basilicas appeared in the 2nd century BC. After the Roman Empire became officially Christian, the term came by extension to refer to a large and important church that has been given special ceremonial rites by the Pope. Thus the word retains two senses today, one architectural and the other ecclesiastical.

In architecture, the Roman basilica was a large roofed hall erected for transacting business and disposing of legal matters. Such buildings usually contained interior colonnades that divided the space, giving aisles or arcaded spaces at one or both sides, with an apse at one end (or less often at each end), where the magistrates sat, often on a slightly raised dais. The central aisle tended to be wide and was higher than the flanking aisles, so that light could penetrate through the clerestory windows. One can determine a basilica apart from other structures by its dome. The oldest known basilica, the Basilica Porcia, was built in Rome in 184 BC by Cato the Elder during the time he was censor. Other early examples include the one at Pompeii (late 2nd century BC).

Probably the most splendid Roman basilica is the one constructed for traditional purposes during the reign of the pagan emperor Maxentius and finished by Constantine after 313. As early as the time of Augustus, a public basilica for transacting business had been part of any settlement that considered itself a city, used like the late medieval covered markethouses of northern Europe (where the meeting room, for lack of urban space, was set above the arcades). 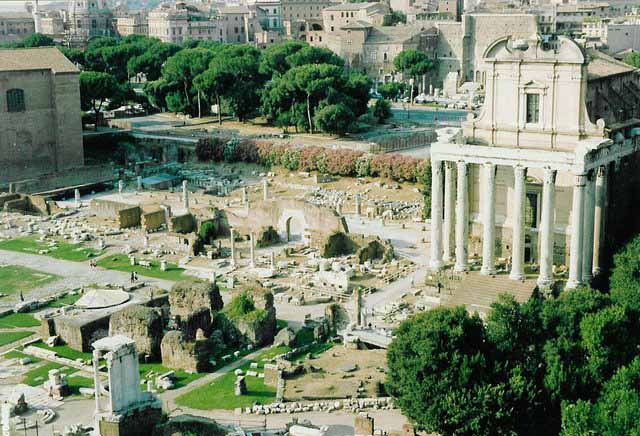 The Basilica Aemilia was a civil basilica in the Roman forum, in Rome, Italy. Today only the plan and some rebuilt elements can be seen. The Basilica was 100 meters (328 ft) long and about 30 meters (98 ft) wide. Along the sides were two orders of 16 arches, and it was accessed through one of three entrances.

The new basilica was built on a site where once 5th century BC) were the tabernae lanienae ("butcher shops") and later (4th century BC) the tabernae argentariae, which housed the city's bankers and after a fire were renamed tabernae novae ("new shops"). The square had two facing rows of shops. A first basilica had been built behind the tabernae argentariae between 210 BC and 195-191 BC, date in which it is mentioned by Plautus. Archaeological studies have shown that this building comprised three naves paved with tufa from Monteverde, the back faŤade having a portico which opened to the Forum Piscatorium and the Macellum (the area later occupied by the Forum of Nerva).

It was erected in 179 BC by censor Marcus Fulvius Nobilior with the name of Basilica Fulvia. After the latter's death, his colleague Marcus Aemilius Lepidus completed it, and it was frequently restored and redecorated by the members of the Aemilian gens, giving the basilica its current name. The 78 BC consul, homonymous of the preceding one, embellished it with the clipei ("shields"). This intervention is recalled in a coin from 61 BC by his son, Marcus Aemilius Lepidus. According to other scholars, however, the Basilica Aemilia formed a different edifice from the Basilica Fulvia.

A new edifice in substitution of the Basilica Fulvia was begun in 55 BC by Lucius Aemilius Paulus Lepidus, and inaugurated by his son in 34 BC. This edifice had similar lines to the preceding one; however with a reduced length and a second nave in lieu of the back portico.

The columns in the central nave, in African marble, had Corinthian capitals and friezes with deeds from the history of Republican Rome. The columns in the second row were in cipolline marble and, finally, the external ones had Ionic capitals.

After a fire, Augustus in 14 BC heavily restored the edifice. In this occasion the tabernae which preceded it towards the Forum square and the portico were totally rebuilt. The latter was dedicated to the emperor's two grandsons (Porticus Gai et Luci): it had two orders of arcades with pilasters and Doric semi-columns. The two upper floors of the basilica (which, according to some scholars, were still unfinished at the time) were totally rebuilt. Over the upper order an attic was built, decorated with vegetable elements and statues of barbarians.

The basilica was restored again in AD 22. On its two-hundredth anniversary, the Basilica Aemilia was considered by Pliny to be one of the most beautiful buildings in Rome. It was a place for business and, in the porticus of Gaius and Lucius (the grandsons of Augustus) fronting the Roman Forum, there were the Tabernae Novae (New Shops). On the colored marble floor one still can see the green stains of bronze coins that melted when Rome was sacked by Alaric the Visigoth in 410 AD.

Conspicuous remains of the basilica could still be seen in the Renaissance: they were however used for the Giraud-Torlonia Palace (also no longer existing). Inside, there are several tabernae. The main hall or court is behind the shops. 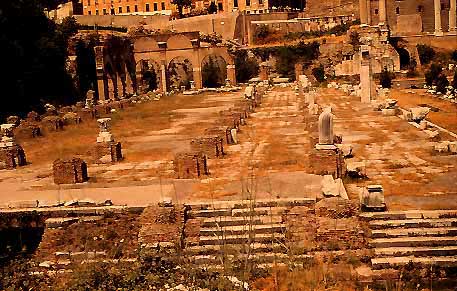 The Basilica Julia, was a large, ornate, public building used for meetings and other official business during the early Roman Empire. The building was initially dedicated in 46 BC by Julius Caesar, with building costs paid from the spoils of the Gallic War. The Basilica was completed by Augustus, who named the building after his adoptive father. The building burned shortly after its completion, but was repaired and rededicated in AD 12. The Basilica was again reconstructed by the Emperor Diocletian after the fire of AD 283.

The Basilica housed the civil law courts and tabernae (shops), and provided space for government offices and banking. In the first century, it also was used for sessions of the Centumviri (Court of the Hundred), who presided over matters of inheritance. In his Epistles, Pliny the Younger describes the scene as he pleaded for a woman whose 80-year-old husband had disinherited her within days of taking a new wife.

It was the favorite meeting place of the Roman people. This Basilica houses public meeting places and shops, but it is used mainly as a law court. On the pavement of the portico, there are diagrams of games scratched into the white marble. 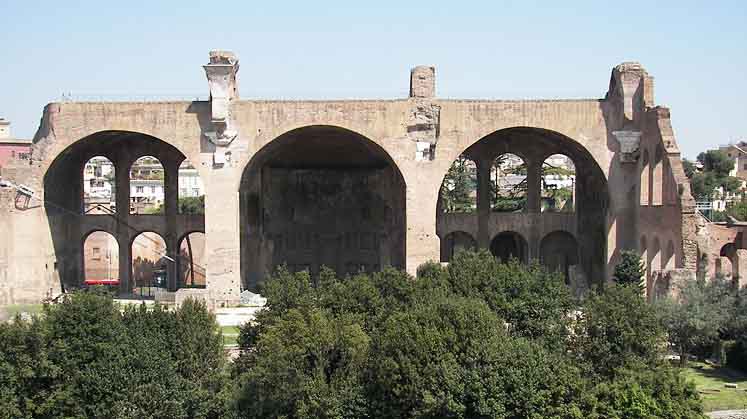 The Basilica of Maxentius and Constantine (sometimes known as the Basilica Nova 'new basilica' or Basilica Maxentius) was the largest building in the Roman Forum. Construction began on the northern side of the forum under the emperor Maxentius in 308, and was completed in 312 by Constantine I after his defeat of Maxentius at the Battle of the Milvian Bridge.

The building consisted of a central nave covered by three groin vaults suspended 39 meters above the floor on four large piers, ending in an apse at the western end containing a colossal statue of Constantine (remnants of which are now in a courtyard of the Palazzo dei Conservatori of the Musei Capitolini). The lateral forces of the groin vaults were held by flanking aisles measuring 23 by 17 metres (75 x 56 feet). The aisles were spanned by three semi-circular cross vaults perpendicular to the nave, and narrow arcades ran parallel to the nave beneath the cross-vaults. The nave itself measured 25 metres by 80 metres (83 x 265 feet) creating a 4000 square meter floor. Like the great imperial baths, the basilica made use of vast interior space with its emotional effect.

All that remains of the basilica is the north aisle with its three concrete cross vaults. The ceilings of the the cross vaults show advanced weight-saving structural skill with octagonal ceiling coffers.

In modern usage, a basilica has come to be defined as a place of worship; during ancient Rome, it was a combination of a court-house, council chamber and meeting hall. There were, however, numerous statues of the gods displayed in niches set into the walls. The wrestling events were held here during the 1960 Summer Olympic Games.

On the outside wall of the basilica, facing onto the via dei Fori Imperiali, are contemporary maps showing the various stages of the rise of the Roman Empire.

The Basilica Maxentius is a marvel of engineering work at the time of the Roman Empire. At the time when it was built it was the largest structure to be built and thus is a unique structure taking both aspects from Roman baths as well as typical Roman basilicas. At the time it used the most advanced engineering techniques which we known, including innovations taken from the Markets of Trajan and the Baths of Diocletian.

Similar to many basilicas at the time such as the Basilica Ulpia, the Basilica Maxentius featured a huge open space in the central nave, but unlike other basilicas instead of having columns support the ceiling the entire building was built using arches, a much more common appearance in Roman baths than basilicas. Another difference from traditional basilicas is the roof of the structure. While traditional basilicas were built with a flat roof, the Basilica Maxentius was built with a folded roof, decreasing the overall weight of the structure and decreasing the horizontal forces exerted on the outer arches.

Christian legend: A anachronistic medieval Christian legend, recorded in the Golden Legend and elsewhere, had it that the basilica, which supposedly contained a statue of Romulus, fell down on the night of Christ's birth. This was one element feeding the depiction of the stable of the Nativity of Jesus as a ruined temple from the late Middle Ages on. From the sixteenth century many artists used the actual ruins as a loose base for their depictions.