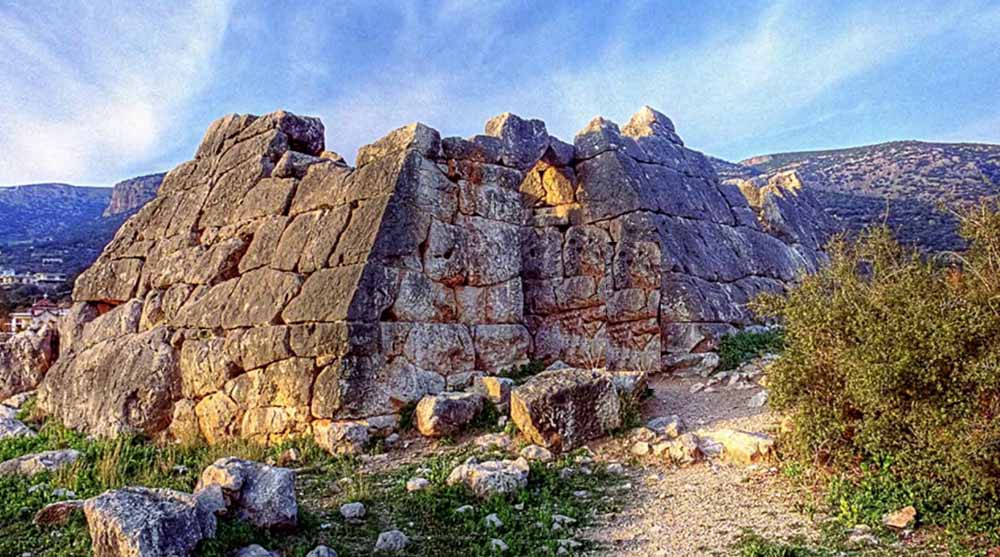 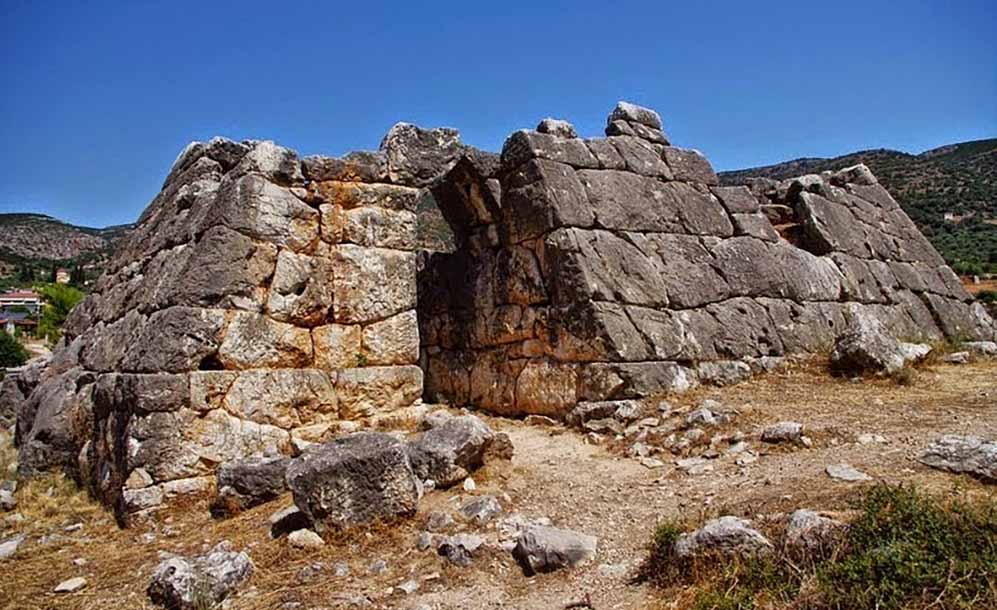 Pausanias (2nd century AD) mentions two buildings resembling pyramids, one, 19 kilometres (12 mi) southwest of the still standing structure at Hellenikon, a common tomb for soldiers who died in a legendary struggle for the throne of Argos and another which he was told was the tomb of Argives killed in a battle around 669/8 BC. Neither of these still survive and there is no evidence that they resembled Egyptian pyramids.

There are also at least two surviving pyramid-like structures still available to study, one at Hellenikon and the other at Ligourio/Ligurio, a village near the ancient theatre Epidaurus. These buildings were not constructed in the same manner as the pyramids in Egypt. They do have inwardly sloping walls but other than those there is no obvious resemblance to Egyptian pyramids. They had large central rooms (unlike Egyptian pyramids) and the Hellenikon structure is rectangular rather than square, 12.5 by 14 metres (41 by 46 ft) which means that the sides could not have met at a point. The stone used to build these structures was limestone quarried locally and was cut to fit, not into freestanding blocks like the Great Pyramid of Giza.

The dating of these structures has been made from the pot shards excavated from the floor and on the grounds. The latest dates available from scientific dating have been estimated around the 5th and 4th centuries. Normally this technique is used for dating pottery, but here researchers have used it to try to date stone flakes from the walls of the structures. This has created some debate about whether or not these structures are actually older than Egypt, which is part of the Black Athena controversy.

Mary Lefkowitz has criticized this research. She suggests that some of the research was done not to determine the reliability of the dating method, as was suggested, but to back up an assumption of age and to make certain points about pyramids and Greek civilization. She notes that not only are the results not very precise, but that other structures mentioned in the research are not in fact pyramids, e.g. a tomb alleged to be the tomb of Amphion and Zethus near Thebes, a structure at Stylidha (Thessaly) which is just a long wall, etc. She also notes the possibility that the stones that were dated might have been recycled from earlier constructions. She also notes that earlier research from the 1930s, confirmed in the 1980s by Fracchia was ignored. She argues that they undertook their research using a novel and previously untested methodology in order to confirm a predetermined theory about the age of these structures.

Liritzis responded in a journal article published in 2011, stating that Lefkowitz failed to understand and misinterpreted the methodology.