The term Chinese pyramids refers to pyramidal shaped structures in China, most of which are ancient mausoleums and burial mounds built to house the remains of several early emperors of China and their imperial relatives. About 38 of them are located around 25 kilometres (16 mi) - 35 kilometres (22 mi) north-west of Xi'an, on the Qin Chuan Plains in Shaanxi Province. The most famous is the Mausoleum of the First Qin Emperor, northeast of Xi'an and 1.7 km west of where the Terracotta Warriors were found. Although known in the West for at least a century, their existence has been made controversial by sensationalist publicity and the problems of Chinese archaeology in early 20th century. Read more 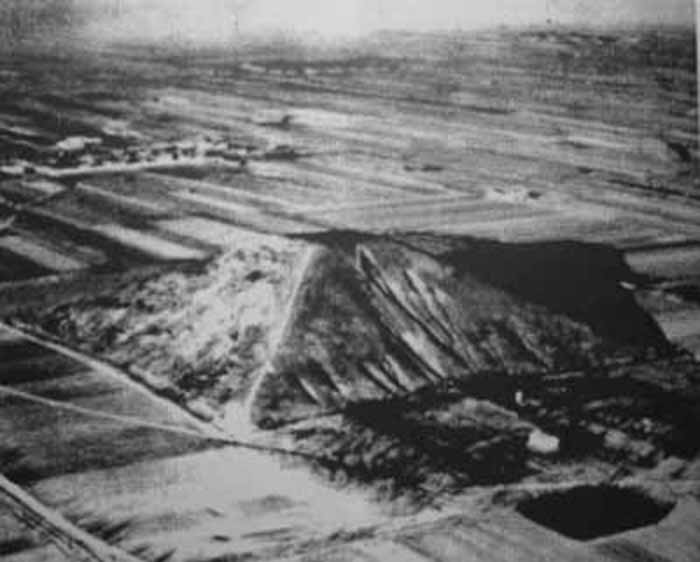 The pyramids of China are approximately 100 ancient mounds, many of which were used for burial. Most of them are located within 100 kilometers of the city of Xi'an, on the Qin Chuan Plains in the Shaanxi Province, central China.

The existence of pyramids in China has come in two stages. Most early stories were focused on the existence of "Great White Pyramid." A photograph of this pyramid in the Qinling mountains was taken by Americans in 1945, but remained in military files for 45 years. US Air Force pilot James Gaussman is said to have seen a white jewel-topped pyramid during a flight between India and China during World War II, but there is scant evidence for a source on this story.

However, it is now believed that the Gaussman story was actually based on Colonel Maurice Sheahan, Far Eastern director of Trans World Airlines, who told an eyewitness account of his encounter with a pyramid in the March 28, 1947 edition of The New York Times. A photo of Sheahan's pyramid appeared in The New York Sunday News on March 30, 1947. It is this photograph that later became attributed to James Gaussman.

It is now known, thanks to efforts of Chris Maier, that the particular pyramid shown in the photo is the Maoling Mausoleum. This pyramid sits just outside of Xi'an. In 1994, German tour operator and author Hartwig Hausdorf was noted for photographing and studying several pyramids.

He drew attention to the structures' existence with his 1994 book Die Weisse Pyramide, the subject of an article in Nexus Magazine in 1995 by Philip Coppens, later translated into English under the revised title The Chinese Roswell (1998).

The pyramids of Xi'an can now be visited on trips from Xi'an and no longer are located in "forbidden zones". Several pyramids have small museums attached to them.

The Great White Pyramid itself (rather than the photograph), as described by Sheahan, remains unidentified.

The Burma Tibetian Pyramid is called 'The Pyramid of Gathering'. It is allegedly a bright white pyramid that is well preserved in the Buhtan Province. The limestone is still preserved beyond imagination. It supposedly glows under light. This pyramid was spotted by U.S. pilots in China in WWll flying over the hump in Burma. It is mentioned much by an Irish author Mona Rolf. It same size as the Great Pyramid in Egypt.

These images were taken by Hartwig Hausdorf, a Germany researcher. 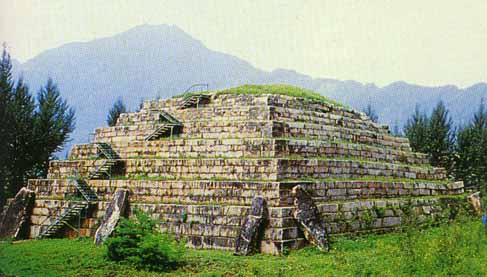 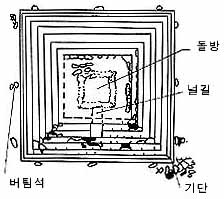 Coffins and ceiling in the inner chamber 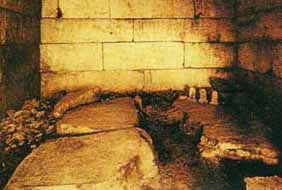 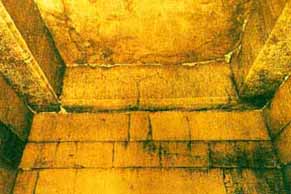 
The 'Chinese Pyramids' and the pole star   PhysOrg - November 30, 2018
The funerary complex of the first Chinese emperor of the Qin dynasty (3 BC) is one of the most famous archaeological sites in the world. This is, of course, due to the discovery of the terracotta statue army, intended to accompany the emperor in the afterlife.

Less well known is the fact that the tomb proper (still not excavated) lies beneath a gigantic, artificial hill of rammed earth. This hill has a square shape, a base side of more than 350 meters and is over 40 meters high, and can easily be called a pyramid. Notably, all the emperors of the subsequent dynasty, the Western Han, chose to be buried under similar pyramids. These mausoleums are still visible today within the northwestern surroundings of Xian along the Wei River. Including the tombs of the queens and other members of royal families, there are over 40 such "Chinese pyramids." Of these, only two have been (partly) excavated. The new study is part of an extensive program of research on the role of astronomy and of the traditional doctrine of feng shui in the Chinese imperial necropolises.

The new study is part of an extensive program of research on the role of astronomy and of the traditional doctrine of feng shui in the Chinese imperial necropolises, and has just been published in Archaeological Research in Asia. The work used simple techniques based on satellite images, together with field surveys to collect new data and, in particular, to study the orientation of the pyramid bases. The Egyptian pyramids are oriented with great precision to the cardinal points by virtue of the strong bonds of the funerary religion of the Egyptian pharaohs with the sky, and in particular with the circumpolar stars.

Although there is no connection with the Egyptian pyramids, the Chinese emperors credited their power as a direct mandate of the heaven, identifying the circumpolar region as a celestial image of the imperial palace and its inhabitants. It was therefore natural to expect the Chinese pyramids, tombs of the emperors, to be oriented to the cardinal points. In this connection, the results of the new study are surprising.

It turns out that these monuments can be classified according to two "families." One such family comprises monuments oriented with good precision to the cardinal points, as expected. In the other family, there are significant deviations from the true north, all of comparable and all on the same "hand " (to the west of the north, looking toward the monument).

It is not possible that this second family resulted from errors of Chinese astronomers and architects. Rudimentary compasses existed at that time, but there is no correspondence with paleomagnetic data. The explanation proposed in the article is thus astronomical: The emperors who built the pyramids of the second family did not want to point to the north celestial pole, which at the time did not correspond to any star, but instead to the star to which the pole would approach in the future: Polaris.

All this discourse may look strange at first sight, but the Earth's axis slowly shifts position in the sky. The Chinese astronomers were almost certainly aware of this. Today, the north celestial pole is identified with Polaris (although in reality the correspondence is not perfect), but at the time of the Han emperors, the pole was still far from Polaris, and with a distance in degrees approximately equal to the deviation of the Chinese pyramids from the geographic north. 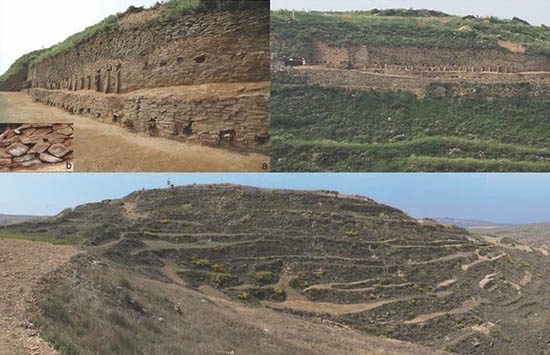 A 4,300-year-old city, which has a massive step pyramid that is at least 230 feet (70 meters) high and spans 59 acres (24 hectares) at its base, has been excavated in China, archaeologists reported in the August issue of the journal Antiquity. The pyramid was decorated with eye symbols and "anthropomorphic," or part-human, part-animal faces. Those figures "may have endowed the stepped pyramid with special religious power and further strengthened the general visual impression on its large audience," the archaeologists wrote in the article. For five centuries, a city flourished around the pyramid. At one time, the city encompassed an area of 988 acres (400 hectares), making it one of the largest in the world, the archaeologists wrote. Today, the ruins of the city are called "Shimao," but its name in ancient times is unknown. 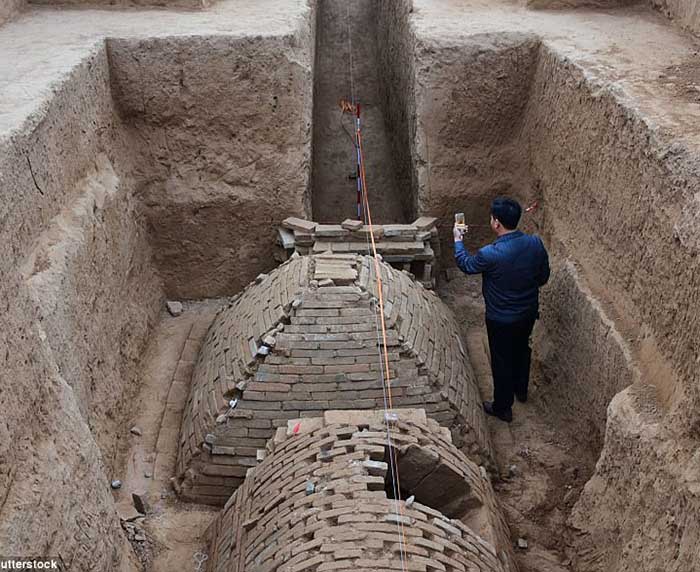 Archaeologists have unearthed a pyramid-shaped tomb under a construction site in central China. Residents are amazed after the unusual ancient burial site was discovered in Zhengzhou, Henan Province, with one calling it 'magical'. Further analysis is yet to be carried out to identify how old the tomb is, who the owner was and why it was built in this particular shape. Chinese media have dubbed the tomb the 'pyramid of Zhengzhou', though the structure is much small in size compared to the real pyramids in Egypt. The tomb was found near a motorway situated about 3,300 feet (1,000 metres) west of the Sinian Grove by the Yellow River, according to Huanqiu.com, an affiliation to People's Daily Online. The area used to be a village, but the it has apparently moved away to make way for a new residential compound. The pyramid-shaped tomb is one of the two tombs found inside a coffin chamber by staff from the Zhengzhou Cultural Relics Bureau. The other tomb is shaped like a half cylinder.