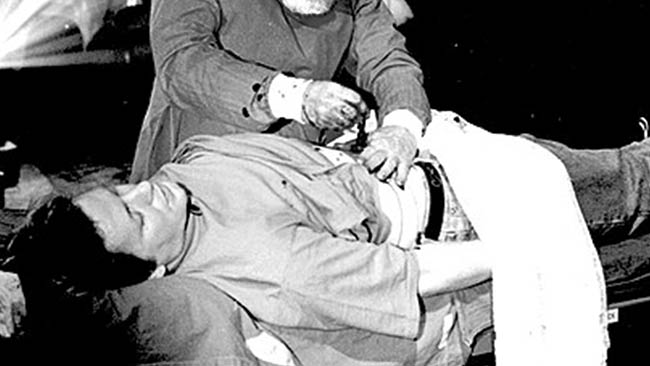 Psychic surgery is a pseudoscientific procedure typically involving the alleged creation of an incision using only the bare hands, the removal of pathological matter, and the spontaneous healing of the incision. Psychic surgery has been condemned in many countries as a form of medical fraud.

It has been denounced by the US Federal Trade Commission as a "total hoax", and the American Cancer Society maintains that psychic surgery may cause needless death by keeping the ill away from life-saving medical care. Medical professionals and skeptics classify it as sleight of hand and any positive results as a placebo effect. It first appeared in the Spiritualist communities of the Philippines and Brazil in the middle of the 20th century, and it has taken different paths in those two countries.

Most cases do not involve actual surgery although some practitioners make real incisions. In regions of the world where belief in evil spirits is prevalent, practitioners will sometimes exhibit objects, such as glass, explaining that the foreign bodies were placed in the patient's body by evil spirits.

In the Philippines, the procedure originated in the 1940s with Eleuterio Terte. Terte and his student Tony Agpaoa trained others in his techniques. Terte and many of his students were associated with a religious organization, the Union Espiritista Christiana de Filipinas (The Christian Spiritist Union of the Philippines.)

In 1959, the procedure became widely known in the U. S. through the publication of Into the Strange Unknown by Ron Ormond and Ormond McGill. They called the practice "fourth dimensional surgery," and said "we still don't know what to think; but we have motion pictures to show it wasn't the work of any normal magician, and could very well be just what the Filipinos said it was - a miracle of God performed by a fourth dimensional surgeon."

Perhaps the most famous psychic surgeon is Alex Orbito, who became well-known in the U. S. through association with actress Shirley MacLaine. On June 14, 2005, Orbito was arrested by Canadian authorities and indicted for fraud.

Psychic surgery made U.S. tabloid headlines in March 1984 when comedian Andy Kaufman, diagnosed with lung cancer, traveled to the Philippines for a six-week course of psychic surgery. Practitioner Jun Labo claimed to have removed large cancerous tumors and Kaufman believed the cancer had been removed. Kaufman died of metastatic carcinoma on May 16, 1984.

The origins of the practice in Brazil are obscure; it may derive from Candomble rituals, or it may have been inspired by reports from the Philippines. In any case, by the late 1950s several "spiritual doctors" were practicing in the country. Many of them were associated with Kardecism, a major spiritualistic religion in Brazil, and claimed to be performing their operations merely as channels for spirits of deceased medical doctors.

The most popular one today (especially abroad) is Joao de Deus, who operates in Abadiania, state of Goias.

According to the descriptions of Y. Omura (1997), current Brazilian psychic surgery appears to be different from that practiced in the Philippines. Omura refers to practitioners using techniques resembling Qi Gong, Shiatsu massage, and chiropractic manipulation.

Many patients were injected with a brown liquid, and minor surgery was performed in about 1/5 of the cases observed. While Arigo performed his operations with kitchen knives in improvised settings, Omura reports that the clamping of the blood vessels and the closings of the surgical wounds are now performed by licensed surgeons or licensed nurses.

There are a handful of practitioners in the UK, notably Stephen Turoff, who operates the Danbury Healing Clinic in Chelmsford, England. A San Francisco Chronicle article refers to psychic surgery as being practiced within "a kind of psychic underground in America, England, Russia and many other countries."

Psychic surgery was discredited by the U.S. Federal Trade Commission in 1975. In a unanimous opinion, the commission declared that "'psychic surgery' is nothing but a total hoax." Judge Daniel H. Hanscom, in granting the FTC an injunction against travel agencies promoting psychic surgery tours, said: "Psychic surgery is pure and unmitigated fakery. The 'surgical operations' of psychic surgeons ... with their bare hands are simply phony."

As a magic trick, psychic surgery is surprisingly easy to duplicate. First, the "surgeon" will slightly roll or pinch the skin over the area of the "operation". When his flattened hand reaches under the roll of skin, it looks and feels as if he's actually reaching into the patient's body.

Of course, the flattened hand isn't empty; the surgeon will have small bags of chicken or rat entrails hidden beneath the table, within easy reach. These simulate the "diseased" tissue that the surgeon is supposedly removing. If the surgeon wants to simulate bleeding, he squeezes a bladder of animal blood. It's a simple illusion requiring very little practice. (Like most magic tricks, it's best practiced in front of a mirror.) If done properly, it can fool most patients and onlookers.

In 1990, the American Cancer Society stated that it found no evidence that "psychic surgery" results in objective benefit in the treatment of any medical condition, and strongly urged individuals who are ill not to seek treatment by psychic surgery.

While not generally hazardous to the patient, medical fraud of this kind carries considerable risk of the patient delaying or forgoing any competent medical help - sometimes with fatal consequences.

One might also note that by reaching into a person's body without exercising universal precautions, the surgeon risks infecting both himself and his patient. Thus, even if the surgeon can reach into the patient without an incision, one serious health problem may be traded for another. Psychic Surgery