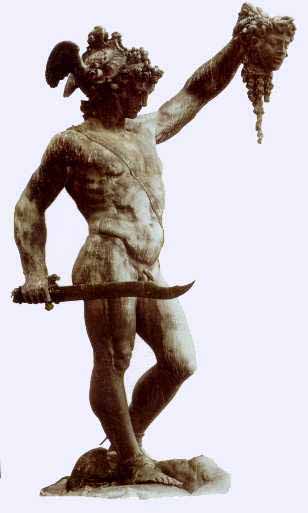 Perseus was the son of Zeus and Danae. Danae's father, King Acrisius, set Danae and her son adrift on the sea because of a prophecy that Perseus would kill him. The two were taken in by Polydectes, the king of Seriphus. Polydectes later conceived a passion for Danae, but was unable to force his attentions on her because Perseus had grown into a redoubtable protector. To get rid of Perseus, Polydectes sent him on a quest to bring back the head of the Gorgon Medusa, a snake-haired maiden who turned all who saw her into stone.

Perseus accomplished his quest with the help of Hermes and Athena. He went first to the Gorgons' sisters, the Graeae, who had only one eye and one tooth which they shared among themselves. Perseus took the eye and the tooth, and agreed to give them back only if the Graeae helped him in his quest. They helped him acquire a pair of winged sandals, a wallet or satchel, and the cap of Hades; the sandals enabled him to fly, the satchel was to carry the Gorgon's head, and the cap conferred invisibility on its wearer. Wearing the cap, he approached Medusa, looking only at her reflection in his shield, and cut off her head.

As he flew back over Africa on his way home, he encountered Atlas; in the course of a struggle, he used the Gorgon's head to turn Atlas to stone (thereby forming the Atlas Mountains). He also dripped blood from the head onto the sands of the African desert, giving birth to the deadly vipers of that region. Later in the journey he saw the maiden Andromeda chained naked to a rock by the sea as a sacrifice to a sea monster. He fell in love with her and bargained with her father, Cepheus, for her hand in marriage if he killed the monster. He succeeded in slaying the beast, but at the wedding feast Phineus, a jilted suitor of Andromeda, angrily demanded the bride. In the battle which followed, Perseus used Medusa's head to turn Phineus and his followers into stone.

When he returned to Seriphus, he found that Polydectes was still persecuting Danae. He used the Gorgon's head once again, and turned Polydectes to stone. He then gave the sandals, satchel and cap to Hermes; he gave the Gorgon's head to Athene, who emblazoned it upon the aegis which protected her in battle. Finally he returned to Acrisius' kingdom, where he fulfilled the prophecy by accidentally killed the king while throwing the discus. 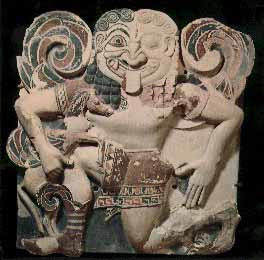 Gorgon - One of three fabled sisters, Stheno, Euryale, and Medusa, with snaky hair and of terrific aspect, the sight of whom turned the beholder to stone. The name is particularly given to Medusa.