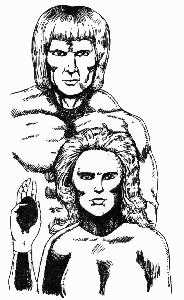 In ufology, Nordic aliens are humanoid extraterrestrials purported to come from the Pleiades who resemble Nordic-Scandinavians. Professed contactees describe them as being six to seven feet tall (about two meters) with long blonde hair, blue eyes, and fair skin. Ufologist George Adamski is credited with being among the first to claim contact with Nordic aliens in the mid 1950s, and scholars note that the mythology of extraterrestrial visitation from beings with features described as Aryan often include claims of telepathy, benevolence, and physical beauty.

Cultural historian David J. Skal wrote that early stories of Nordic-type aliens may have been partially inspired by the 1951 film The Day the Earth Stood Still, in which an extraterrestrial arrives on Earth to warn humanity about the dangers of atomic weapons. Bates College professor Stephanie Kelley-Romano described alien abduction beliefs as "a living myth", and notes that, among believers, Nordic aliens "are often associated with spiritual growth and love and act as protectors for the experiencers."

In contactee and ufology literature, Nordic aliens are often described as benevolent or even "magical" beings who want to observe and communicate with humans and are concerned about the Earth's environment or prospects for world peace. Believers also ascribe telepathic powers to Nordic aliens, and describe them as "paternal, watchful, smiling, affectionate, and youthful."

During the 1950s, many contactees, especially those in Europe, claimed encounters with beings fitting this description. Such claims became relatively less common in subsequent decades, as the grey alien supplanted the Nordic in most alleged accounts of extraterrestrial encounters

Nordics are typically described as six to seven feet tall with long blond hair and blue eyes, and are commonly reported as being male. Their skin is said to range from fair colored to tanned, and they are sometimes reported to wear skintight clothing. Nordic contacts, often from Venus, were frequently reported in the 1950s and 1960s, but declined after that. Purported contactees claim to have witnessed the Nords beaming down from gold or silver colored crescent-shaped UFOs or from gigantic bright cigar-shaped UFOs.

Nordic aliens have been described as benevolent or even "magical" beings who want to observe and communicate with humans. Contactees have said that the Nordics are concerned about the earth's environment or prospects for world peace, and may transmit messages telepathically.

American social worker John Carpenter said that the typical Nordic, as described by those he interviewed, "is paternal, watchful, smiling, affectionate, youthful, and all-knowing." Stephanie Kelley-Romano says that the Nordics "are often associated with spiritual growth and love and act as protectors for the experiencers."

A few claimants say that the Nordics have warned them about the grey aliens, but other claimants say that they have seen Nordics inside the same craft as greys. In such reports, the Nordics are often interpreted as leaders, with the greys as their subordinates. Jenny Randles writes that although she believes Nordics have "certainly" been involved in abductions she feels the abduction is "less essential to the encounter than it is with the Greys."

The term "Nordic" did not come into wide use until the 1980s. In earlier decades, the entities now described as Nordics were often called "Space Brothers". Some of the best known individuals who claimed to interact with Space Brothers include George Adamski, Howard Menger, and Billy Meier (who said his contacts came from the Pleiades system). However, these men's stories are widely considered "absurd hoaxes", in the words of Jerome Clark.

Political scholar and UFOlogist Michael Salla suggested the possibility that United States president Dwight D. Eisenhower met with Nordic aliens at Edwards Air Force Base in February 1954 in an attempt to formulate an agreement over technology exchange and the elimination of the American nuclear arsenal. Such claims are flatly dismissed by archivists at the Eisenhower Presidential Center, who have fielded many questions on the subject over the years.

David J. Skal says that early stories of Nordic-type aliens may have been partially inspired by the 1951 film The Day the Earth Stood Still, in which extraterrestrials arrive on Earth to warn humanity about the dangers of atomic power.

Stephanie Kelley-Romano observes that "white extraterrestrials are those that are most revered", compared to other beings like the greys, and argues that claimants may use their stories about extraterrestrials "as a means of articulating racially based fears". Nordic Aliens   Wikipedia