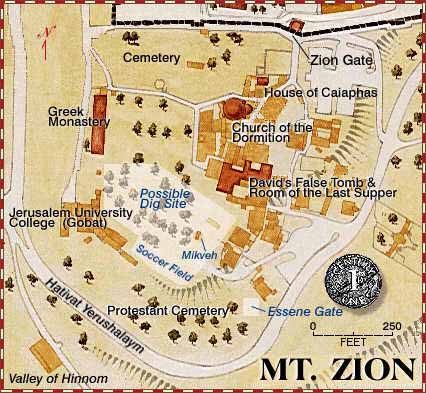 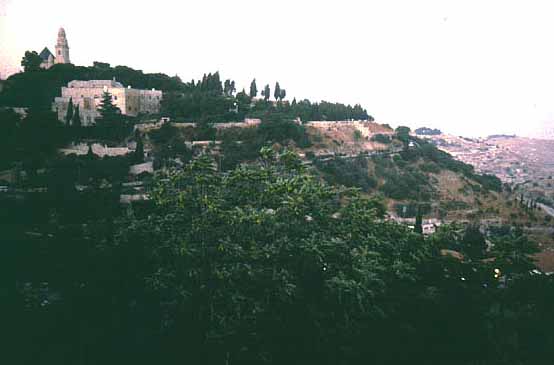 Zion is an archaic term that originally referred to a specific mountain near Jerusalem (Mount Zion), on which stood a Jebusite fortress of the same name that was conquered by David. "Zion" became applied to the section of Jerusalem where the fortress stood, and after Solomon's Temple was built there, it came to refer to the temple grounds and the temple itself. Today "Zion" is often used metaphorically, to symbolize Jerusalem and the Promised Land to come, in which God dwells among his chosen people.

The modern hill south of the Old City's Armenian Quarter now called Zion is the result of a misnomer dating from the Middle Ages when pilgrims mistook the relatively large, flat summit for the original site of the City of David. Crowning the summit of the modern Mt. Zion is Dormitian Abbey. Commemorating the rest that Mary entered into, this complex was constructed by Kaiser Wilhelm II beginning in 1900. The church was built in response to a request to have a German Catholic church in the city following the Kaiser's support for the construction of the Lutheran Church of the Redeemer in 1898. Dormitian Abbey is home today to German Catholic monks. 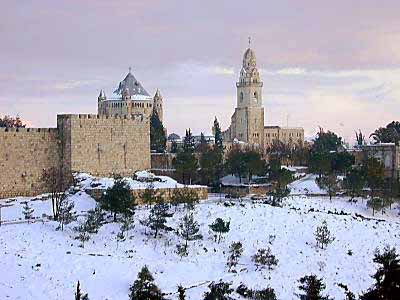 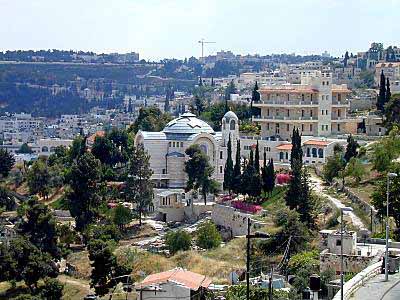 On the southeastern slope of the hill is one of the traditional locations for the house of Caiaphas. Gallicantu means "cock crowing" and it remembers the three denials of Peter. Built atop the ruins of a Byzantine church and monastery, Catholic pilgrims believe that the prison in which Christ was held is located inside the church. Others believe that a more likely location for Caiaphas' house is in the Armenian property outside Zion Gate. 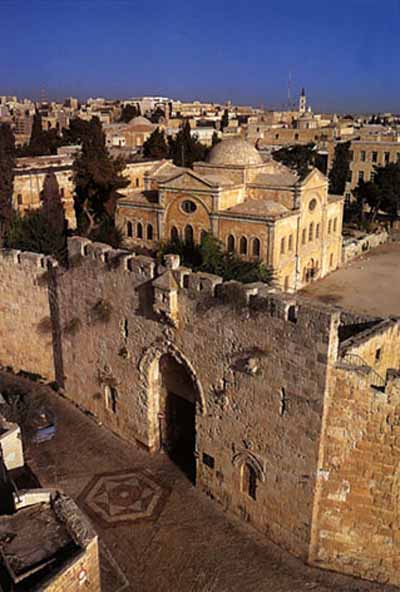 Mount Zion is the highest point in the city of Jerusalem, equally as high as the Temple Mount, is the Western Hill. This is the summit and western slope of the ridge just to the east of the Tyropean Valley and the Lower City.

The modern Mt. Zion is a misnomer applied by Byzantine pilgrims who thought that the larger, flatter Western Hill must be the original City of David. Archaeological evidence has shown that this hill was only incorporated within the city's fortifications in the 8th century B.C. but the name has stuck. The Hinnom Valley borders this hill on its western and southern sides.

In the timeline of Jesus, this section of the city was populated by the wealthy and ruling classes. The people who lived in this section were Hellenistic. They were supportive of the Roman government, primarily because they benefitted from it.

Herod's Palace was located in this section, at the very top of the hill. Covering about five acres, this elegant structure boasted two huge wings, and could accommodate hundreds of guests. It was Herod's main palace in all the land, and it featured fountains, gardens, groves of trees, huge porches, and banquet halls. Its beauty rivaled that of another architectural masterpiece built by Herod, the Temple itself. When Herod died his palace became the home of the Roman government in Jerusalem.

Adjacent to the palace was a triangular fortress, the citadel. Three huge towers formed the corners of the triangle. The tallest, soaring 145 feet into the air, was called the Phaesel in memory of Herod's brother who committed suicide by banging his head against the wall of the cell in which he had been imprisoned. Another tower was the Miriam, named for the only person Herod ever loved, the wife he nonetheless executed when her enemies told him she had been involved in an affair. The third tower was called the Hippicus, named after a friend of Herod's.

There was also a large theater located in the Upper City, a structure that must have been anathema to the Pharisees, since it was not only a showcase of Roman culture, but also presented shows that today would be considered pornographic.

Theaters, of course, required actors. The Greek word for "actor" is "hypocrite," and Jesus often applied that name to religious leaders who preached one lifestyle and lived another.

When the wise men came to Jerusalem searching for the newborn "king of the Jews" they almost certainly went first to Herod's palace, no doubt expecting to find a king in exactly such a royal setting.

Jesus, of course, was born seven miles to the south of Jerusalem, in Bethlehem, under very humble circumstances. He was probably at least a year old when the magi came looking for him, and Mary and Joseph were almost certainly not still living in that stable behind the inn.

Still, it's interesting to speculate what the wise men must have thought when they left the splendor of Herod's palace and found themselves knocking on the doors of humble cottages in Bethlehem. It's also interesting to note that when at last they found him they knew him at once, and fell on their knees and worshipped him.

Scripture does not tell us how many magi there were who came all that distance to pay homage to a new king. Over the centuries legend has held that there were three, but this assumption probably sprang from the three gifts: frankincense, gold, and myrhh. Also, legend, reflected in countless nativity scenes, places the magi in the stable the same night the shepherds visited.

But we have considerable assurance the boy Jesus was at least a year old when the foreign kings came calling. Herod, remember, after consulting with his own Jewish astrologers, priests, and prophets, killed every male child up to the age of two in the vicinity of Bethlehem.

Here, living in this humble carpenter's cottage, was the Son of God, the Messiah, instantly recognized by the Gentile kings from the east -- probably Persia -- and completly overlooked by the Jewish people to whom he had been sent. To God's chosen people, Jesus was merely a poor little boy whose parents couldn't afford better accommodations on the night he was born.

Even today God chooses humble people to accomplish His work. As Jesus pointed out during his ministry, no one can serve both God and money. When God needs something done He looks for people who are not likely to be distracted by material concerns. It's true that Mother Teresa was a rich woman when God called her into his service, but she quickly divested herself of every dime, donating it all to the work of the kingdom.

When Jesus was arrested and taken before Pilate, the meeting probably occurred in the royal palace on Mount Zion.

Herod the Great had been long dead, and his palace was, in Jesus's day, the home of the Roman ruler in Judea. Pilate came outside to meet the Jews who took Jesus there, because they would have been defiled, rendered ceremonially unclean, had they set foot in the Roman palace.

Roman soldiers, however, took Jesus inside to question him, and it was in the palace that they beat him and spat on him and placed the crown of thorns on his head. Luke says that Pilate sent Jesus to Herod Antipas, son of Herod the Great, and tetrarch of Galilee, who happened to be visiting in Jerusalem. It's safe to assume that Herod was a guest in the palace built by his father, the palace that now housed the Roman authority in the land.

After all the abuse heaped upon Jesus during the interrogation, Pilate took him back outside and told the Jewish priests, in effect, "This man is not guilty of any violation of Roman law."

Some theologians believe Jesus was tried in the Antonia, the Roman fort adjacent to the temple. While it's likely that most government business was conducted in the Antonia, the arrest of Jesus was accomplished in the middle of the night, and Pilate would undoubtedly have been in his living quarters, in the Praetorium, the palace itself. 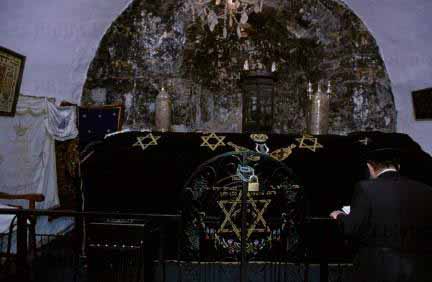 Mount Zion is also reputed to contain the tomb of King David - not the actual one. For more than a thousand years, Jewish tradition has identified Mount Zion as being the last resting place of King David and his descendants, the Kings of Yehudah. The fearless Jewish traveler,"Benjamin of Tudela", who visited Jerusalem in the twelfth century describes how the royal graves were discovered. "After the collapsed of a church on Mount Zion, workman found previously hidden caves under the rubble. They entered the caves and wanted to steal the treasures they saw. However, they were driven back by a powerful and mysterious wind. Fainting from fright, they regained consciousness to hear a menacing voice warning them to leave."

Towards the end of the nineteenth century, non Moslems were only allowed access to the rooms above the Tomb. For the Festival of Shavuos, the traditional anniversary of King David's passing, the British Mandate allowed Jews closer access. After the War of Independence in 1948, Mount Zion was in the Israeli section of Jerusalem and the Royal Tomb became a focus of pilgrimage. Once again the prayer's of all worshipers could be freely offered at this most revered site.

Just outside the Zion Gate of the old city in Jerusalem, near the crest of Mount Zion, lie the partial remains of an ancient building known as the Cenacle. These consist of a niche, walls, floors, and foundations incorporated into a building now venerated by both Jews and Christians.

For Jews the site is the traditional location of David's Tomb (the pseudo-tomb not the actual tomb) marked by a small synagogue on the first floor. Christians regard this location as that of the ancient venue of the Upper Room or Cenacle. A memorial of this heritage, dating to the 14th century, consists of the reconstructed Room of the Last Supper and the adjoining Chapel of the Holy Spirit on the second floor. While a single building houses the two memorials, each has a separate entrance.

The Cenacle, also known as the Coenaculum and erroneously as The Tomb of David, appears as number 5 in this index to the famous Madaba Map of Jerusalem.

Although there is general agreement that the original building was a first-century CE synagogue, both Jews and Christians claim it as their own relying on a statement by Epiphanius (CE ca. 315- 402/3 ). Writing late in the fourth century, he claimed that when the Roman emperor Hadrian (CE 76-138 ) visited Jerusalem (ca. 131/132) a small "Church of God" and seven synagogues existed on Mount Zion. Christians argue that the present-day remains are those of the small Judeo-Christian synagogue, which Epiphanius called a Church of God, constructed on the site of the Upper Room by Judeo-Christian refugees returning from Pella about CE 73. Jews claim it as one of the seven synagogues of the Jews observed by Hadrian.

An earlier account by a pilgrim from Bordeaux, presumably a Judeo-Christian who visited Jerusalem in CE 333, refers to the tradition of seven synagogues on Mount Zion as well. Mount Zion 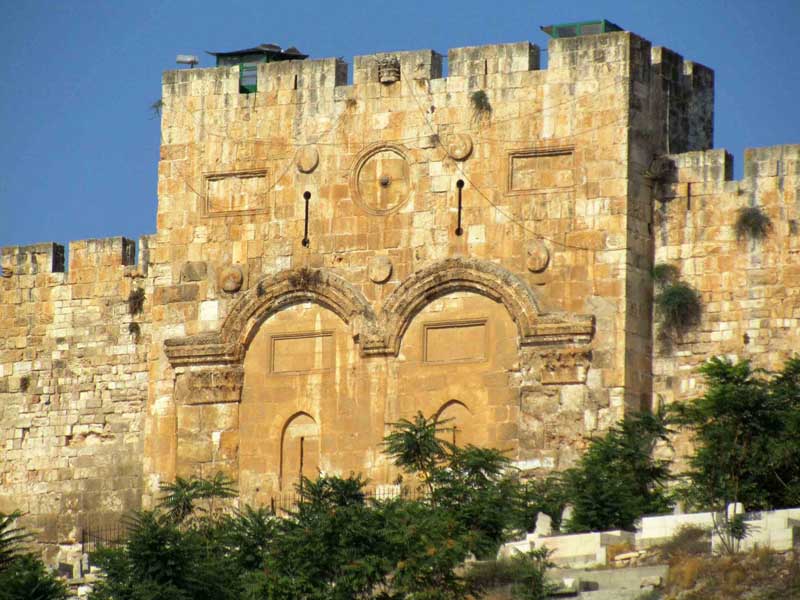