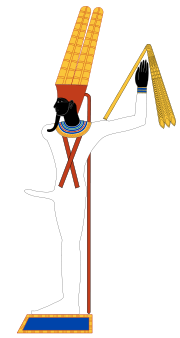 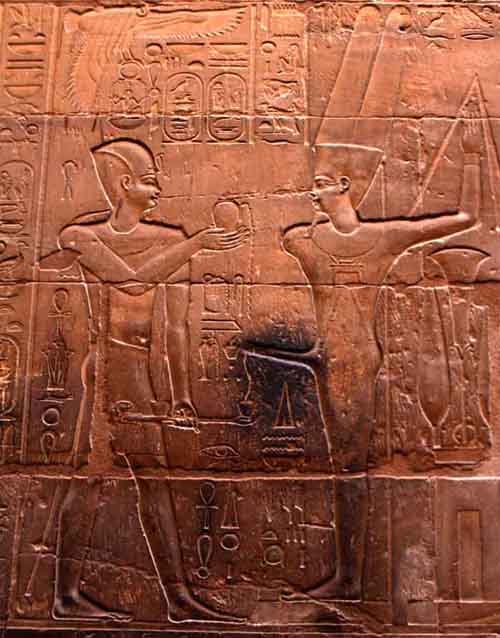 Min is an Ancient Egyptian god whose cult originated in predynastic times (4th millennium BC). He was represented in many different forms, but was often represented in male human form, shown with an erect penis which he holds in his left hand and an upheld right arm holding a flail. As Khem or Min, he was the god of reproduction; as Khnum, he was the creator of all things, "the maker of gods and men".

As a god of fertility, he was shown as having black skin to reflect the fertile black mud of the Nile's inundation. His cult was strongest in Coptos and Akhmim (Panopolis), where in his honor great festivals were held celebrating his "coming forth" with a public procession and presentation of offerings.

His other associations include the eastern desert and links to the god Horus.

Flinders Petrie excavated two large statues of Min at Qift which are now in the Ashmolean Museum and it is thought by some that they are pre-dynastic. 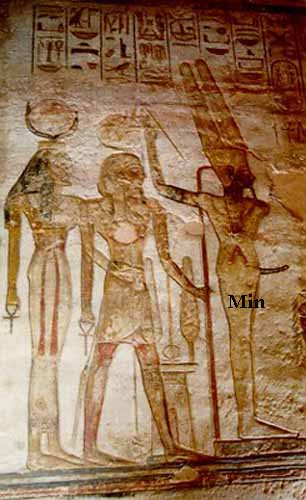 Although not mentioned by name a reference to 'he whose arm is raised in the East' in the Pyramid Texts is thought to refer to Min. His importance grew in the Middle Kingdom when he became even more closely linked with Horus as the deity Min-Horus. By the New Kingdom he was also fused with Amen in the deity Min-Amen-kamutef (Min-Amen - bull of his mother). Min's shrine was crowned with a pair of bull horns.

As the central deity of fertility and possibly orgiastic rites Min became identified by the Greeks with the god Pan. One feature of Min worship was the wild prickly lettuce Lactuca virosa and Lactuca serriola of which is the domestic version Lactuca sativa which has aphrodisiac and opiate qualities.

He also had connections with Nubia. However, his main centers of worship were Qift (Coptos) and Akhmim (Khemmis). As a god of male sexual potency, he was honoured during the coronation rites of the New Kingdom, when the Pharaoh was expected to sow his seed - generally thought to have been plant seeds, although there have been controversial suggestions that the Pharaoh was expected to demonstrate that he could ejaculate - and thus ensure the annual flooding of the Nile.

At the beginning of the harvest season, his image was taken out of the temple and brought to the fields in the festival of the departure of Min, when they blessed the harvest, and played games naked in his honouredr, the most important of these being the climbing of a huge (tent) pole.

In Egyptian art, Min was depicted as wearing a crown with feathers, and often holding his penis erect in his left hand and a flail (referring to his authority, or rather that of the Pharaohs) in his upward facing right hand. Around his forehead, Min wears a red ribbon that trails to the ground, claimed by some to represent sexual energy. The symbols of Min were the white bull, a barbed arrow, and a bed of lettuce, that the Egyptians believed to be an aphrodisiac, as Egyptian lettuce was tall, straight, and released a milk-like substance when rubbed, characteristics superficially similar to the penis.

Some war goddesses were depicted with the body of Min (including the phallus). This led to depictions, ostensibly of Min, with the head of a lioness. Min usually was depicted in an ithyphallic (with an erect and uncovered phallus) style.

Christians routinely defaced his monuments in temples they co-opted and Victorian Egyptologists would take only waist-up photographs of Min, or otherwise find ways to cover his protruding penis. However, to the ancient Egyptians, Min was not a matter of scandal - they had very relaxed standards of nudity: in their warm climate, farmers, servants, and entertainers often worked partially or completely naked, and children did not wear any clothes until they came of age.

In the 19th century, there was an alleged erroneous transcription of the Egyptian for Min as ("khem"). Since Khem was worshipped most significantly in Akhmim, the separate identity of Khem was reinforced, Akhmim being understood as simply a corruption of Khem.