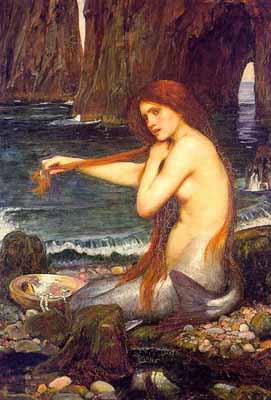 A mermaid is a mythological aquatic creature with a human head and torso and the tail of an aquatic animal such as a fish. The word is a compound of mere, the Old English word for "sea," and maid, a woman. The male equivalent is a merman, however the term mermaid is sometimes used for males. Various cultures throughout the world have similar figures, typically depicted without clothing.

Much like sirens, mermaids would sometimes sing to people and gods and enchant them, distracting them from their work and causing them to walk off the deck or run their ships aground. Other stories have them squeezing the life out of drowning men while attempting to rescue them. They are also said to take humans down to their underwater kingdoms.

In Hans Christian Andersen's The Little Mermaid it is said that they forget that humans cannot breathe underwater, while others say they drown men out of spite.

The sirens of Greek mythology are sometimes portrayed in later folklore as mermaid-like; in fact, some languages use the same word for both bird and fish creatures, such as the Maltese word 'sirena'. Other related types of mythical or legendary creatures are water fairies (e.g. various water nymphs) and selkies, animals that can transform themselves from seals to humans.

The first known mermaid stories appeared in Assyria, ca. 1000 BC. Atargatis, the mother of Assyrian queen Semiramis, was a goddess who loved a mortal shepherd and in the process killed him. Ashamed, she jumped into a lake to take the form of a fish, but the waters would not conceal her divine beauty. Thereafter, she took the form of a mermaid - human above the waist, fish below - though the earliest representations of Atargatis showed her as being a fish with a human head and legs, similar to the Babylonian Ea.

The Greeks recognized Atargatis under the name Derketo. Prior to 546 BC, the Milesian philosopher Anaximander proposed that mankind had sprung from an aquatic species of animal. He thought that humans, with their extended infancy, could not have survived early on. This idea reappeared as the Aquatic ape hypothesis in the twentieth century.

A popular Greek legend has Alexander the Great's sister, Thessalonike, turn into a mermaid after she died. She lived, it was said, in the Aegean and when sailors would encounter her, she would ask them only one question: "Is Alexander the king alive?", to which the correct answer would be "He lives and still rules". Any other answer would spur her into a rage, where she transformed into a Gorgon and meant doom for the ship and every sailor onboard.

The Arabian Nights (One Thousand and One Nights) includes several tales featuring "Sea People", such as Djullanar the Sea-girl. Unlike the depiction in other mythologies, these are anatomically identical to land-bound humans, differing only in their ability to breathe and live underwater. They can (and do) interbreed with land humans, the children of such unions sharing in the ability to live underwater.

In another Arabian Nights tale, "Abdullah the Fisherman and Abdullah the Merman", the protagonist Abdullah the Fisherman gains the ability to breathe underwater and discovers an underwater submarine society that is portrayed as an inverted reflection of society on land, in that the underwater society follows a form of primitive communism where concepts like money and clothing do not exist. Other Arabian Nights tales deal with lost ancient technologies, advanced ancient civilizations that went astray, and catastrophes which overwhelmed them.

In "The Adventures of Bulukiya", the protagonist Bulukiya's quest for the herb of immortality leads him to explore the seas, where he encounters societies of mermaids."Julnar the Sea-Born and Her Son King Badr Basim of Persia" is yet another Arabian Nights tale about mermaids. When sailors come the mermaids would sing, but some men are led straight to their doom. If they follow the mermaids' lovely and beautiful voices, they do not know what they are doing or where they're going.

Mermaids were noted in British folklore as unlucky omens - both foretelling disaster and provoking it. Several variants of the ballad Sir Patrick Spens depict a mermaid speaking to the doomed ships; in some, she tells them they will never see land again, and in others, she claims they are near shore, which they are wise enough to know means the same thing. They can also be a sign of rough weather.

Some mermaids were described as monstrous in size, up to 2000 feet.

Mermaids could also swim up rivers to freshwater lakes. One day, in a lake near his house, the Laird of Lorntie saw, as he thought, a woman drowning, and went to aid her; a servant of his pulled him back, warning that it was a mermaid, and the mermaid screamed after that she would have killed him if it were not for his servant.

On occasion, mermaids could be more beneficent, giving humans means of cure.

Some tales raised the question of whether mermaids had immortal souls to answer it in the negative. The figure of L’ Ban appears as a sanctified mermaid, but she was originally a human being transformed into a mermaid; after three centuries, when Christianity had come to Ireland, she came to be baptized.

Mermen were also noted as wilder and uglier than mermaids, but they were described as having little interest in humans.

n some ancient fairytales of China, mermaid is a special species whose tears can turn into priceless pearls. What's more, mermaids can also knit an extremely valuable material which is not only slight but also beautiful and translucent. Because of this, fishermen longed to catch them, but it's difficult for them to survive for mermaids' splendid singing can simply drag them to coma. Actually, mermaid is a symbol of wonderful creatures in Ancient China. They are deft,beautiful and versatile. And the fishermen who want to catch mermaids are a symbol of negative character.

The mermaid, or syrenka, is the symbol of Warsaw. Images of a mermaid have been used on the crest of Warsaw as its symbol since the middle of the 14th century. Several legends associate Triton of mythology with the city, which may have been where the association with mermaids originated.

Among the Neo-Ta’no nations of the Caribbean the mermaid is called Aycayia. Her attributes relate to the goddess Jagua, and the hibiscus flower of the majagua tree Hibiscus tiliaceus. Examples from other cultures are the Mami Wata of West and Central Africa, the Jengu of Cameroon, the Merrow of Ireland and Scotland, the Rusalkas of Russia and Ukraine, the Iara from Brazil and the Greek Oceanids, Nereids, and Naiads. One freshwater mermaid-like creature from European folklore is Melusine, who is sometimes depicted with two fish tails, and other times with the lower body of a serpent. It is said in Japan that eating the flesh of a ningyo can grant unaging immortality. In some European legends mermaids are said to be unlucky.

Mermaids and mermen are also characters of Philippine folklore, where they are locally known as sirena and siyokoy, respectively. The Javanese people believe that the southern beach in Java is a home of Javanese mermaid queen Nyi Roro Kidul.

Mermaids are said to be known for their vanity, but also for their innocence. They often fall in love with human men, and are willing to go to great extents to prove their love with humans. Unfortunately, especially with younger mermaids, they tend to forget humans cannot breathe underwater. Their male counterparts, mermen, are rarely interested in human issues, but in the Finnish mythology merpeople are able to grant wishes, heal sickness, lift curses, brew magic potions and sometimes can carry a trident. Mermaids share some of the same characteristics.

Claimed sightings of dead or living mermaids have come from places such as Java and British Columbia. There are two Canadian reports from the area of Vancouver and Victoria, one from sometime between 1870 and 1890, the other from 1967.

In August 2009, the town of Qiryat Yam in Israel offered a prize of $1 million for anyone who could prove the existence of a mermaid off its coast, after dozens of people reported seeing a mermaid leaping out of the water like a dolphin and doing aerial tricks before returning to the depths.

cording to Dorothy DinnersteinŐs book, The Mermaid and the Minotaur, human-animal hybrids such as the minotaur and the mermaid convey the emergent understanding of the ancients that human beings were both one with and different from animals and that, as such, humans' "nature is internally inconsistent, that our continuities with, and our differences from, the earth's other animals are mysterious and profound; and in these continuities, and these differences, lie both a sense of strangeness on earth and the possible key to a way of feeling at home here".