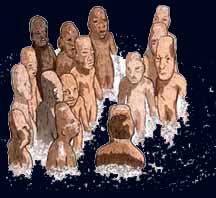 Mud men from the Popul Vuh 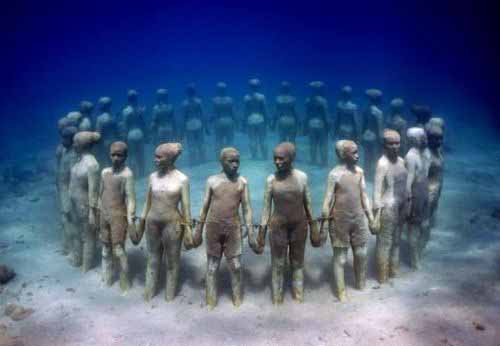 The Maya of Mesoamerica creation story is recounted in the book Popol Vuh.

The Popol Vuh gives a sequence of four efforts at creation: First were animals, then wet clay, wood, then last, the creation of the first ancestors from maize dough. To this, the Lacandons add the creation of the main kin groupings and their 'totemic' animals. The creation of humankind is concluded by the Mesoamerican tale of the opening of the Maize (or Sustenance) Mountain by the Lightning deities.

The best-known hero myth is about the defeat of a bird demon and of the deities of disease and death by the Hero Twins, Hunahpu and Xbalanque. Of equal importance is the parallel narrative of a maize hero defeating the deities of Thunder and Lightning and establishing a pact with them. Although its present spread is confined to the Gulf Coast areas, various data suggest that this myth was once a part of Mayan oral tradition as well. Important mythological fragments about the heroic reduction of the jaguars have been preserved by the Tzotziles.


One myth defines the relation between mankind and the game and crops. An ancestral hero - Xbalanque in a Kekchi tradition - woos the daughter of an Earth God; the hero's wife is finally transformed into game, bees, snakes and insects, or the maize. If the hero gets the upper hand, he becomes the Sun, his wife the Moon. A moralistic Tzotzil version has a man rewarded with a daughter of the Rain Deity, only to get divorced and lose her again.


The origin of Sun and Moon is not always the outcome of a Marriage with the Earth. From Chiapas and the western Guatemalan Highlands comes the tale of Younger Brother and his jealous Elder Brethren: Youngest One becomes the Sun, his mother becomes the Moon, and the Elder Brethren are transformed into wild pigs and other forest animals. In a comparable way, the Elder Brethren of the Popol Vuh Twin myth are transformed into monkeys, with their younger brothers becoming Sun and Moon.


The three surviving Mayan books are mainly of a ritual and also (in the case of the Paris codex) historical nature, and contain but few mythical scenes. Although a sort of 'strip books' may once have existed, it is very much to be doubted that mythical narratives were ever completely rendered hieroglyphically. As a consequence, depictions on temple walls and movable objects (especially the so-called 'ceramic codex') are used to aid reconstruction of pre-Spanish Mayan mythology.

A main problem with depictions is to define what constitutes a mythological scene, for any given scene might in principle also represent a moment in a ritual sequence, a visual metaphor stemming from oral literature, a scene from mundane life, or a historical event. At this stage of our understanding, it is, in any case, clear that the Twin myth - albeit it in a version which considerably diverged from the Popol Vuh - already circulated in the Classic Period. In some cases, ancient Mayan myths may only have been preserved by neighboring peoples; the narrative of the principal Maya maize god, and, to a lesser extent, that of the Bacabs are cases in point. As the process of hieroglyphical decipherment proceeds, the short explanatory captions often included within the scenes will hopefully be restored to their original eloquence, and make ancient narrative come to life more fully.


In Maya mythology, Tepeu and Gucumatz (also known as Kukulkan, and as the Aztec's Quetzalcoatl) are referred to as the Creators, the Makers, and the Forefathers. They were two of the first beings to exist and were said to be as wise as sages. Huracan, or the Heart of Heaven, also existed and is given less personification. He acts more like a storm, of which he is the god.

Tepeu and Gucumatz hold a conference and decide that, in order to preserve their legacy, they must create a race of beings who can worship them. Huracan does the actual creating while Tepeu and Gucumatz guide the process. Earth is created, but the gods make several false starts in setting humanity upon the earth. Animals were created first; however, with all of their howling and squawking they did not worship their creators and were thus banished forever to the forest. Man is created first of mud, but they just crumbled and dissolved away.

Other gods are summoned and man is next created of wood but has no soul, and they soon forgot their makers, so the gods turned all of their possessions against them and brought a black resinous rain down on their heads. Finally man is formed of masa or corn dough by even more gods and their work is complete. As such, the Maya believed that maize was not just the cornerstone of their diet, but they were also made of the same stuff.

In the beginning there is only sky and sea, personified as a trinity of gods called Heart-of-Sky. They decide that they want someone to praise them. They begin by saying "Earth", which appears on demand from the sea. This is followed by mountains and trees, and Heart-of-Sky establish that "our work is going well".

Next the creatures of the forest:= were created -- birds, deer, jaguars and snakes. They are told to multiply and scatter, and then to speak and "pray to us". But the animals just squawk and howl. They are consequently humbled and will become servants to whoever will worship Heart-of-Sky. So Heart-of-Sky try to make some more respectful creatures from mud. But the results are not great, and they allow the new race to be washed away.

They call upon their grandparents, who suggest wood as an appropriate medium. But the wooden people are just mindless robots, so Heart-of Sky set about the destruction of this new race by means of a rain-storm. This causes the animals to turn against the wooden people; even their pots and querns rebel, and crush the peoples' faces. The wooden people escape to the forests and are turned into monkeys. Heart-of-Sky then make yet another attempt at creating a suitably respectful race, and finally succeed by fashioning humans out of maize-corn dough.

The Popol Vuh, the sacred book of the Maya, contains within its creation story a tale of the destruction of the first beings by a flood. This flood differs from others in that it is not a punishment, but rather a remedy for a faulty creation. The Feathered Serpent first created man from mud. These creatures were a failure; they couldn't see, they dissolved when it rained, etc. So the god broke them up and tried again. "This time he made men out of wood. They were better than the mud-men. They could walk and talk; they had many children, built many houses, but they had no minds nor souls nor hearts. The Feathered Serpent - Quetzalcoatl was disappointed with what he had created, so he sent a great flood to cleanse the earth of his mistake.

In the beginning was only Tepeu and Gucumatz another name for Quetzalcoatl. These two sat together and thought, and whatever they thought came into being. They thought earth, and there it was. They thought mountains, and so there were. They thought trees, and sky, and animals etc, and each came into being. But none of these things could praise them, so they formed more advanced beings of clay. But these beings fell apart when they got wet, so they made beings out of wood, but they proved unsatisfactory and caused trouble on the earth. The gods sent a great flood to wipe out these beings, so that they could start over. With the help of Mountain Lion, Coyote, Parrot, and Crow they fashioned four new beings. These four beings performed well and are the ancestors of the Quich.

Somewhere to the north the first humans climbed out of a hole in the earth into the sunlight. The underground place from which they came is called Sipapu. This is a sacred place. The Great Spirit protected them as they wandered the land. At long last they came upon a place they knew was meant for them. They settled there.

The great spirit Quatz created woman, whom he left alone in the dark forest. The woman lamented day and night, until Quatz took pity and appeared to her in a canoe of copper, in which many handsome young men were rowing. One of the rowers told her it was the great spirit who was supplying her with the companionship she craved. At these words she cried the more, and as the tears trickled down, they fell to the ground. Quatz commanded her to look, and she saw with amazement a tiny child, a boy, entirely formed. Her firstborn son became the ancestor of the taises(?), while from her other sons the common people are descended.