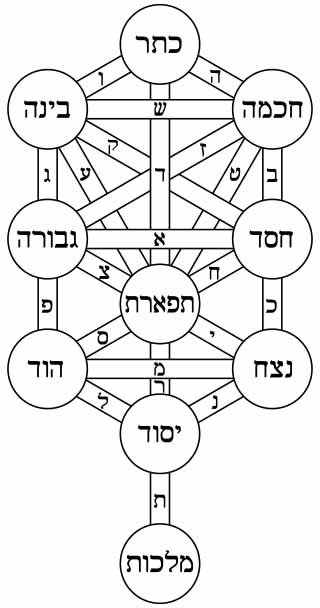 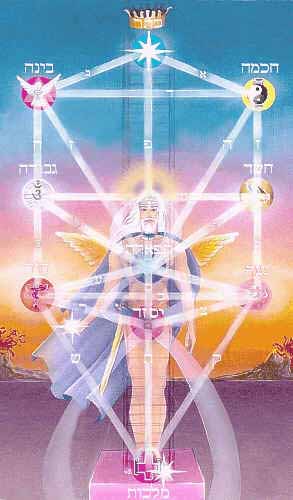 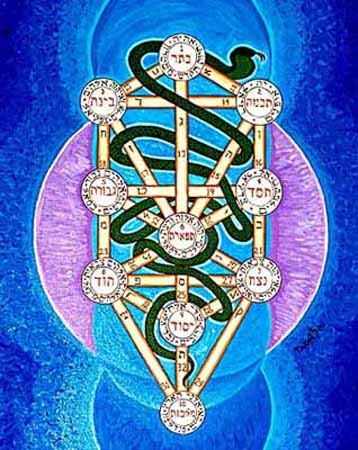 
literally "parallel/corresponding," or "received tradition") is an esoteric method, discipline, and school of thought that originated in Judaism. A traditional Kabbalist in Judaism is called a Mekubbal.

Kabbalah's definition varies according to the tradition and aims of those following it, from its religious origin as an integral part of Judaism, to its later Christian, New Age, and Occultist/western esoteric syncretic adaptations. Kabbalah is a set of esoteric teachings meant to explain the relationship between an unchanging, eternal, and mysterious Ein Sof (infinity) and the mortal and finite universe (God's creation). While it is heavily used by some denominations, it is not a religious denomination in itself. It forms the foundations of mystical religious interpretation. Kabbalah seeks to define the nature of the universe and the human being, the nature and purpose of existence, and various other ontological questions. It also presents methods to aid understanding of the concepts and thereby attain spiritual realization.

Kabbalah originally developed within the realm of Jewish tradition, and kabbalists often use classical Jewish sources to explain and demonstrate its esoteric teachings. These teachings are held by followers in Judaism to define the inner meaning of both the Hebrew Bible and traditional Rabbinic literature and their formerly concealed transmitted dimension, as well as to explain the significance of Jewish religious observances. 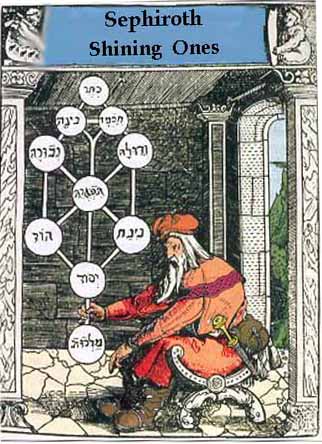 According to adherents of Kabbalah, the origin of Kabbalah begins with the Tanakh (the Hebrew Bible). According to Midrash, God created the universe with "Ten utterances" or "Ten qualities." When read by later generations of Kabbalists, the Torah's description of the creation in the Book of Genesis reveals mysteries about the godhead itself, the true nature of Adam and Eve, the Garden of Eden, the Tree of Knowledge of Good and Evil and the Tree of Life, as well as the interaction of these supernal entities with the Serpent which leads to disaster when they eat the forbidden fruit, as recorded in Genesis 2.

The Bible provides ample additional material for mythic and mystical speculation. The prophet Ezekiel's visions in particular attracted much speculation, as did Isaiah's Temple vision (Chapter 6). Jacob's vision of the ladder to heaven is another text providing an example of a mystical experience. Moses' experience with the Burning bush and his encounters with God on Mount Sinai, are all evidence of mystical events in the Tanakh, and form the origin of Jewish mystical beliefs.

Jewish mystical traditions always appeal to an argument of authority based on antiquity. As a result, virtually all works pseudepigraphically claim or are ascribed ancient authorship. For example, Sefer Raziel HaMalach, an astro-magical text partly based on a magical manual of late antiquity, Sefer ha-Razim, was, according to the kabbalists, transmitted to Adam (after being evicted) by the angel Raziel. Another famous work, the Sefer Yetzirah, supposedly dates back to the patriarch Abraham. According to Apocalyptic literature, esoteric knowledge, such as magic, divination, and astrology, was transmitted to humans in the mythic past by the two angels, Aza and Azaz'el (in other places, Azaz'el and Uzaz'el) who 'fell' from heaven (see Genesis 6:4).

This appeal to antiquity has also shaped modern theories of influence in reconstructing the history of Jewish mysticism. The oldest versions of the Jewish mysticism have been theorized to extend from Assyrian theology and mysticism. Dr. Simo Parpola, a researcher at the University of Helsinki, has made some suggestive findings on the matter, particularly concerning an analysis of the Sefirot. Noting the general similarity between the Sefirot of the Kabbalah and the Tree of Life of Assyria, he reconstructed what an Assyrian antecendent to the Sepiroth would look like.

Jewish forms of esotericism did, however, exist over 2,000 years ago. Ben Sira warns against it, saying: "You shall have no business with secret things" (Sirach iii. 22; compare Talmud Hagigah 13a; Midrash Genesis Rabbah viii.).

Apocalyptic literature belonging to the second and first pre-Christian centuries contained some elements that carry over to later Kabbalah. According to Josephus such writings were in the possession of the Essenes, and were jealously guarded by them against disclosure, for which they claimed a hoary antiquity (see Philo, "De Vita Contemplativa," iii., and Hippolytus, "Refutation of all Heresies," ix. 27).

That books containing secret lore were kept hidden away by (or for) the "enlightened" is stated in IV Esdras xiv. 45-46, where Pseudo-Ezra is told to publish the twenty-four books of the canon openly that the worthy and the unworthy may alike read, but to keep the seventy other books hidden in order to "deliver them only to such as be wise" (compare Dan. xii. 10); for in them are the spring of understanding, the fountain of wisdom, and the stream of knowledge.

Instructive for the study of the development of Jewish mysticism is the Book of Jubilees written around the time of King John Hyrcanus. It refers to mysterious writings of Jared, Cain, and Noah, and presents Abraham as the renewer, and Levi as the permanent guardian, of these ancient writings.

It offers a cosmogony based upon the twenty-two letters of the Hebrew alphabet, and connected with Jewish chronology and Messianology, while at the same time insisting upon the heptad (7) as the holy number rather than upon the decadic (10) system adopted by the later haggadists and the Sefer Yetzirah.

The Pythagorean idea of the creative powers of numbers and letters was shared with Sefer Yetzirah and was known in the time of the Mishnah (before 200 CE).

Early elements of Jewish mysticism can be found in the non-Biblical texts of the Dead Sea Scrolls, such as the Song of the Sabbath Sacrifice. Some parts of the Talmud and the midrash also focus on the esoteric and mystical, particularly Chagigah 12b-14b.

Many esoteric texts, among them Hekalot Rabbati, Sefer HaBahir, Torat Hakana, Sefer P'liyah, Midrash Otiyot d'Rabbi Akiva, the Bahir, and the Zohar claim to be from the talmudic era, though it is clear now that some of these works, most notably the Bahir and Zohar, are actually medieval works pseudepigraphically ascribed to the ancient past.

In the medieval era Jewish mysticism developed under the influence of the word-number esoteric text Sefer Yetzirah. Jewish sources attribute the book to the biblical patriarch Abraham, though the text itself offers no claim as to authorship. This book, and especially its embryonic concept of the "sefirot," became the object of systematic study of several mystical brotherhoods which eventually came to be called baale ha-kabbalah - possessors or masters of the Kabbalah".

The Western Esoteric (or Hermetic) Tradition, a precursor to both the neo-Pagan and New Age movements, differs from the Jewish form in being a more admittedly syncretistic system. However it shares many concepts with Jewish Kabbalah.

Hermetic Kabbalah probably reached its peak in the Hermetic Order of the Golden Dawn, a 19th-century organization that was arguably the pinnacle of ceremonial magic (or, depending upon one's position, its ultimate descent into decadence).

Within the Golden Dawn, Kabbalistic principles such as the ten Sephiroth were fused with Greek and Egyptian deities, the Enochian system of angelic magic of John Dee, and certain Eastern (particularly Hindu and Buddhist) concepts within the structure of a Masonic- or Rosicrucian-style esoteric order. Many of the Golden Dawn's rituals were published by the legendary occultist Aleister Crowley and were eventually compiled into book form by Israel Regardie, an author of some note. The credibility of Crowley is inconsistent at best, though, as many of the rituals published were actually manipulated versions.

Crowley made his mark on the use of Kabbalah with several of his writings; of these, perhaps the most illustrative is Liber 777. This book is quite simply a set of tables relating various parts of ceremonial magic and Eastern and Western religion to thirty-two numbers representing the ten spheres and twenty-two paths of the Kabbalistic Tree of Life.

The attitude of syncretism embraced by Hermetic Kabbalists is plainly evident here, as one may simply check the table to see that Chesed "Mercy" - corresponds to Jupiter, Isis, the color blue (on the Queen Scale), Poseidon, Brahma, and amethysts. These associations are not shared with the Jewish Kabbalah.

Although popular within certain groups, especially the Thelemic Orders such as the O.T.O., Crowley is not without critics. Dion Fortune, a fellow initiate of the Golden Dawn, disagreed with Crowley. Samael Aun Weor has many significant works that discuss Kabbalah within many religions, such as the Egyptian, Pagan, and Central American religions, which is summarized in his work The Initiatic Path in the Arcana of Tarot and Kabbalah. 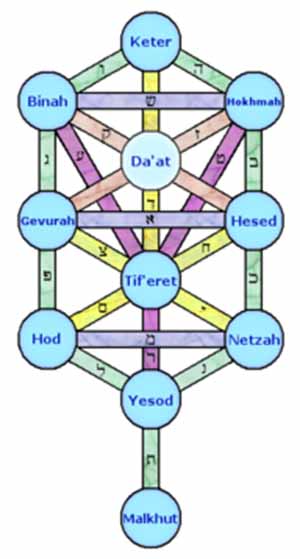