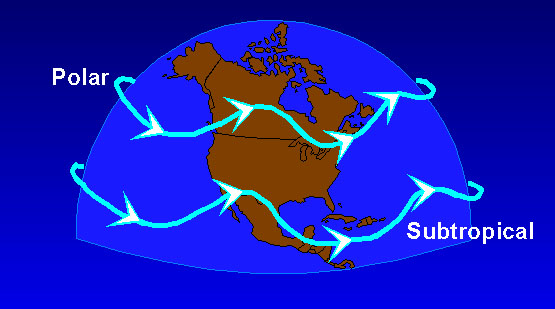 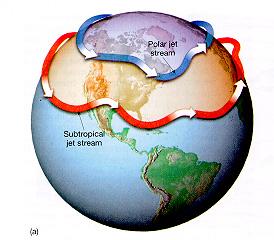 The main jet streams flow from the west in the upper atmosphere.


Jet streams are fast flowing, relatively narrow air currents found in the atmosphere at around 11 kilometres above the surface of the Earth, just under the tropopause. They form at the boundaries of adjacent air masses with significant differences in temperature, such as of the polar region and the warmer air to the south.The major jet streams are westerly winds (flowing west to east) in both the Northern Hemisphere and the Southern Hemisphere; this is due to the Coriolis Effect caused by Earth's rotation. The paths of the flows typically show a meandering shape, and these shapes themselves propagate east, at lower speeds than that of the actual wind within the flow.

Jet streams can be explained as follows. In general, winds are strongest just under the tropopause (except during tornados, hurricanes or other exceptional situations). If two air masses of different temperatures meet, the resulting pressure difference (which causes wind) is highest at those altitudes. If one of the air masses lies north of the other one, then the wind will not flow directly from the hot to the cold area as one would expect, but is deflected by the Coriolis force and flows along the boundary of the two air masses.

The jet streams were first noticed by atmospheric scientists in the 19th century using kites and, later, pilot balloons, but before widespread aviation the so-called "high winds" (or "strong westerlies") were of little interest, and many observers thought that individual observations were simply freak occurrences.

The first scientist to quantify jet streams was Japanese meteorologist Wasaburo Ooishi in the early 1920s by tracking weather balloons at a site near Mount Fuji.

Between 1923 and 1925, Ooishi measured stratospheric westerlies over Japan at consistent speeds in all seasons. Although Ooishi had contacts with the International Meteorological Organization (IMO, now the WMO) and had traveled to Germany and the United States, his published work went largely unnoticed outside of Japan as he chose to write in the international language of Esperanto, which only had a small following in scientific circles, primarily among Asians like Ooishi.

His observations were utilised during World War II by the Japanese military in the fire balloon attacks on the American mainland, although the Japanese scientist on the project, Hidetoshi Arakawa, doubted that Ooishi's measurements could be confidently projected across the entire Pacific Ocean.

In the 1930s, without Ooishi's data, international knowledge of the "high winds" grew slowly.

Evidence suggests the jet stream was at least partially responsible for the widespread drought conditions during the 1930s Dust Bowl in the Midwest United States. Normally, the jet stream flows east over the Gulf of Mexico and turns northward pulling up moisture and dumping rain onto the Great Plains. During the Dust Bowl, the jet stream weakened and changed course traveling farther south than normal. This starved the Great Plains and other areas of the Midwest of rainfall, causing extraordinary drought conditions.

The American aviator Wiley Post, who was interested in the low-friction environment of the stratosphere for increasing aircraft speed and range, worked for several years to perfect a rubber pressure suit. In a flight across Siberia in the late 1920s, Post had flown high to avoid mountains due to poor maps, and had encountered a "strong river of air".

On December 7, 1934, one of his test flights took him above 20,000 feet, where he found a strong tailwind. Because of this, Post has been widely credited with the discovery of the jet stream.

In 1935, IMO member countries in Europe cooperated in an upper atmosphere study that was intended to help with cyclone prediction.

The data show evidence of the jet stream, but were not recognized at the time for what they were. German meteorologist Richard Scherhag summed up the scientific view at the time by asking, "Why is there no front in the upper air?", in part based on the 1935 observations. His colleague H. Seilkopf is credited with the coining of the term "jet stream" in a 1939 paper.

A 1943 Royal Air Force raid on Gironde, France, encountered tailwinds that sped them to their target, but returning the same headwinds, estimated at 380 km/h, caused their aircraft to stall, and the crews were forced to parachute into occupied Vichy France, where they were captured.

In 1947, the Star Dust crash in the Andes Mountains probably resulted from this general ignorance. That same year, the theory of jet streams was explained by Erik Palmen and other members of the Chicago school of dynamical meteorologists, in a groundbreaking paper credited to "Staff members", and by the 1950s was widely accepted.

The location of the jet stream is extremely important for airlines. In the United States and Canada, for example, the time needed to fly east across the continent can be decreased by about 30 minutes if an airplane can fly with the jet stream, or increased by about the same amount if it must fly west against it.

On international flights, the difference is even greater, and it is often actually faster and cheaper flying eastbound along the jet stream rather than taking the shorter great circle route between two points. 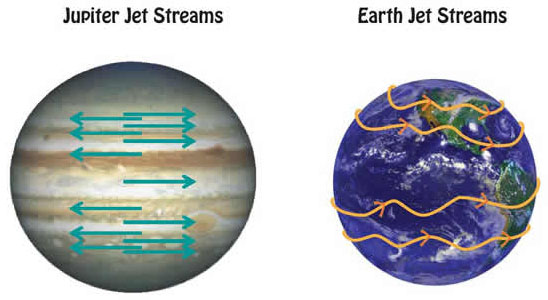 Jupiter's atmosphere has multiple jet streams, caused by the convection cells that form the familiar banded color structure; on Jupiter, these convection cells are driven by internal heating. The factors that control the number of jet streams in a planetary atmosphere is an active area of research in dynamical meteorology. In models, as one increases the planetary radius, holding all other parameters fixed, the number of jet streams increases.