The Spirit of the Jaguar 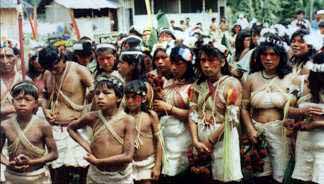 The Huaorani in the Ecuadorian headwaters of the Amazon comprise about 1,500 people who are living in up to 24 temporary settlements in an area of almost 20,000 sq. km, completely covered by rain forest.

They are surrounded by related and alien tribes/ethnic groups with a total population of an estimated 150,000.

For centuries the Huaorani have had to defend themselves against these groups and against gold and rubber prospectors (which provided the missionaries the justification for "pacification".

They speak a language unrelated to any other. Additionally, their pottery designs do not resemble those of their past or present neighbors.

It is only known through their own folklore that they migrated from "down river" a long time ago, "fleeing the cannibals."

They revere the jaguar and call themselves, Huaorani which means "human beings" or "the people," and refer to everyone else as cowode or "non-humans."

The identity of the Huaorani is characterised by their self-sufficient life off and in the forest whose biodiversity is one of the abundant in the world. The Huaorani are practising a sustainable economy, i.e. the natural resources are not over-exerted.

As hunters and gatherers they are semi-nomads. They normally live in their small settlements - surrounded by vegetable gardens in which they grow manioc, maize, peanuts, sweet potatoes, chilli, and fruit. After ten years normally they move on. 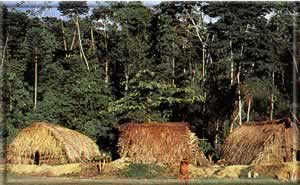 Their respective living quarters consist of decentralised subsettlements which are situated at a distance of a two days walk from each other. To the Huaorani this is a kind of refuge which they use in case of danger or when their resource basis is diminishing.

The egalitarian social system is both a prerequisite for and a consequence of this type of economy. It does not know a permanent "above" and "below" nor does it know discrimination against women. What it does know are the duties/obligations of the individual for the livelihood and survival of the whole community.

Leadership is assumed only in certain situations and for a short period. Once the prevailing problem is solved, leadership is relinquished. In order to secure the survival of the community there is, apart from monogamy, also polygyny and polyandry - in case the gender-ratio is not well-balanced.

Up until the four decades ago the Huaorani still used stone axes and maintained a thoroughly traditional hunter and gather lifestyle in their extremely isolated and monkey-rich rainforest haven. 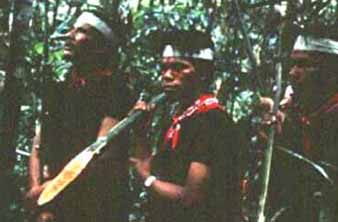 However, in the 1950's all of this changed. First the missionaries came. Then concomitant with the global demand for oil came the demand to find new oil reserves, and as fate has it the world's 1,200 Huaorani live right on top of one of Ecuador's biggest oil deposits. Since this discovery, the Huaorani have been forced to deal with the encroachment of oil companies and cowode on the land they have called home for at least a millennia.

However, like indigenous people all over the world who learn that they have natural resources other nations want, they are forced by those who make the rules to adapt as best they can to changing realities.

One Huaorani clan, the Tagaeri, has moved deeper in the forest to shun all contact with the outside world.

Other Huaorani communities have adopted ecotourism as a way to maintain control over their land, culture and resources.

Even worse is the habit to deposit polluted oil in 600 to 1,000 open basins which are not insulated. The water pollution is disastrous. People living near the lower parts of the rivers are suffering from skin diseases, loss of hair, soar throats, diarrhoea and illnesses that were unknown to them before. And all this in addition to the diseases which were brought into the area by missionaries, oil workers, colonialists and the first tourists, and against which the indigenous people are not immune and for which they have no natural remedies.

They can either afford the long way to the hospital in Puyo, Coca and Quito where they have to pay for their treatment or else they suffer and die from these diseases. Only very few people can afford outside treatment, and therefore about half of the population of the Huaorani died in the sixties. Now and again there are accidents caused by the dynamite left behind, which is normally used for seismic research in prospecting for oil reserves.

Encouraged by the government up to the early nineties, people have settled along these roads. The area occupied, i.e. 4 km right and left of the road, was given to them free of cost. To cultivate coffee or do cattle breeding - both of which is totally unsuitable for the thin layer of humus in the tropical rain forest - they clear the land and sell the timber. Once the soil is exhausted they move on and clear other areas. There are no government controls.

The indigenous people who are thus alienated from their traditional way of life are confronted with a destruction of resources, cut-throat capitalism, alcohol and prostitution. Western curricula, teaching "with a carrot and a stick" (whereas corporal punishment among the Huaorani culture is unheard of), hierarchical thinking and acting, deriding of their forest life through the state and the missionaries - all this increasingly leads to some kind of deculturisation. Their way of living is defamed as communism and barbarism inspired by the devil. Resistance in the form of associations and umbrella organisations is broken up by infiltrating their organisations and by weakening the membership and communities supporting these organisations according to the principle divide et impera.

The Huaorani do not get any compensation for the loss of their land, for the damage to their health and they get no share of the income from oil and timber production. A Huaorani once said: "We are confronted with problems from all sides... We have to protect ourselves until we reach the forest where we are safe." But a majority of the Huaorani is prepared - literally and figuratively - "to attack with spears from all sides", exactly the way they have always done when their way of life was threatened.

Since 1990 the Huaorani territory (i.e. the 6,100 sq. km) has the legal status of a "homeland", a "reserva", which gives the Huaorani a guarantee to maintain their way of life. But since the use of the subsurface is reserved to the state, the Huaorani have no say with regard to the exploitation of oil. In fact, the law also stipulates that any opposition towards oil exploitation is sanctioned with the loss of the homeland status. With the assistance of local lawyers, local and international non-government organisations the Huaorani are trying to pinpoint the contradiction - oil exploitation is just not possible without massive surface interventions - and to force the oil companies to repair the damage as well as to obstruct new prospecting and drilling of boreholes.

Some of the pending charges have not yet been dealt with, others were no longer pursued. One of these is the Sierra Club Legal Defence Fund (USA) whose charge was for genocide, and was later changed for ethnocide (destruction of culture and ethnicity of a people) and which was submitted to the UN Commission on Human Rights. Even if they have been the losers so far from the legal point of view, they are increasingly on the winning side from the perspective of morality. This can be seen from the large circle of friends in Quito and abroad (mainly in the USA, a country which holds in the same time the largest share in oil exploitation). This circle of friends has been trying to attract the attention on the situation of the Huaorani through innumerable actions, press reports and radio and TV features.