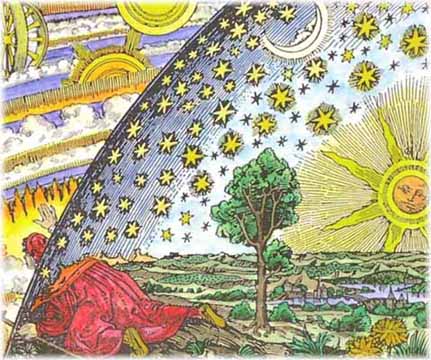 Gnosticism, is a philosophical and religious movement prominent in the Greco-Roman world in the 2nd century AD.

While Gnosticism drew from and influenced in turn many traditional religions, its effect was most clearly felt on nascent Christianity, in which it led to the formation of the canon, creed, and episcopal organization.

The designation Gnosticism, derived from the Greek gnostikos (one who has gnosis, or "secret knowledge"), is a term of modern scholarship. Evidence for the Gnostic phenomenon, found in the Church Fathers who opposed Gnostic teachings (Irenaeus, c. 185; Hippolytus, c. 230; Epiphanius, c. 375) and in the Gnostic writings themselves, reveals a diversity in theology, ethics, and ritual that defies strict classification.

Yet Gnostic sects appear to have shared an emphasis on the redemptive power of esoteric knowledge, acquired not by learning or empirical observation but by divine revelation.

The origins of the Gnostic world view have been sought by scholars in the dualism of Iranian religion, the allegorical Idealism of the Middle Platonic philosophers, and the apocalypticism of certain Jewish mystics.

There are analogies also with Egyptian and Mesopotamian thought. It was only with the rise of Christianity, however, that Gnostic syncretism came to full expression.

The first Gnostic about whom something can be said with confidence is Simon Magus, a 1st-century Jewish heterodox teacher who introduced the fundamental Gnostic conception that evil resulted from a break within the Godhead.

But Simon's gnosis remained essentially Jewish and monotheistic, as did that of the Gnostic circles to which later parts of the New Testament allude.

The dualistic phase was reached after the expansion of Gnosticism into the Hellenistic world and under the influence of Platonic philosophy, from which was borrowed the doctrine that a lower demiurge was responsible for the creation of this world.

This teaching is to be found in the Apocryphon of John (early 2nd century) and other documents of popular gnosis discovered near Naj' Hammadi in upper Egypt in the 1940s and in the Pistis Sophia, a 3rd-century Gnostic work in Coptic belonging to the same school.

The learned gnosis of Valentinus, Basilides, and their schools presupposes this popular gnosis, which, however, has been thoroughly Hellenized and Christianized and sometimes comes very near to the views of Middle Platonism.

Eastern Gnosticism took a somewhat different course. Under the influence of traditional Iranian religion, the semi-Gnostic Manichaeism developed an absolute cosmic dualism between soul and matter.

Moreover, it showed the enormous influence of Syrian asceticism, but it was equally rooted in popular Gnosticism and preserved its essential doctrines.

In the Gnostic view, the unconscious self of man is consubstantial with the Godhead, but because of a tragic fall it is thrown into a world that is completely alien to its real being.

Through revelation from above, man becomes conscious of his origin, essence, and transcedant destiny. Gnostic revelation is to be distinguished both from philosophical enlightenment, because it cannot be acquired by the forces of reason, and from Christian revelation, because it is not rooted in history and transmitted by Scripture.

It is rather the intuition of the mystery of the self.

The world, produced from evil matter and possessed by evil demons, cannot be a creation of a good God; it is mostly conceived of as an illusion, or an abortion, dominated by Yahweh, the Jewish demiurge, whose creation and history are depreciated.

This world is therefore alien to God, who is for the Gnostics depth and silence, beyond any name or predicate, the absolute, the source of good spirits who together form the pleroma, or realm of light.

These conceptions are expressed in various myths, which employ material from many traditional religions but serve to express a basic experience that is new, the discovery of the unconscious self or spirit in man which sleeps in him until awakened by the Saviour.

The Gnostic sects of the 2nd century made use of Hebrew and Christian religious writings, employing the allegorical method to extricate Gnostic meanings from them.

Most Gnostic groups seem to have been organized as schools, in which the authoritative teaching was transmitted, interpreted, and kept secret.

There was wide disagreement among groups as to the importance of rites, with some practicing quasi-Christian Eucharists and baptisms and others rejecting all aspects of conventional worship, including prayer, fasting, and almsgiving.

The development of Christian doctrine was to a large extent a reaction against Gnosticism. The formulation of creedal symbols, the canonization of the New Testament Scriptures, and the emphasis on episcopal authority all were made necessary by the Gnostics' claims.

Moreover, in some measure the Gnostics were the first theologians, and their systems prompted the systemization of early Christian thought.

In addition, they kept alive the great issues of freedom, redemption, and grace, which for a time lost their emphasis among Christian writers. In a later period, the theology of Augustine owed a great deal to his early experience as a Manichaean. Gnosticism