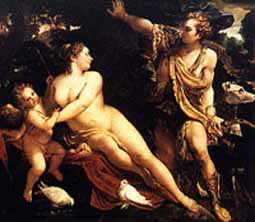 
Adonis - Phoenecian/Syrian god who was adopted by the Greeks as well. A vegetative resurrecting god.

Ala (Nigeria) One face of the Mother Goddess. She was the ruler of the Underworld, protectress of the harvest, and fertility of both animals and man.

Aphrodite (Greece) Goddess of love, beauty, and sexual passion. She represented the fertility through the act of sexual intercourse.

Arianrhod (Wales) One face of the Mother Goddess. She was associated with fertility, reincarnation, and beauty. Ashur (Assyria) One of the national gods of Assyria. He was the god of both war and fertility, both bringing life and taking it away. Ashur was the husband of Ishtar.

Attis- Phrygian god adopted by the Greeks. He was tied with a fertility cult through his mother. Product of a virgin birth.

Baal (Canaan) Early references state that Baal was married to the fertility goddess Baalat but eventually took on her associations and functions as a fertility god - widely venerated throughout the Fertile Crescent and the Middle East.

Bast (Egypt) Bast was the cat headed goddess. She was associated with both fertility and childbirth.

Bendis (Greece) One of the many goddesses associated with female fertility.

Brigit (Ireland) Brigit was the goddess of home, hearth, feminine aspects, healing, and fertility. She was often seen as an alternate for her mother Dana. This reference reflects the different aspects of the Triple Goddess.

Frigg (Teutonic) Frigg was the Odin's wife (the king of the gods). Frigg protected a man's marriage and made him fertile. Her name was invoked to bring children into a conjugal union.

Freyja (Teutonic) Often confused with Frigg, Freyja was a goddess of sexual activity.

Gefjon (Teutonic) Gefjon was one of Frigg's handmaidens and associated with fertility of both man and the land. Each year, a strip of ground was plowed in her name before the entire field to ensure fertility.

Ghede (Voudoun) The god of both death and fertility. His phallus is said to be carved along a gravedigger's tools.

Haumea (Hawaii) Haumea was identified with her mother Papa (again, a representation of the stages of the Mother Goddess). Haumea was said to be continually reborn, therefore allowing her to continually mate with her offspring.

Inanna - Sumerian goddess of love, fertility and war. Her symbol is the eight-pointed star.

Ishtar - Sumerian and Babylonian goddess of love and fertility. She had a habit of attracting lovers and then killing or maiming them.

Juno Sospita (Roman) One of the many faces of Juno (queen of the gods). Juno Sospita was often called upon by infertile women.

Marduk- The central god in the Babylonian pantheon, patron of the city, which is today located in Iraq. Marduk was god of air, earth, and fertility - supreme leader of the gods after defeating Tiamat - ater known as Bel or Baal.

Mars - Roman fertility god who came to be known as Gradivus, the strider, and the god of war. His symbols were wolf, warpecker, and lance.

Min (Egypt) Often identified with the Greek god Pan, Min was the god of male virility. He is almost always depicted holding a flail in one hand and possessing an erect penis. He is married to the goddess of love and fertility, Quetesh.

Mithras [Mitra]- From Avestan/Old Iranian. A Persian god whose cult flourished through the Roman Empire from about 50 AD. He was on the side of Ahuramazda in the Persian pantheon against Ahriman. Product of a virgin birth.

Mylitta - Babylonian and Assyrian goddess of fertility and childbirth.

Nanshe - Goddess of fertility and water, she was the patron of dreams and prophecy.

Osiris (Egypt) Although he wasn't a direct fertility god, Osiris was a god of reincarnation, a form of fertility. His wife, Isis, reconstructed his dead body after it was dismember by his evil brother Set. Isis reanimated the body long enough to become pregnant.

Pan (Greece) Greek god of nature, Pan is known for his sexual and lustful urges. He represents male virility.

Quetesh (Egypt) Husband of Min, she is the love and fertility goddess.

Sulpa'e - God of fertility, wild animals and the planet Jupiter.

Tammuz [Fammuz] - Sumerian/Akkadian god of fertility who died and was resurrected. Mentioned in Ezekiel 8:14. The Phoenecians lived in what is today Lebanon. Product of a virgin birth.

Venus (Roman) Roman equivalent to Aphrodite. Venus was the goddess of love, beauty, sexuality, and fertility.

Xipe Totöc (Aztec) "Our Lord of the Flayed One". A phallic fertility god who was seen worshipped by those living on the Pacific coasts.

Belet-Ili - Sumerian goddess of the womb

Hathor (Egypt) Hathor was the protectress of woman and pregnancy. She was sometimes also considered, in some areas, a midwife. Hathor was most often depicted as a cow and she was said to have nourished the mortals with her milk.

Hera (Greece) The Queen of the gods, Hera presided over all things feminine. She was specifically interested in those things dealing with maternity and marriage.

Ixchel (Maya) Ixchel had a disastrous side, as she was the goddess of sending floods and tropical cloud bursts, however, she was generally view as ruling childbirth, lunar cycles, and pregnancy.

Juno Lucina (Roman) Another face of Juno, Juno Lucina had a duel role. She protected pregnant woman as well as at birth, bringing the child into the light.

Pukkeenegak (Eskimo) Feminine goddess who was supposed to give children to the Eskimo women.

Uma (India) Her primary function was female-ness in all forms, particularly active ones like childbirth. Sri-Laksmi, the Lotus Goddess, should also not be forgotten- although her fertility aspects often get buried in requests for monetary wealth nowadays, her power over fertility and abundance is even older than Uma's, and outstrips her connection with material wealth by a millenia.

Ajysyt (Siberia) Mother Goddess. Her name means "birth giver". She visits every mother among her followers and provides a soul for the newborns.

Artemis (Greece) Although the goddess of chastity, Artemis presides over childbirth because it was said that she caused her mother Leto no pain during delivery.

Bes (Egypt) Bes was primarily a marriage god, but he did preside over the birth of children.

The Hathors (Egypt) "Fairy godmothers" who appeared at birth to bestow blessings to the newborn. They would set the child's destiny. The Hathors consisted of seven to nine young, beautiful women who danced and sang at the birth of a child. The Hathors are said have been created by Hathor herself, as she adopted seven to nine aspects of herself from her role as Mother Goddess.

Heket (Egypt) Wife of Khnum. Heket was associated with Hathor as a birth deity. She was said to be the birth goddess of all creatures.

Ilithyia (Greece) Once viewed as two separate goddesses, Ilithyia was brought together into one. She was the daughter of Hera who freed the child from the mother's womb.

Isis (Egypt) One of the most important female deities, Isis was the protectress of motherhood, healer of the sick, and protectress of women. She also rules magick. Sick with grief concerning the murder of her husband Osiris by his brother Set, Isis reconstructed and reanimated his corpse long enough for it to impregnate her with their only son Horus.

Juno Sospita (Roman) Another responsibility of Juno Sospita was to preside over labor and delivery.

Meskhent (Egypt) Egyptian goddess who presided over the delivery of babies. She was represented as a tile or a brick with a woman's head; the reason being that Egyptian women traditionally gave birth squatting over a brick. She also pronounced judgment over the new child. She was married to Shai who protected the destiny of newborns and children.

Mylitta (Babylon) Mylitta was identified with Aphrodite. She took special interests in the process of childbirth.

Nintur (Sumeria) Another name for the goddess Ninhursaga, the Mother Goddess. Her name means "Lady Who Gives Form". She was represented as a woman holding a midwife's pail of water.

Pi-hsia-yuan-chun (China) Known as the "Princess of Streaked Clouds", she protects women, children, and presides over birth.

Renenet (Egypt) Goddess who presided over a baby's suckling. She bestowed both a name and a personality on a newborn infant.

Serket (Egypt) Serket was the scorpion headed goddess. She often assisted during childbirth and protected the pregnant Isis from her evil brother-in-law Set.

Taueret (Egypt) Goddess of childbirth, Taueret took the form of a pregnant hippopotamus in hopes that her hideous form would scare away any demons after the newborn infant.