The Behistun Inscription is to cuneiform what the Rosetta Stone is to Egyptian hieroglyphs: the document most crucial in the decipherment of a previously lost script. It is located in the Kermanshah Province of Iran.

A British army officer, Sir Henry Rawlinson, had the inscription transcribed in two parts, in 1835 and 1843. Rawlinson was able to translate the Old Persian cuneiform text in 1838, and the Elamite and Babylonian texts were translated by Rawlinson and others after 1843. Babylonian was a later form of Akkadian: both are Semitic languages.

The text of the inscription is a statement by Darius I of Persia, written three times in three different scripts and languages: two languages side by side, Old Persian and Elamite, and Babylonian above them. Darius ruled the Persian Empire from 521 to 486 BC. Some time around 515 BC, he arranged for the inscription of a long tale of his accession in the face of the usurper Smerdis of Persia (and Darius' subsequent successful wars and suppressions of rebellion) to be inscribed into a cliff near the modern town of Bisistun, in the foothills of the Zagros Mountains of Iran, just as one reaches them from the Kermanshah Plain.

The inscription is approximately 15 metres high by 25 metres wide, and 100 metres up a limestone cliff from an ancient road connecting the capitals of Babylonia and Media (Babylon and Ecbatana). It is extremely inaccessible as the mountainside was removed to make the inscription more visible after its completion.

The Old Persian text contains 414 lines in five columns; the Elamite text includes 593 lines in eight columns and the Babylonian text is in 112 lines. The inscription was illustrated by a life-sized bas-relief of Darius, two servants, and ten one-metre figures representing conquered peoples; Faravahar floats above, giving his blessing to the king. One figure appears to have been added after the others were completed, as was (oddly enough) Darius' beard, which is a separate block of stone attached with iron pins and lead.

It is believed that Darius placed the inscription in an inaccessible position to make it tamper-resistant. Readability took second place to this demand: the text is completely illegible from ground level. The Persian king did not account for the creation of a pool of water at the bottom of the cliff, which brought increased human traffic to the area. Considerable damage has been caused to some figures.

The first historical mention of the inscription is by the Greek Ctesias of Cnidus, who noted its existence some time around 400 BC, and mentions a well and a garden beneath the inscription dedicated by Queen Semiramis of Babylon to Zeus (the Greek analogue of Ahura Mazda). Tacitus also mentions it and includes a description of some of the long-lost ancillary monuments at the base of the cliff, including an altar to Hercules. What has been recovered of them, including a statue dedicated in 148 BC, is consistent with Tacitus' description. Diodorus also writes of "Bagistanon" and claims it was inscribed by Queen Semiramis.

After the fall of the Persian Empire and its successors, and the fall of cuneiform writing into disuse, the nature of the inscription was forgotten and fanciful origins became the norm. For centuries, instead of being attributed to Darius - one of the first Persian kings - it was believed to be from the reign of Chosroes II of Persia - one of the last. A legend arose that it had been created by Farhad, a lover of Chosroes' wife, Shirin. Exiled for his transgression, Farhad is given the task of cutting away the mountain to find water; if he succeeds, he will be given permission to marry Shirin. After many years and the removal of half the mountain, he does find water, but is informed by Chosroes that Shirin had died. He goes mad, and throws himself from the cliff. Shirin is not dead, naturally, and hangs herself upon hearing the news.

The inscription was noted by an Arab traveler, Ibn Hawqal, in the mid-900s, who interpreted the figures as a teacher punishing his pupils. It was not until 1598, when the Englishman Robert Sherley saw the inscription during a diplomatic mission to Persia on behalf of Austria, that the inscription first came to the attention of western European scholars. His party came to the conclusion that it was a picture of the ascension of Jesus with an inscription in Greek.

Biblical misinterpretations by Europeans were rife for the next two centuries. French General Gardanne thought it showed Christ and his twelve apostles, and Sir Robert Ker Porter thought it represented the 12 tribes of Israel and Shalmaneser of Assyria. Italian explorer Pietro della Valle visited the inscription in the course of a pilgrimage in around 1621, and German surveyor Carsten Niebuhr visited in around 1764 while exploring Arabia and the middle east for Frederick V of Denmark, publishing a copy of the inscription in the account of his journeys in 1777. Niebuhr's transcriptions were used by Georg Friedrich Grotefend and others in their efforts to decipher the Old Persian cuneiform script. Grotefend had deciphered ten of the 37 symbols of Old Persian by 1802.

In 1835, Sir Henry Rawlinson, a British army officer training the army of the Shah of Iran, began studying the inscription in earnest. As the town of Bisistun's name was anglicized as "Behistun" at this time, the monument became known as the "Behistun Inscription". Despite its inaccessibility, Rawlinson was able to scale the cliff and copy the Old Persian inscription. The Elamite was across a chasm, and the Babylonian four metres above; both were beyond easy reach and were left for later.

Armed with the Persian text, and with about a third of the syllabary made available to him by the work of Grotefend, Rawlinson set to work on deciphering the text. Fortunately, the first section of this text contained a list of Persian kings identical to that found in Herodotus, and by matching the names and the characters, Rawlinson was able to crack the form of cuneiform used for Old Persian by 1838 and present his results to the Royal Asiatic Society in London and the Societe Asiatique in Paris.

Next came the remaining two texts. After a stretch of service in Afghanistan, Rawlinson returned in 1843. Using planks he crossed the gap between the Old Persian text and the Elamite, and copied that. He was then able to find an enterprising local boy to climb up a crack in the cliff and rig ropes across the Babylonian writing, so that papier-mache casts of it could be taken. Rawlinson set to work and translated the Babylonian writing and language, working independently of Edward Hincks, Julius Oppert and William Henry Fox Talbot, who also contributed to the decipherment; Edwin Norris and others were the first to do the same for the Elamite. As three of the primary languages of Mesopotamia, and three variations of the cuneiform script, these decipherments were one of the keys to putting Assyriology on a modern footing.

For students of the Lost Tribes of Israel, the inscription has provided an invaluable missing link. George Rawlinson, Sir Henry Rawlinson's younger brother, connected the Saka/Gimiri of the Behistun Inscription with deported Israelites:

"We have reasonable grounds for regarding the Gimirri, or Cimmerians, who first appeared on the confines of Assyria and Media in the seventh century B.C., and the Sacae of the Behistun Rock, nearly two centuries later, as identical with the Beth-Khumree of Samaria, or the Ten Tribes of the House of Israel." - George Rawlinson, note in his translation of History of Herodotus, Book VII, p. 378

The inscription connects the people known in Old Persian and Elamite as Saka, Sacae or Scythian with the people known in Babylonian as Gimirri or Cimmerian. This is important because the Assyrian's referred to the Northern Kingdom of Israel in their records as the "House of Khumri", named after Israel's King Omri of the 8th century BCE. Phonetically "Khumri", "Omri", and "Gimiri" are similar.

Cyrus the Great - 2,5OO years ago - Persian Empire. One of the important source for the history of Cyrus is the cuneiform writing on the Cylinder of Cyrus (above) discovered during excavations at Babylon which Cyrus entered in 539 B.C. In this written message to the Babylonians, dated 538-529 B.C., Cyrus declared: "I (am) Cyrus, thie king of the world, the king of Babylon, the king of Shumer and Akkad, the king of the four regions . . . When I entered Tintar (ancient name of Babylon) peacefully . . . I established my sovereignty in the palace of the princes, Marduk (the Babylonian national god) inclined the noble hearts of the people of Babylon towards me, for I was daily attentive to his worship . . ." Cyrus did in fact scrupulously respect the Babylonian religions and repaired the temples . In 539 B.C. he authorized the return to Palestine of the jews deported by Nebuchadrezzar and arrange for the rebuiidir'g of the Hebrew temple in Jerusalem. 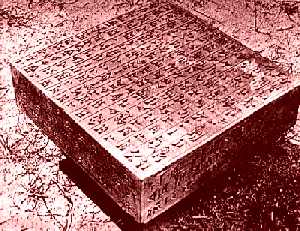 The ruins of ancient Susa, administrative capital of Darius I and his successors, probed and uncovered by archaeologists since 1884. have yielded a rich harvest of historical remains and artifacts. But in 1970 the Palace of Darius had yet another surprise in store for the archaeologist.

A French mission, in collaboration with Iran's Service for the Protection of Historic Monuments, was excavating the foundations of the palace walls, a preliminary to their partial restoration, when they came across two stone tablets inscribed with cuneiform characters. As they soon realized, they had discovered the stones inscribed with the charter of the foundation of the palace of Darlus, placed beneath the walls at the end of the 6th century B.C.

The tablets of grey marble, in a perfect state of preservation. were engraved on their six sides. The one placed under the east wall of a corridor bore a text in Akkadian an ancient language of Mesopotamia. used in cuneiform writing from about the 28th to the 1st century B.C. (photo right). The second, recovered from beneath the west wall, was inscribed in Elamite (the language ol Elam. an ancient country to the east of Babylon). It is probable that a third tablet with an inscription in ancient Persian - the third official language of the Empire- was also placed in the foundations.

Not only has the discovery brought to light a new text dating from the Achaemenid epoch with in the Elamite text, a dozen new words to add to the lexicon of this language. It has also given to a millimetre the length of the royal cubit under Darius (33.60 cm.). and has confirmed beyond all doubt that the section of the palace where the finds were made was the work of Darius.

Cyrus Cylinder is an artifact of the Persian Empire, consisting of a declaration inscribed in Babylonian cuneiform on a clay barrel. Upon his taking of Babylon, Cyrus the Great issued the declaration, containing an account of his victories and merciful acts, as well as a documentation of his royal lineage. It was discovered in 1879 by A. H. Rassam in the Marduk temple of Babylon, and today is kept in the British Museum. The declaration is sometimes described as the "first charter of human rights", mainly due to the mention of Babylonian slaves being freed. In fact, the declaration reflects a much earlier Mesopotamian tradition where new reigns were inaugurated with declarations of reforms. A replica of the cylinder is kept at the United Nations Headquarters in New York City.