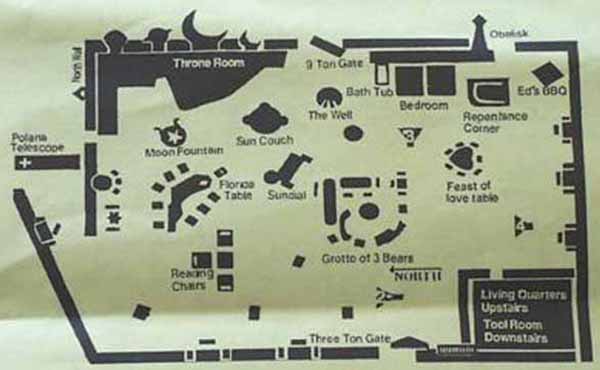 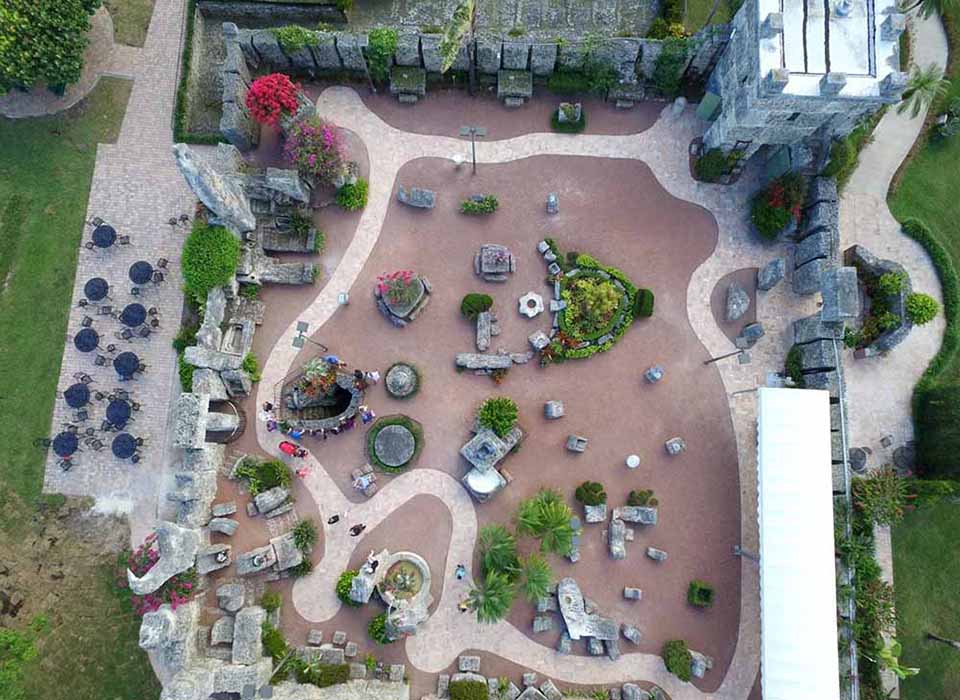 Did Edward Leedskalnin use the power of sound waves to defy gravity?

What other acoustic applications are involved in humanity's history?

Many ancient structures were not built with sound but to make sound.


A series of concentric coral circles is said to represent the solar system. 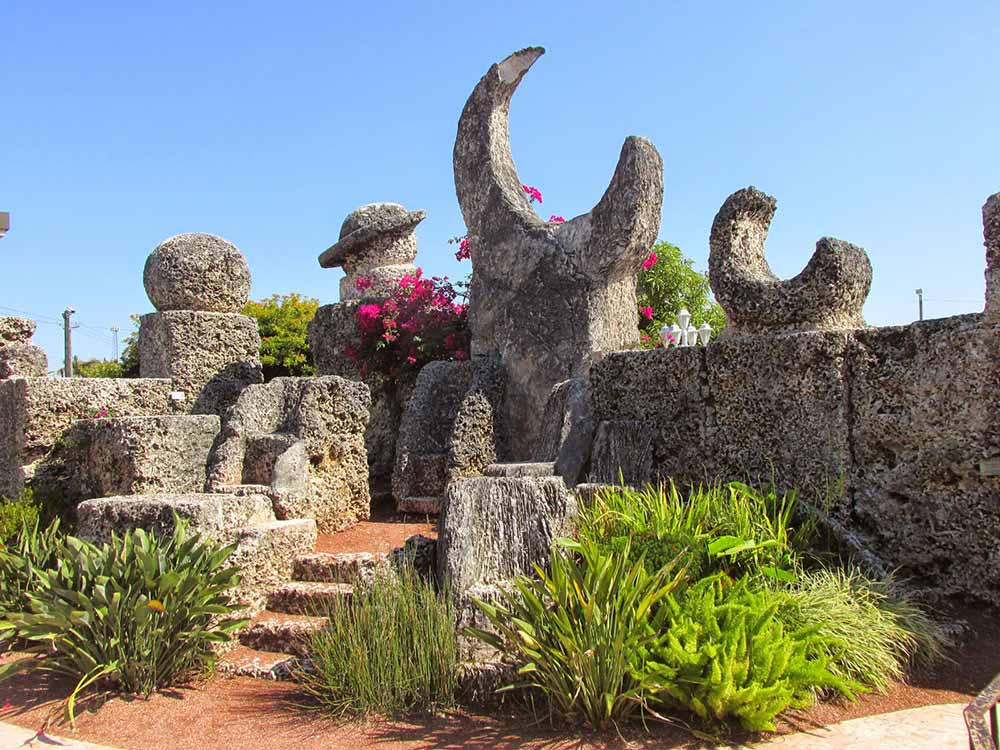 Nearby stand Mars, which he believed sustained life, and Saturn


This 30 ton telescope, towering twenty five feet above the complex, 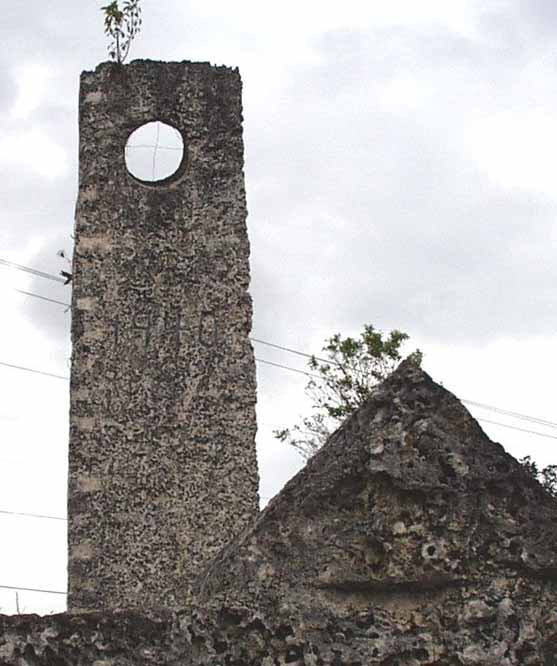 is perfectly aligned to the North Star. 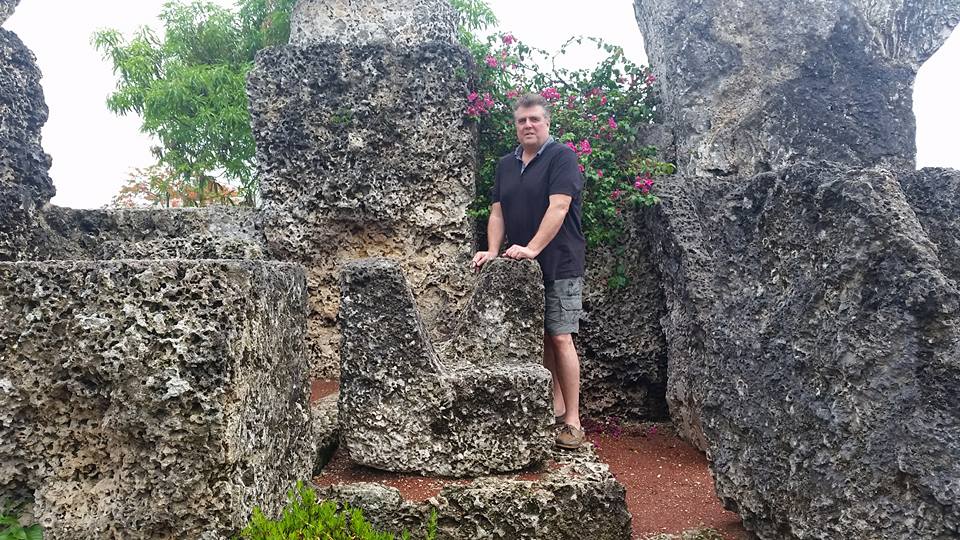 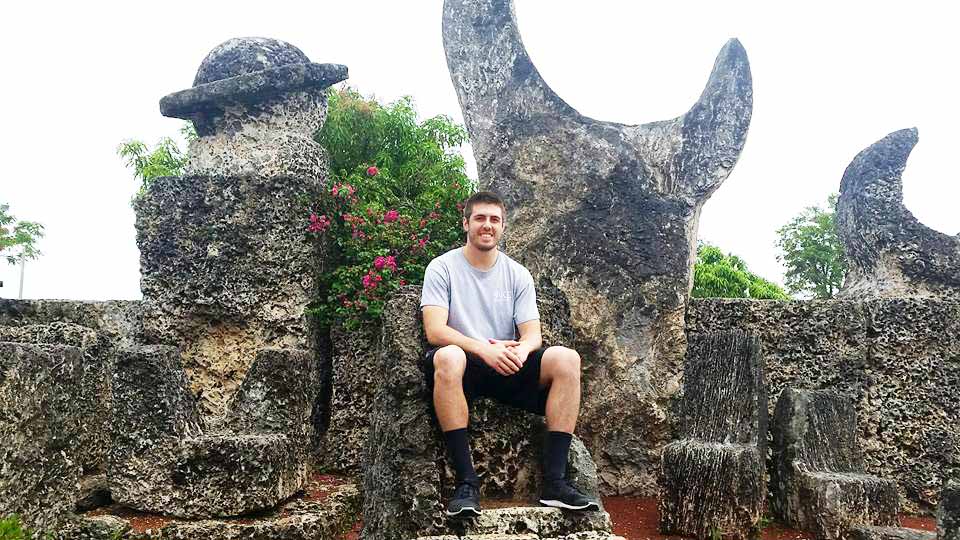 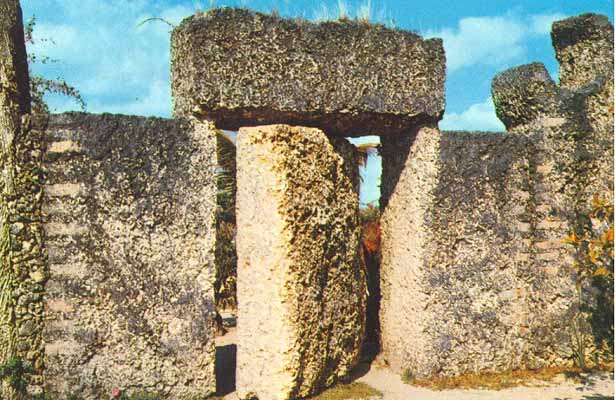 Entrance to Coral Castle is made through a gate fashioned from a single coral block weighing nine tons. This miraculous monolith is approximately 80 inches wide, 92 inches tall, and 21 inches thick. It fits within a quarter of an inch of the walls on either side and pivots through an iron rod resting on an automobile gear. The enormous block balances so perfectly on its center of gravity that a visitor can easily push it open with one finger. People who are sensitive to electromagnetic energies fields will sometimes report headaches while standing inside the archway of the nine-ton swinging gate - door - thought to be over a vortex - and a major grid point of the planet. 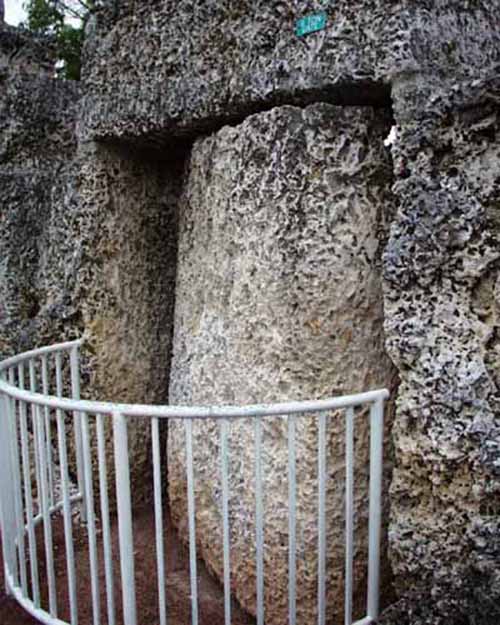 Does the door across from the one above represent a gate to another dimension? 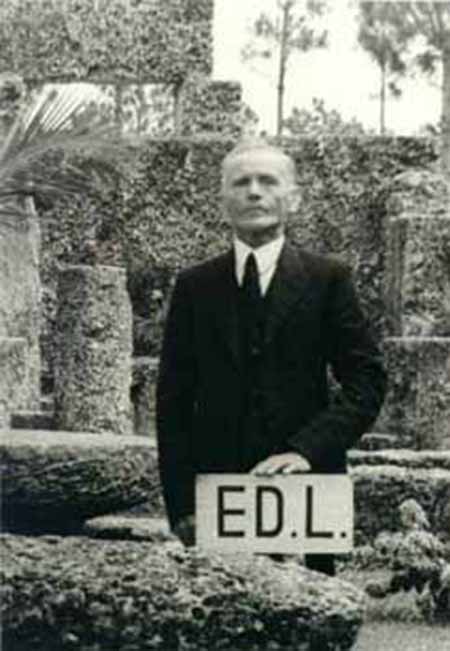 Coral Castle is an oolite limestone structure created by the Latvian American eccentric Edward Leedskalnin (1887-1951) located in Leisure City, Florida, in Miami-Dade County at the intersection of South Dixie Highway (U.S. 1) and SW 157th Avenue. The structure comprises numerous megalithic stones (mostly limestone formed from coral), each weighing several tons. It is currently a privately operated tourist attraction. Coral Castle is noted for legends surrounding its creation that claim it was built single-handedly by Leedskalnin using reverse magnetism or supernatural abilities to move and carve numerous stones weighing many tons.

Coral Castle was built in the early 20th century by an eccentric Latvian recluse named Edward Leedskalnin who allegedly left Latvia when he was rejected by his 16 year old fiance. He would never marry and would spend 30 years of his life building a Coral Castle and its surrounding buildings, for his alleged 'Sweet Sixteen'. Leaving for America, he came down with terminal tuberculosis. He allegedly spontaneously healed, stating that magnets had some effect on his healing.

Leedskalnin was a 100 pound 5-foot tall man who wound up in Homestead, Florida on a ten-acre tract of land just south of Miami, Florida. Somehow he allegedly managed to single-handedly lift and maneuver blocks of megalithic stones, mostly coral, weighing up to 30 tons each, to create not only a castle but other things.

How Leedskalnin worked has never been discovered, though he labored for 30 years. The veracity of his doing this alone is impossible to prove because he worked at night, hidden from the eyes of observers. He seemed to know when he was being watched. On those occasions he wouldn't lifted the stones and stopped working. 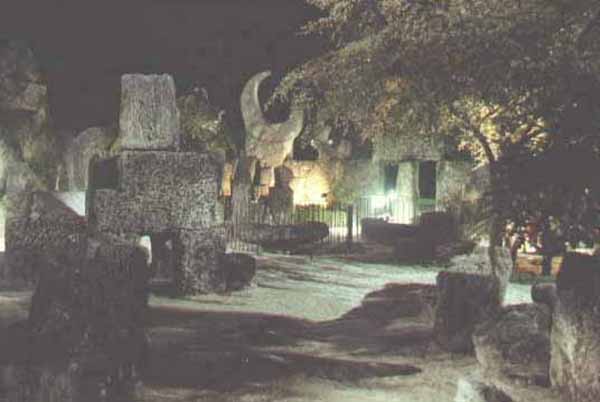 Some suggest Leedskalnin used a form of antigravity device to build the castle. Numerous designs have been suggested for this device, some using "harmonic sound waves", some using magnetism, and numerous other proposals. Leedskalnin himself claimed that he knew the "secret" of the ancient Egyptian pyramids, and some allege he used those secrets to assemble the structure. He was quoted as saying, "I have discovered the secrets of the pyramids, and have found out how the Egyptians and the ancient builders in Peru, Yucatan, and Asia, with only primitive tools, raised and set in place blocks of stone weighing many tons." 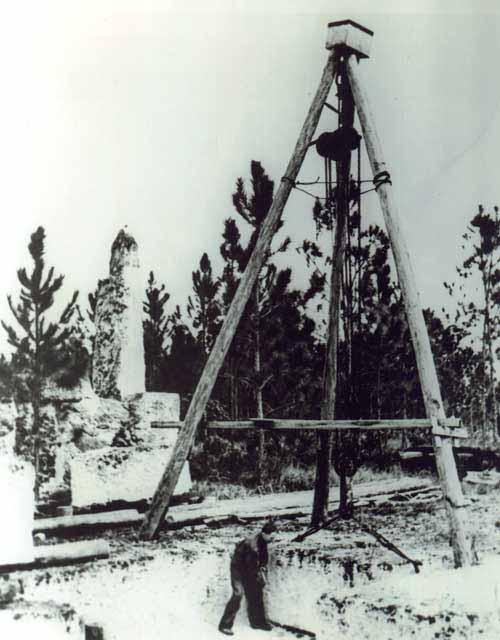 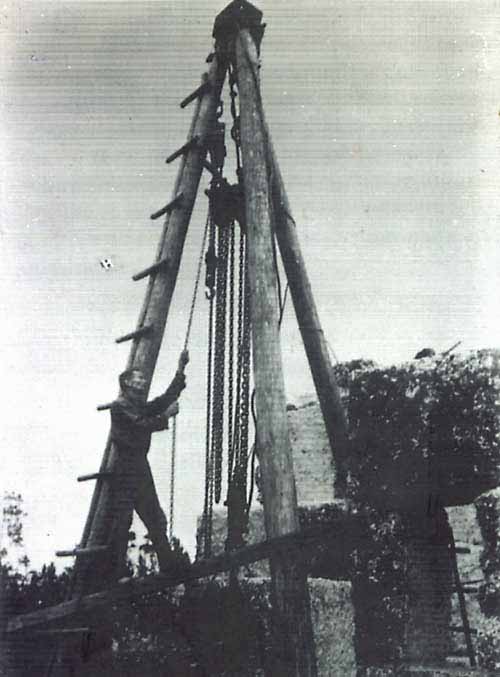 as pictures exist of him constructing the castle with blocks and tackle. 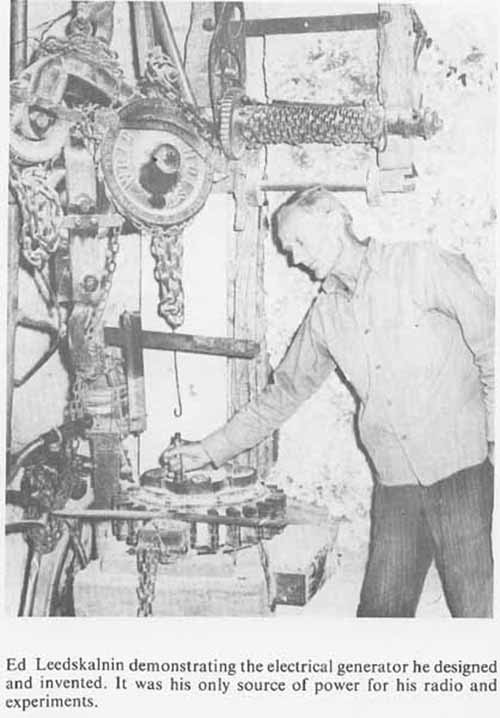 Many of the features of the castle are notable, including a table with a flower planted in the middle. He stated that he wanted the table to have flowers on it every day of the year. There are also machines to tell time, home-made air conditioners and other electrical devices, as well as a nine-ton revolving door that is so well-balanced that a child could open it with the push of a single finger. 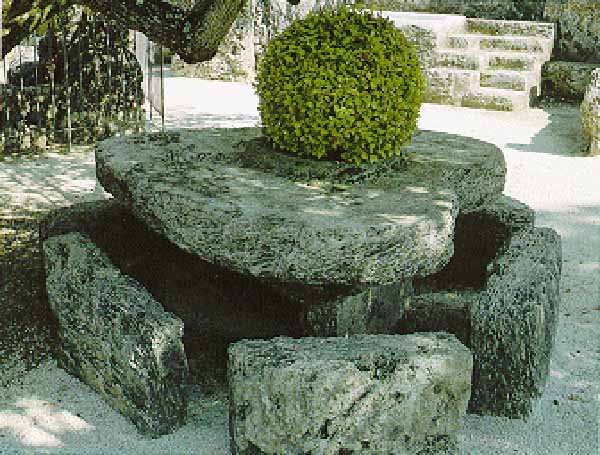 Leedskalnin was a student of the universe.
Much of the Coral Castle site is calibrated to celestial alignments. 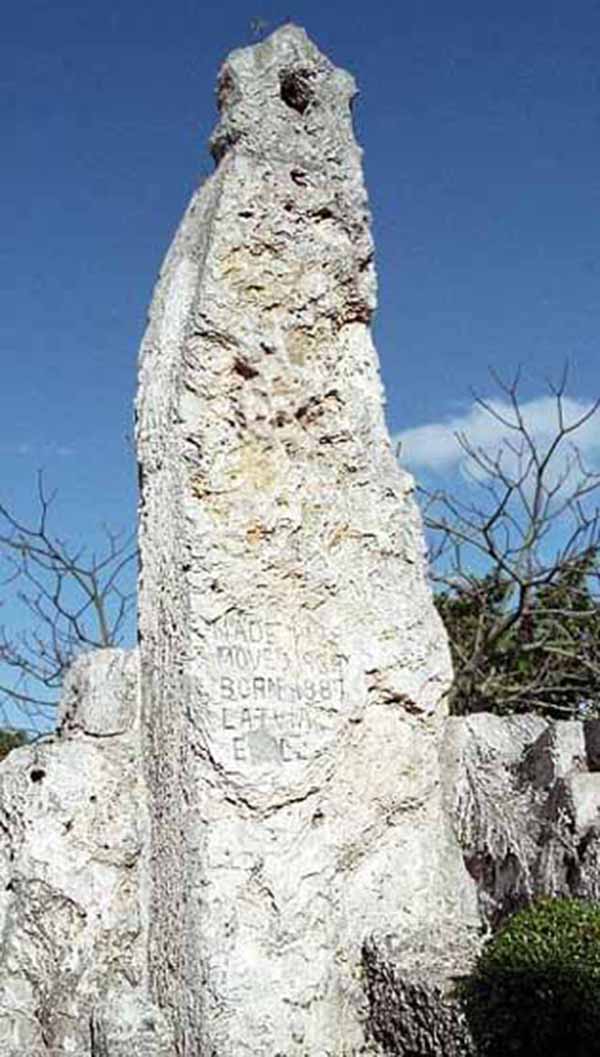 A 22-ton obelisk stretches 40 feet toward the sky. 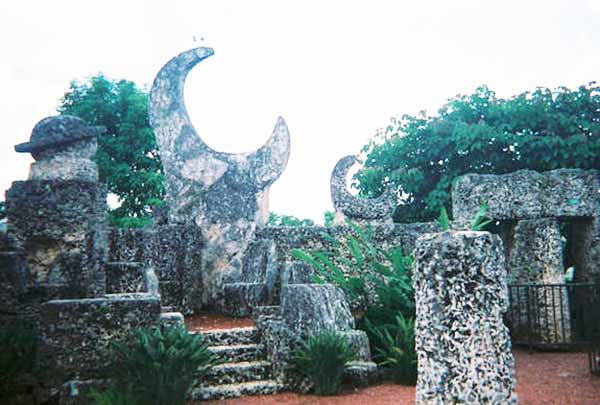 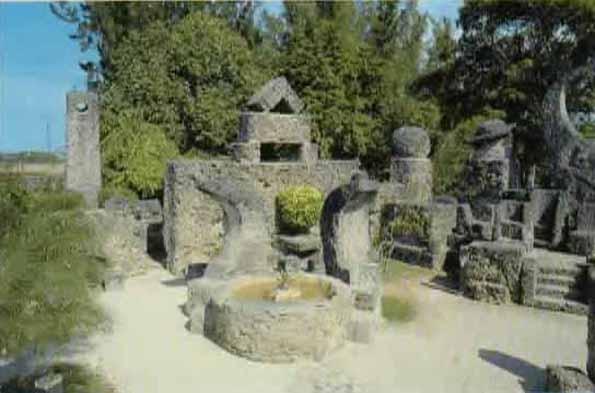 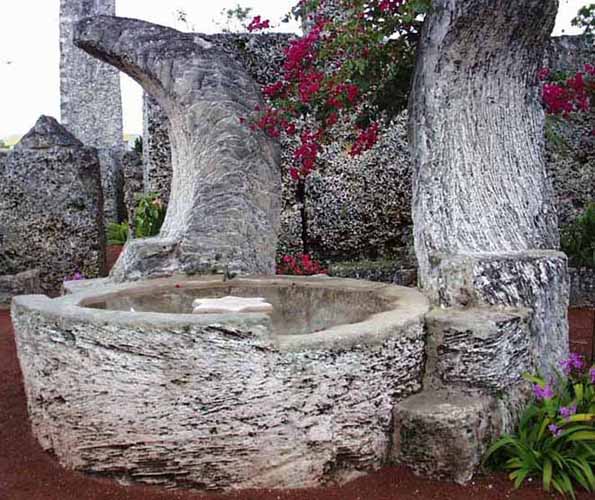 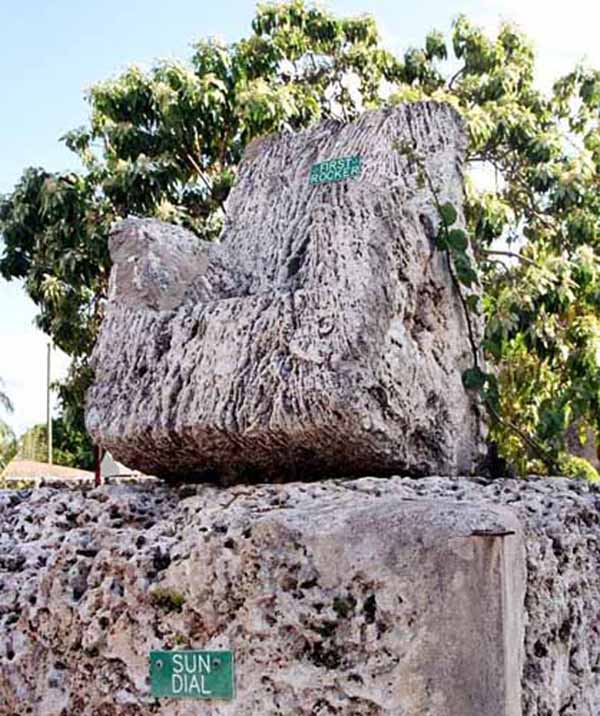 Rocking Chair and Sundial
Sundial, calibrated to noon of the Winter and Summer Solstice,
is so accurate it tells time within two minutes. 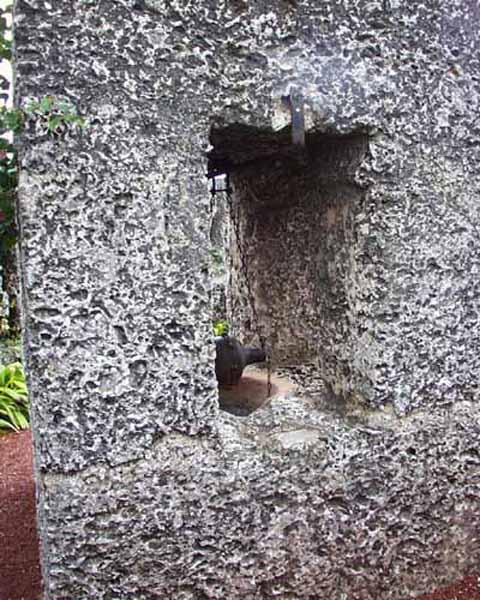 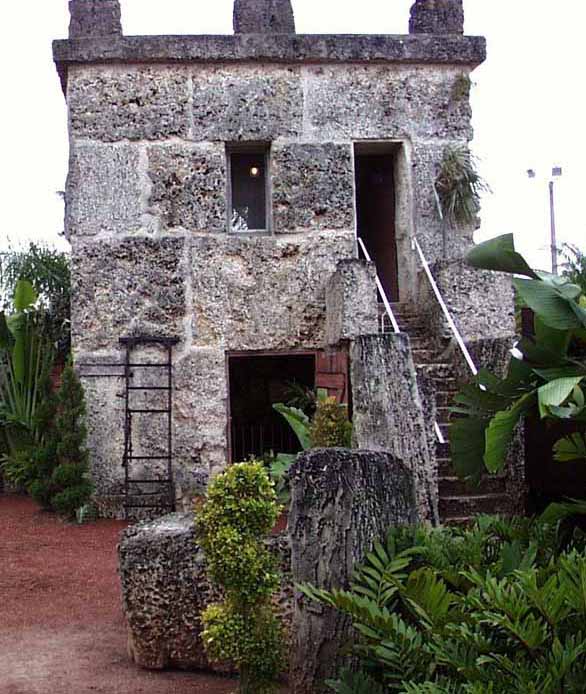 An air of mystery surrounded his two story monolith, known as The Tower, which housed his workshop and living quarters which no one was permitted to enter. It is located just inside the courtyard, to the immediate right. Inside is a flight of stone steps ascending to a single doorway near the top. It leads to the highest point in the area and a small room. This chamber is occupied only by a leather hammock and a crude wooden table piled with primitive tools - chains, saws, many kinds of drills, wedges, hammers, chisels and crowbars. Tools also festoon the walls. This imposing tower was raised with approximately 243 tons of coral cut into cyclopean blocks weighing from four to nine tons each.

Edward Leedskalnin disputed contemporary science and believed all matter consisted of magnets which could produce measurable phenomena, and electricity. Ed would say he had rediscovered the laws of weight, measurement, and leverage" and that these concepts involved the relationship of the Earth to celestial alignments. He claimed to see beads of light which he believed to be the physical presence of nature's magnetism and life force, or what we term today, 'Chi'. Many people report that he used harmonics combined with grid energies and celestial alignments to do his work.

'Tibetan Sound Levitation Of Large Stones Witnessed By Scientist'. In his work Diamagnetic Gravity Vortexes, found in the book Anti-Gravity and The World Grid David Hatcher Childress, postulates that the area of South Florida at Coral Castle (considered part of the Bermuda Triangle) is a powerful diamagnetic levitator. Leedskalnin demonstrated magnetism (EM energies), and the mechanism of levitation, by applying the natural Earth Grid principles of diamagnetism. Leedskalnin could levitate huge pieces of coral by using the center of mass for the needed slight, uplift, launching pressure.

Ed Leedskalnin showed every indication of being a natural geomancer - one who senses the unique telluric forces of the Earth. He was highly intuitive, and knew how to observe nature for signs of anomaly. This ultimately led him to the discovery of vortex energy, and the ability to harness the natural elements of magnetism.

He understood the critical nature of identifying the most energetic location to erect his massive Castle, and seemed to have known the secrets of anti-gravity, and its relation to cosmic events. Ed proceeded to develop a means of leverage power generated from the geomagnetic grid, and produced a system to generate anti-gravity waves.

Edward's notebooks are laden with schematics for magnetism, and electrical experiments. Although he possessed only a fourth-grade education, it seems he had discovered a means to reduce the gravitational pull of the earth. He wrote a series of pamphlets which included his theories on magnetism and cosmic force.

Researchers have speculated that Ed learned the secret of levitation, and one theory in particular caught the imagination of many. The planetary grid hypothesis postulates that the earth is covered by an invisible web of energy, which is concentrated at points of telluric power, the convergence of which create unusual phenomena.

These telluric grid dynamics played a vital role in the construction of the Castle, according to author Ray Stoner. In his book The Enigma of Coral Castle, Stoner speculates that the complex was originally moved from Florida City to Homestead, not because of privacy issues (as most historians suggest), but because Ed realized he had made a mathematical error in his original positioning, and moved the entire structure to take advantage of an area with greater telluric force.

In December of 1951 Ed Leedskalnin at age 64 became ill. He put a sign on the door saying 'Going to the Hospital'. He took a bus to Jackson Memorial Hospital in Miami. Three days later he died in his sleep of malnutrition and kidney failure, taking his secrets with him. After his death, $3,500 was found in the tower; his life savings, mostly from land sales.