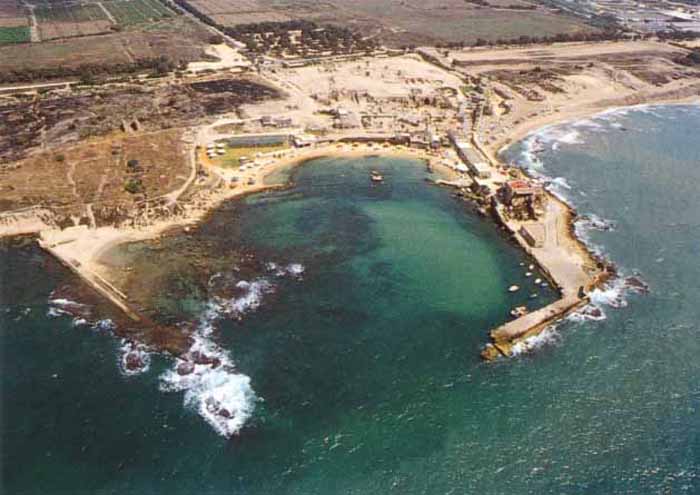 Caesarea is a town in Israel located mid-way between Tel Aviv and Haifa (45 km), on the Israeli coastal plain near the city of Hadera. Modern Caesarea as of December 2007 has a population of 4,500 people. It is the only Israeli locality managed by a private organization, the Caesarea Development Corporation, and also one of the most populous localities not recognized as a local council. It lies under the jurisdiction of the Hof HaCarmel Regional Council.

Caesarea is divided into a number of residential zones, known as clusters. The most recent of these to be constructed is Cluster 13, which, like all the clusters, is given a name: in this case, "The Golf Cluster", due to its close proximity to the Caesarea Golf Course. These neighborhoods are universally affluent, although they vary significantly in terms of average plot size.

Beyond the eastern boundary of the residential area of Caesarea is Highway 2, Israel's main highway linking Tel Aviv to Haifa. Caesarea is linked to the road by the Caesarea Interchange in the south, and Or Akiva Interchange in the center. Slightly further to the east lies Highway 4, providing more local links to Hadera, Binyamina, Zichron Yaakov, and the moshavim and kibbutzim of Emek Hefer. Highway 65 starts at the Caesarea Interchange and runs westwards into the Galilee and the cities of Pardes Hanna-Karkur, Umm al-Fahm, and Afula.

Caesarea shares a railway station with nearby Pardes Hanna-Karkur which is situated in the Caesarea Industrial Zone and is served by the suburban line between Binyamina and Tel Aviv with two trains per hour. The Binyamina Railway Station, a major regional transfer station, is also located nearby.


The modern town of Caesarea follows design leads from the garden suburb movement and is set out as a number of residential clusters established sequentially as the town has developed.

Caesarea was built by Herod the Great around 25-13 BCE as the port city Caesarea Maritima. It served as an administrative center of Judaea Province of the Roman Empire, and later the capital of the Byzantine Palaestina Prima province during the classic period. Following the Arab conquest in the 7th century, the city fell into obscurity until Crusader renovation, but was again abandoned after the Mamluk conquest. It was populated in 1884 by Muslim Bosnyak immigrants, making it a small fishing village.

In 1940, kibbutz Sdot Yam was established on Jewish lands next to the Bosnyak village. During the Civil War in Mandatory Palestine, the town was abandoned by the Bosnyak residents, and in 1952 a Jewish town of Caesarea established near the ruins of the old city, which were made into the national park of Caesarea Maritima. 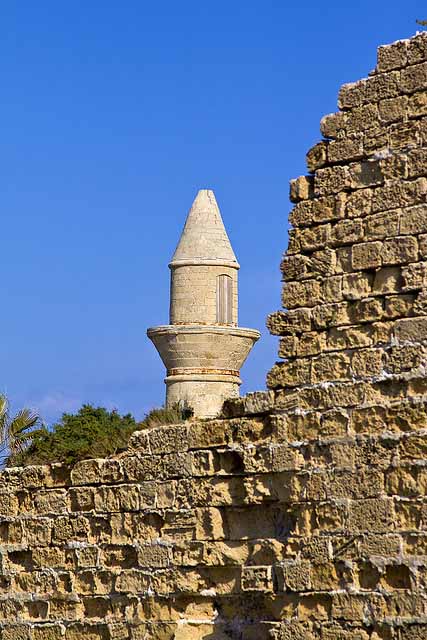 Caesarea is believed to have been built on the ruins of Stratonospyrgos (Straton's Tower), founded by Straton I of Sidon, and was likely an agricultural storehouse in its earliest configuration. In 90 BCE, Alexander Jannaeus captured Straton's Tower as part of his policy of developing the shipbuilding industry and enlarging the Hasmonean kingdom. Straton's Tower remained a Jewish city for two generations, until the area became dominated by the Roman in 63 BCE, when the Romans declared it an autonomous city. The pagan city underwent vast changes under Herod the Great, who renamed it Caesarea in honor of the Roman emperor, Caesar Augustus. 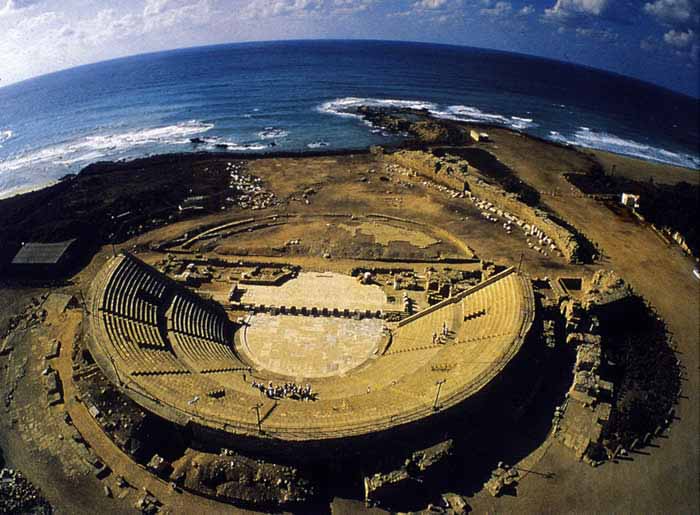 Caesarea also flourished during the Byzantine period. In the 3rd century, Jewish sages exempted the city from Jewish law, or Halakha, as by this time the majority of the inhabitants were non-Jewish. The city was chiefly a commercial centre relying on trade.

The area was only seriously farmed during the Rashidun Caliphate period, apparently until the Crusader conquest in the eleventh century. Over time, the farms were buried under the sands shifting along the shores of the Mediterranean.

According to Petersen, a Great Mosque was seen there in 439H (1047) by Nasir-i-Khusraw. This was converted into the church of St. Peter in Crusader times. A wall, which could belong to this building, has been identified in modern times.

In 1251, Louis IX fortified the city. The French king ordered the construction of high walls (parts of which are still standing) and a deep moat. However, strong walls could not keep out the sultan Baybars, who ordered his troops to scale the walls in several places simultaneously, enabling them to penetrate the city. During the Mamluk area, the ruins of Caesarea Maritima by the Crusader fortress near Caesarea on the Mediterranean coast lay uninhabited.

First in 1664 a settlement is mentioned. It consisted of 100 "Moroccan" families, and 7-8 Jewish ones. In the late 17th century it again declined. Caesarea lay in ruins until the nineteenth century, when the village of Qisarya the Arabic name for Caesarea) was established in 1884 by Bushnaks (Bosnyaks) - Muslim immigrants from Bosnia, who built a small fishing village on the ruins of the Crusader fortress on the coast.

Petersen, visiting the place in 1992, writes that the nineteenth-century houses were built in blocks, generally one storey high (with the exception of the house of the governor.) Some houses on the western side of the village, near the sea, have survived. There were a number of mosques in the village in the nineteenth century, but only one ("The Bosnian mosque") has survived. This mosque, located at the southern end of the city, next to the harbour, is described as a simple stone building with a red-tiled roof and a cylindrical minaret. It was used (in 1992) as a restaurant and as a gift shop. 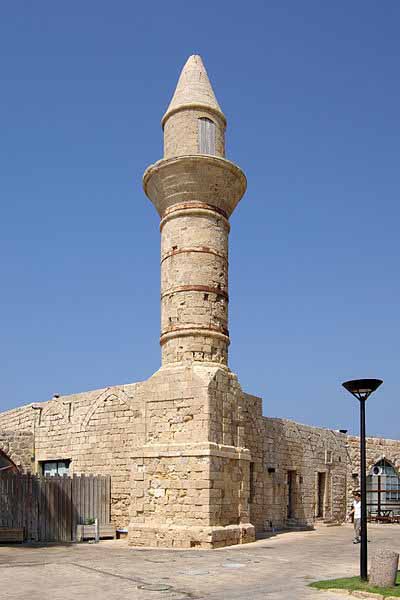 The Jewish kibbutz of Sdot Yam was established 1 kilometre (0.62 mi) south to the Arab town in 1940. The Arab village declined in economic importance and many of Qisarya's Arab inhabitants left in the mid 1940s, when the British extended the Palestine Railways which bypassed the shallow-draft port. Qisarya had a population of 960 in 1945, with Qisarya's population composition 930 Muslims and 30 Christians in 1945.

In 1944/45 a total of 18 dunums of Arab village land was used for citrus and bananas, 1,020 dunums were used for cereals, while 108 dunums were irrigated or used for orchards.

uring the 1948 Arab-Israeli War part of the population of Qisariya fled in fear of attacks, before it was conquered by Jewish forces in February.

In December 1947 the local leader, Tawfiq Kadkuda, had made approaches to Jewish officials in an effort to establish non-belligerency agreements with local Jewish settlements.

The 31 January 1948 Lehi attack on a bus leaving Qisarya, killed 2 and injuring 6 people, precipitated an evacuation of the population, who fled for fear of further attacks, mainly due to romors on events of al-Tantura.Also during February 1948 the 'Arab al Sufsafi and Saidun Bedouin, who inhabited the dunes between Qisarya and Pardes left the area.

According to a testimony collected from Battalion members obtained by Israeli historian Uri Milstein: "In February 1948, the 4th Battalion of Palmach, under the command of Josef Tabenkin, conquered Caesaria." After Haganah's takeover, the remaining inhabitants were expelled and the village houses were demolished.

The Palestinian historian Walid Khalidi described the Bosnyak village remains in 1992: "Most of the houses have been demolished. The site has been excavated in recent years, largely by Italian, American, and Israeli teams, and turned into a tourist area. Most of the few remaining houses are now restaurants, and the village mosque has been converted into a bar." Caesarea