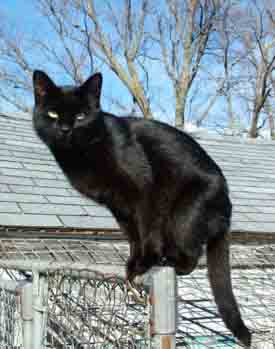 The black cat is a feline whose fur is uniformly black. It is not a particular breed of cat and may be mixed or of a specific breed. The all-black pigmentation is equally prevalent in both male and female cats, and typically skips one generation due to the characteristic's association with the X chromosome. In Western history, black cats have often been looked upon as a symbol of bad omens although they are considered to be good omens in other cultures.

Historically, black cats were symbolically associated with witchcraft and evil. In Hebrew and Babylonian folklore, cats are compared to serpents, coiled on a hearth. Originally in Britain and Europe, a black cat crossing one's path was considered good luck; however they were also seen by the church as associated with witches. This association with witches possibly stems from pre-Christian Europe when witches weren't considered evil. In fact it was the church, who considered them unholy and pagan, who altered their reputation. The black cat was still usually seen as good luck, however in the USA and parts of Europe which were affected by the witch hunts the association with witches caused them to be considered as bad luck. In places which weren't affected particularly by witch hunts, they retained their status as good luck, and are still considered as such in Japan and most of Britain.

Since the 1880s, the color black has been associated with anarchism. The black cat, in an alert, fighting stance was later adopted as an anarchist symbol. More specifically, the black cat is associated with anarcho-syndicalism, a branch of anarchism that focuses on workers' rights. Anarchists, Situationists and Revolutionary Industrial Unionists (such as the IWW) believe that wildcat strikes could be the spark for revolution.

In the 1930s, the Wiccan religious tradition emerged. Since much of Wicca is reconstructed from supposed witchcraft practices, the black cat was adopted as a Wiccan symbol.

The archaic associations of black cats with bad luck or evil once appeared frequently in North American popular culture, but are no longer widely held. In the early years of television, several stations located on "unlucky" channel 13 made sport of the association by using black cats as mascots.

Chicago Cubs fans have a special dislike of black cats. In 1969, while playing the New York Mets at Shea Stadium, a black cat circled around beloved third baseman Ron Santo while he was in the on-deck circle. This unprecedented sign forecast the collapse of the Cubs in the late season and the success of the Mets, which overcame the Cubs eight-game lead in the playoff race to eventually win the division by eight games. Black cats are considered one of the incarnations of the alleged Cubs curse.

Eveready Batteries uses a black cat leaping through the digit 9 as its logo - one of the most recognizable company trademarks.

Cats were often believed to be familiars of human witches. Cats are believed, by some Wiccans, to have the ability to sense the presence of spirits before humans notice them. Black cats, because of their ability to remain unseen in dark places or at night, were considered especially desirable partners for witches. Some witches were purported to have the ability to shape-shift into a cat nine times, hence the archaic belief that cats have "nine lives". Black cats were sometimes used in magical rituals, sometimes as purported participants, other times as sacrifices.

In witch trials, ownership of a cat was often taken as "evidence" of Satanic association and witchcraft. Cats, believed to be evil in their own right, were often punished as well as humans during these trials, often being burned alive.

Both historically and today, some religious and spiritual groups purportedly engage in ritualistic sacrifice of cats, though studies have mainly found that such reports belong squarely in the province of urban legend. Cats are never sacrificed in Wiccan rituals, since Wicca is a nature-oriented religion that encourages respect for animals. Many modern witches keep black cats as pets, and view them as sacred.

In Russia, there is still a popular belief that if a black cat crosses a person's path in the street, that person should either choose a different direction in order to walk around the cat's path or cross it holding a button in his/her fingers (it could be a button on a person's jacket, pants, or shirt).