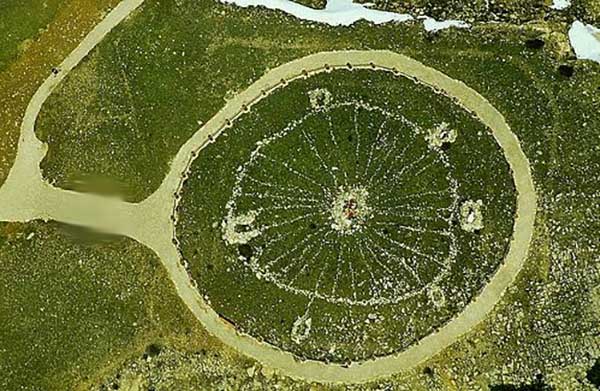 For centuries, the Bighorn Medicine Wheel has been used by Crow youth for fasting and vision quests. Native Americans also go to Bighorn to offer thanks for the creation that sustains them, placing a buffalo skull on the center cairn as a prayer offering. Prayers are offered here for healing, and atonement is made for harm done to others and to Mother Earth. A detailed account of ceremonial use of the Bighorn Medicine Wheel by the Arapaho was related in 1993 by Paul Moss in a landmark of Native American oral tradition.

The structure is located at an altitude of nearly 10,000 feet (3,000 m), near the summit of Medicine Mountain. It is a precolumbian structure, built from roughly loaf-sized stones gathered from the surrounding area. The structure consists of a circular rim, 25 yards (23 m) in diameter, 28 spokes extending from the rim to the center, and a series of seven cairns. Cairn O is at the center of the structure and is almost 10 feet (3.0 m) in diameter. Cairns A - F are at or near the rim, and are considerably smaller. 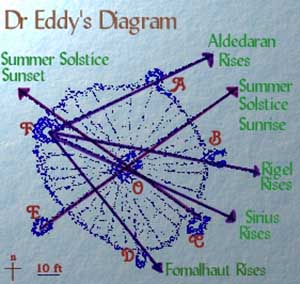 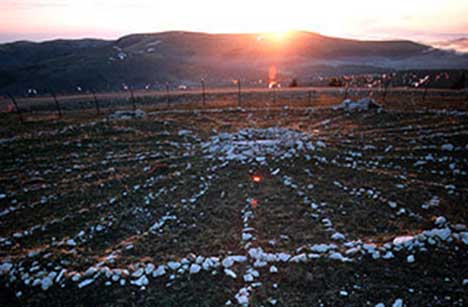 Further, he found that cairn pairs FO, FA, and FB correspond to the rising points of the stars Sirius, Aldebaran, and Rigel, respectively. Observing the first yearly heliacal rising of these stars would have been an effective tool at predicting how many days remained before the summer solstice, as the first heliacal rise of a star occurs on the same date.

Rising positions of stars change very slowly over the centuries, due to the Earth's precession, so the directions of these cairn pairs can be used to project at what date they aligned best with the rising points of these stars. The FA Aldebaran alignment would have worked best between AD 1200 and AD 1700. Further, precession changes the date of first helical rise: Although today the first heliacal rise of Aldebaran is a few days after the summer solstice, between AD 1200 and 1700, the first heliacal rise of Aldebaran would have been just before the summer solstice, allowing an observer to predict the coming of this event.

Astronomer Jack Robinson has further proposed that cairn pair FD was used to observe the rising of the star Fomalhaut, which would have lined up with its rising point between AD 1050 and AD 1450, when Fomalhaut had its first heliacal rise roughly a month before the summer solstice. A carbon date for the Bighorn Medicine Wheel comes from a piece of wood found in cairn F, corresponding to an age of no more than 220 years, roughly in the middle of the 18th century. However, this date can only be considered as a minimum age, as the wood may have become lodged in the cairn after construction.


The Ancient Geology of Medicine Mountain 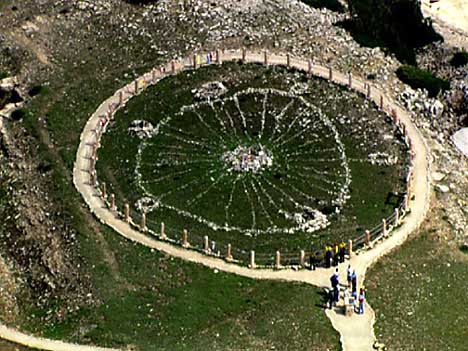 There are 10 places in the world called "nuclei of continents". These are widely separated places of relatively small patches of ancient rocks, first cooled to the molten earth's crust 2-3 billion years old. Overlying younger rock has worn away. These are thought to be the relatively small nuclei first cooled and built up that grew by volcanic activity and sediment accretion into a single huge island (called Gondwanaland) that began to break up in the Carboniferous era (300,000,000 years ago). They separated, drifting on continental plates of ancient rockbed, into our present continents sometime between 65,000,000 and about 1,000,000 years ago (the continental plates continue to drift).

Medicine Mountain is one of these rare ancient continental roots. The cutaway profile shows layers of rock color-coded by age, the youngest lying in the valleys where the Bighorn and Powder Rivers run, and the oldest peaking against the sky, ancient roots down into deepest earth.

The Medicine Wheel looks from the shoulder of the most ancient times down surrounding precipices (that give it nearly a 360Á horizon view) to slopes that get progressively more "modern" until in the valleys on either side are sedimentary rocks deposited in merely the last million to few hundred thousand years. Along the range's spine, this character of most ancient age exposed to the sky is not maintained very far north or south of the Wheel, although the physical appearance of the mountains is the same. Thus the Medicine Wheel floats on a high island of time, the world's oldest rocks, layered in reverse order of the epochs of geological history.

The other continental roots are in Yellow Knife province and a place on the Canadian Shield north of Lake Superior; the Guyana Highland in South America; the Dnieper Plateau in central Europe; Dharwar province in southern India; Guinea, Tanganyika and Rhodesian highlands in Africa; and Southwestern Australia. In none of these other continental root nuclei is there a neat folding-and-wearing of the rock layers in an ordered set peaking by age, such as is found in the Bighorns. Medicine Mountain is a very special place, where the whole geological history of the earth is layered, with the most ancient rocks of all on the peaks, layered through time downhill to the modern valleys where people live. Perhaps this was felt somehow by those who built the Wheel there many centuries ago.

There are some who suggest that the spoke-like structure resembles the "Sun Dance Lodge" or "Medicine Lodge". The Sun Dance Ceremony is a celebration which is part of the fabric of Native American culture and religion.

A contemporary Cheyenne cultural leader stated, "the tribes traditionally went and still do go to the sacred mountain. The people sought the high mountain for prayer. They sought spiritual harmony with the powerful spirits there. Many offerings have been left on this mountain. The center cairn, once occupied by a large buffalo skull, was a place to make prayer offerings. Vision questors would have offered prayers for thanks for plant and animal life that had, and would, sustain them in the future. Prayers of thanks were offered for all of creation. Prayers are made for families and loved ones who are ill. Atonements are made for any offense to Mother Earth. When asking for guidance, prayers for wisdom and strength are always part of this ritual. All of this is done so that spiritual harmony will be our constant companion throughout the year.

A Crow Chief stated that Medicine Wheel was built "before the light came". Other Crow stories say the Sun God dropped it from the sky. And still others say it was built by the "Sheepeaters," a Shoshone band whose name is derived from their expertise at hunting mountain sheep. Many Crow feel it is a guide for building tipis. Some explain the wheel was built by "people without iron."

One Crow story speaks of a man named Scarface. He was handsome and was fond of strutting in his finery before young women. One day while entering his mother's tipi, he fell into the fire which severely burned his face and was thereafter embarrassed to be seen. Shamed at his appearance, he left his people and went to live in the mountains. Scarface lived alone for many years.

One day while a young woman and her grandmother were hunting berries, they became separated from their people and couldn't find their way back. They traveled along a trail which took them into the mountains. They occasionally saw Scarface and one day made contact with him. Scarface later married the young woman. On their travels back to his people, Scarface supposedly built the Medicine Wheel as their shelter. On the second day he built another tipi by the Big Horn river in the valley below. The tipi rings are believed to still exist.

It is also said that Red Plume, a great Crow Chief during the time of Lewis and Clark, found great spiritual medicine at the Medicine Wheel. The legend states that following four days without food of water, Red Plume was visited by little people who inhabited the passage to the wheel. They took him into the earth where they lived and told him that the red eagle feathers was his powerful medicine guide and protector. He was told to always wear the small feather from the back of the eagle above his tail feathers. Thus Red Plume received his name. Upon his deathbed, he told his people his spirit would be found at the wheel and that they might communicate with him there.