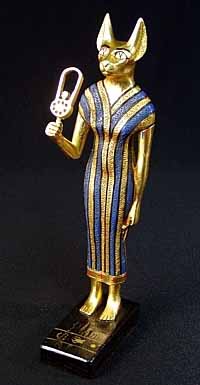 In Egyptian mythology, Bast (also spelled Ubasti, Baset, and later Bastet) is an ancient solar and war goddess, worshipped at least since the Second Dynasty. In the late dynasties, the priests of Amun began to call her Bastet, a repetitive and diminutive form after her role in the pantheon became diminished as Sekhmet, a similar lioness war deity, became more dominant in the unified culture of Lower and Upper Egypt. In the Middle Kingdom, the cat appeared as Bastet's sacred animal and after the New Kingdom she was depicted with a woman with a cat's head carrying a sacred rattle and a box or basket.

Bast or Bastet was the cat goddess and local deity of the town of Bubastis or Per-Bast in Egyptian, where her cult was centered. Bubastis was named after her. Originally she was viewed as the protector goddess of Lower Egypt, and consequently depicted as a fierce lioness. Indeed, her name means (female) devourer. As protector, she was seen as defender of the pharaoh, and consequently of the later chief male deity, Ra, who was a solar deity also, gaining her the titles Lady of Flame and Eye of Ra.

The goddess Bast was sometimes depicted holding a ceremonial sistrum in one hand and an aegis in the other - the aegis usually resembling a collar or gorget embellished with a lioness head.


History and Connection to Other Gods

Due to the threat to the food supply that could be caused by simple vermin such as mice and rats, and their ability to fight and kill snakes, especially cobras, cats in Egypt were revered highly, sometimes being given golden jewellery to wear and were allowed to eat from the same plates as their owners. Consequently, later as the main cat (rather than lioness) deity, Bastet was strongly revered as the patron of cats, and thus it was in the temple at Per-Bast that cats were buried and mummified.

When the owner died they would put the owner next to the mummified cat. More than 300,000 mummified cats were discovered when Bast's temple at Per-Bast was excavated. Herodotus writes that when a cat in the family dies, Egyptians shaved their eyebrows and took the body to Bubastis to be embalmed. 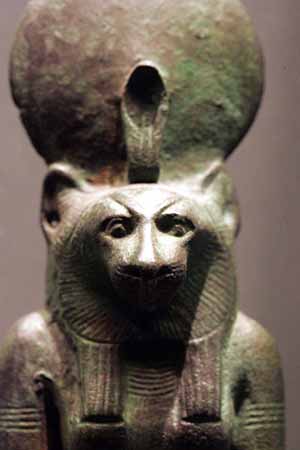 Wadjet-Bast, with a lioness head, the solar disk, and the cobra

As divine mother, and more especially as protector, for Lower Egypt, she became strongly associated with Wadjet, the patron goddess of Lower Egypt, eventually becoming Wadjet-Bast, paralleling the similar pair of patron (Nekhbet) and lioness protector (Sekhmet) for Upper Egypt. Bastet was the daughter of Amun Ra.

Later scribes sometimes renamed her Bastet, a variation on Bast consisting of an additional feminine suffix to the one already present, thought to have been added to emphasize pronunciation; but perhaps it is a diminutive name applied as she receded in the ascendancy of Sekhmet in the Egyptian pantheon. Since Bastet literally meant, (female) of the ointment jar, Bast gradually became regarded as the goddess of perfumes, earning the title perfumed protector. In connection with this, when Anubis became the god of embalming, Bast, as goddess of ointment, came to be regarded as his wife. The association of Bastet as mother of Anubis, was broken years later when Anubis became Nephthys' son.

Egypt's loss in the wars between Upper and Lower Egypt led to a decrease in her ferocity. Thus, by the Middle Kingdom she came to be regarded as a domestic cat rather than a lioness. Occasionally, however, she was depicted holding a lioness mask, hinting at potential ferocity. Because domestic cats tend to be tender and protective of their offspring, Bast was also regarded as a good mother, and she was sometimes depicted with numerous kittens. Consequently, a woman who wanted children sometimes wore an amulet showing the goddess with kittens, the number of which indicated her own desired number of children.

Eventually, her position as patron and protector of Lower Egypt led to her being identified with the more substantial goddess Mut, whose cult had risen to power with that of Amun, and eventually being syncretized with her as Mut-Wadjet-Bast. Shortly after, Mut also absorbed the identities of the Sekhmet-Nekhbet pairing as well.

This merging of identities of similar goddesses has led to considerable confusion, leading to some attributing to Bastet the title Mistress of the Sistrum (more properly belonging to Hathor, who had become thought of as an aspect of the later emerging Isis, as had Mut), and the Greek idea of her as a lunar goddess (more properly an attribute of Mut) rather than the solar deity she was. Indeed, much of this confusion occurred with subsequent generations; the identities slowly merged among the Greeks during their occupation of Egypt, who sometimes named her Ailuros (Greek for cat), thinking of Bastet as a version of Artemis, their own moon goddess.Thus, to fit their own cosmology, to the Greeks Bastet is thought of as the sister of Horus, whom they identified as Apollo (Artemis' brother), and consequently, the daughter of the later emerging deities, Isis and Ra.

The worship of the Goddess Bast continues today through Khemetic reconstructionalist religions, there are several 'Bast Cults' some of which may be found online and as such, technically, predates most Religions. In current day it is very common for Bast to be seen as a fertility goddess or even a goddess of lesbianism, despite the fact that research on her actual functions within the Egyptian pantheon is so very easy.