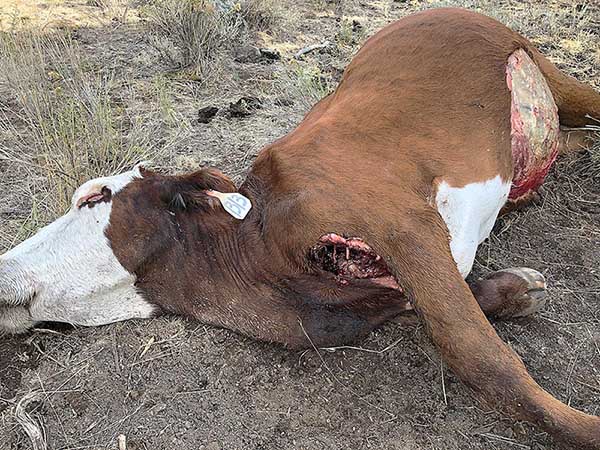 Since the first reports of animal mutilations, various explanations have been offered, ranging from natural decomposition and normal predation to cults and secretive governmental and military agencies, to a range of speculations, including cryptid predators (like the chupacabra) and extraterrestrials. Mutilations have been the subject of two independent federal investigations in the United States.

The animals are found dead - although the cause of death is undetermined - exsanguinated (all their blood has been removed). Precise "laser-precision" cuts are observed in the mutilated cattle. They have had certain organs surgically removed from their bodies. Often their reproductive and rectal organs have been removed.

Abnormally high radiation levels have been detected near the dead animals when they are found, and scavengers will not touch the carcass. There are no footprints leading to or from the cows. There is evidence (clamp marks on the animals' legs) that the cattle were taken from their habitats and mutilated elsewhere. Sightings of UFOs and strange, unmarked, black helicopters coincide with many cattle mutilation cases.

Animal mutilations date back for centuries, and remain an unexplained global phenomenon to this day. The number of animals said to be mutilated under unusual circumstances is unclear, but proponents argue it may be in the thousands. Ranchers are often said to be reluctant to come forward and report animals mutilated under odd circumstances, due to several factors: the associated ridicule, fear of reprisal, and the financial costs of securing necropsy for dead livestock.

All of this begs the questions ... Who is doing this and to what end? 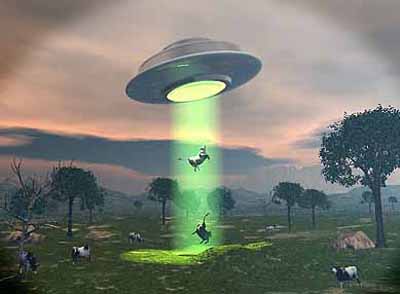 UFOs and strange black unmarked helicopters have been linked with these mutilations since they have been sighted at the same time in the same area where the mutilated bovines have been found. There have been reports about UFO's lifting the animal off the ground. No one seems to have a valid reason as to the link between the mutilations and ET's.

Proponents respond that many debunkers have little or no field experience with such mutilations, and further note that farmers and large-animal veterinarians have made distinctions between normal predation and cattle mutilations.

On December 4, 1973, law enforcement reported a wave of cattle mutilations in seven counties across Kansas and Nebraska. Sexual organs were reported having been removed. Weeks later, it was reported 38 mysterious cattle deaths has occurred across 11 counties. Multiple lab tests suggested many of the animals had died from "blackleg", a cattle disease.

By June 1974, mutilations were reported to have spread to Lancaster County, Nebraska. On August 20, 1974, the Lincoln Journal Star reported strange, unidentified helicopters shining spotlights into fields that would soon become mutilation sites. One investigator claimed helicopter sightings had become a nightly occurrence, with both the FAA and the National Guard reportedly being unaware of any helicopter activity. After ranchers began forming night vigils, the National Guard warned its helicopter pilots to fly at higher than normal altitude to avoid fire from "jittery farmers". State leaders called for an investigation. By October 1974, it was reported that UFO conspiracy theorists considered cattle mutilations might be related to UFOs

There have been reports that in some cases UFO's turned out to be helicopters. When cockpit lights came on, they revealed helicopter rotors above the craft. It is alleged that these events were done by humans arriving in helicopters which were disguised as flying saucers, as disinformation to distract US public attention from real secret aircraft development. There is a theory that the systematic removal of the same parts from all the attacked cattle, was a covert test for chemical or radioactive contamination. We may never know the truth about that, but as we have been shown over and over again, the government has been covering up information for decades.


The earliest known documented outbreak of unexplained livestock deaths occurred in early 1606 "...about the city of London and some of the shires adjoining. Whole slaughters of sheep have been made, in some places to number 100, in others less, where nothing is taken from the sheep but their tallow and some inward parts, the whole carcasses, and fleece remaining still behind. Of this sundry conjectures, but most agree that it tendeth towards some fireworks." The outbreak was noted in the official records of the Court of James I of England.

An account by Alexander Hamilton of Leroy, Kansas, supposedly occurred about April 19, 1897, and was published in the Yates Center Farmer's Advocate of April 23. Hamilton, his son, and a tenant witnessed an airship hovering over his cattle pen. Upon closer examination, the witnesses realized that a red "cable" from the airship had lassoed a heifer, but had also become entangled in the pen's fence.

After trying unsuccessfully to free the heifer, Hamilton cut loose a portion of the fence, then "stood in amazement to see the ship, cow and all rise slowly and sail off." (Jacobs, 15) Some have suggested this was the earliest report of cattle mutilation. This was part of a larger wave of so-called mystery airship sightings. (In 1982, however, UFO researcher Jerome Clark debunked this story, and confirmed via interviews and Hamilton's own affidavit that the story was a successful attempt to win a Liar's Club competition to create the most outlandish tall tale). Most of the allegedly unusual mutilations, however, date from the 1960s with cases continuing to the present.

The first widely-publicized case comes from near Alamosa, Colorado. On September 7, 1967 Agnes King and her son Harry noted that Snippy (The real name of the animal was Lady, but the media quickly adopted the name Snippy, which has stuck), a three-year-old horse had not returned to the ranch at the usual time for her water. This was unusual, given the heat and the arid conditions.

Harry found Snippy on September 9. Her head and neck had been skinned and defleshed, the bones were white and clean. To King, the cuts on Snippy seemed to have been very precise. There was no blood at the scene, according to Harry, and there was a strong medicinal odor in the air.

The next day, Harry and Agnes returned to the scene with Mr. and Mrs. Berle Lewis, who were Agnes' brother and sister-in-law. They found a lump of skin and horse flesh; when Mrs. Lewis touched it, the flesh oozed a greenish fluid which burned her hand. They also reported the discovery of fifteen tapering, circular exhaust marks punched into the ground over some 5000 square yards. (Saunders and Harkins, 156) The medicinal odor had weakened somewhat, but was still present.

Mrs. Lewis contacted the United States Forest Service, and Ranger Duane Martin was sent to investigate. Among other tasks, Martin checked the area with a civil defense Geiger counter. He reported finding a considerable increase in radioactivity about two city blocks from the body. (Saunders and Harkins, 157) Later, Martin would state, "The death of this saddle pony is one of the most mysterious sights I've ever witnessed ... I've seen stock killed by lightning, but it was never like this."

After trying to interest other authorities with little success, Mrs. Lewis turned to her professional connections: She wrote occasionally for the Pueblo Chieftain. Her account of Snippy's strange death was published in that newspaper, and was picked up by the Associated Press on October 5, 1967. Soon, much of the United States knew the tale of Snippy's death, and reports of UFO's were made from others in Colorado. That same day, an account by Superior Court Judge Charles E. Bennett of Denver, Colorado, saw publication. Bennett and his wife claimed to have witnessed three reddish-orange rings in the sky. They maintained a triangular formation, moved at a high speed, and made a humming sound.

The civilian UFO research group NICAP became involved in the case as well, and some people were speculating that UFOs were somehow involved with Snippy's death. Shortly thereafter, an anonymous Denver pathologist's account of his autopsy saw publication. Snippy's brain and abdominal organs were missing, he said, and there was no material in the spinal column. The pathologist insisted on anonymity, he said, due to fear of damaging his reputation with involvement in such a high-profile case.

The Condon Committee, then at the University of Colorado, sent its coordinator, Robert Low, to investigate. Low brought in Dr Robert O. Adams, head of Colorado State University's Veterinary and Biomedical Science School. Adams examined Snippy and the evidence. He concluded there were 'No unearthly causes, at least not to my mind.' (Saunders and Harkins, 164) Adams noted a severe infection in Snippy's hindquarters, and speculated that someone had come across the dying horse and slit its throat in order to end its misery. Then, Adams said, scavengers had inflicted the rest of the damage to the horse.

To some, this settled the question, but Mrs. Lewis argued that Adams' conclusions were flawed in not accounting for the lack of blood at the scene and the medicinal odor. Low reported that he'd located the anonymous pathologist; Low said that the man was widely misquoted and was furthermore not a pathologist. The man's opinions of Snippy's death generally matched Adams', said Low. Jerome Clark later identifies the anonymous man as hematologist John H. Altshuler.


Detectives perplexed by mysterious Oregon cattle mutilations   Oregonian Live - April 23, 2021
Mutilated cattle have been reported in the American West since at least the 1960s. The udders appeared to have been removed with precision - straight, even cuts, as if made by a sharp object. The reproductive systems had been cut out cleanly as well, and without disturbing other organs. There was no indication of predator activity and perhaps strangest of all, scavenging animals appeared to have hardly touched these six cow carcasses found in a seven-day span this year on ranch land in rural Crook County. There were no tracks, and no blood surrounding it. The cow's left cheek, tongue and three of its teats had been cut away cleanly. But the eyes, usually the first body part to be scavenged after death, were untouched. There were no bullet holes and a scan of the cow by a metal detector turned up none. The cow was about 200 yards from the road, near the edge of a field and some juniper trees. There were no vehicle tracks near the dead animal, no footprints of any kind.


Something is mutilating cattle in Oregon, and yes, aliens are suspected   BGR - October 17, 2019
Something very strange is happening on the massive Silvies Valley Ranch in eastern Oregon. The ranch, which covers 140,000 acres and includes a golf course, cabin rentals, and a restaurant, recently lost five bulls under eerie circumstances, and ranch staff have absolutely no idea what is going on. The bulls began dying earlier this summer, with ranch hands finding their lifeless bodies on the range, mutilated and drained of blood. Whatever is killing the cattle is capable of dispatching an animal that can weigh upwards of 2,000 pounds, then spending a considerable amount of time at the dead body before disappearing without a trace.

Charles Fort collected many accounts of cattle mutilations that occurred in England in the late 19th and early 20th centuries.


In his book The Mothman Prophecies, John Keel claims to have examined a number of slain dogs, cows and horses in the Point Pleasant, West Virginia area in 1966 and 1967. These animals, Keel writes, bore surgical-like incisions in their throats - often the carcasses seemed drained of blood. 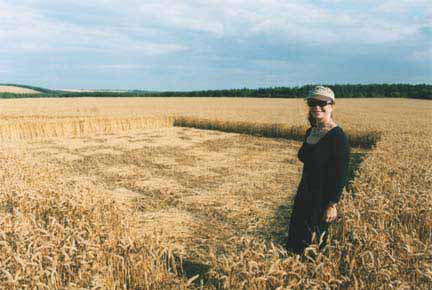 The foremost authority of animal mutilations is Linda Moulton Howe. Linda was a guest on my talk show "The Metaphysical Experience" in the 1990's where we discussed this world wide phenomenon, leading me to believe that something paranormal has occurred. To date no one has video footage of an animal being carried away by an alien space craft - but there are dozens of witnesses who report witnessing this phenomenon.