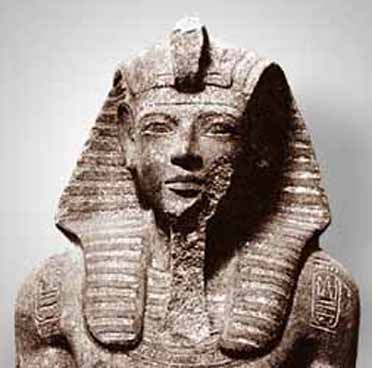 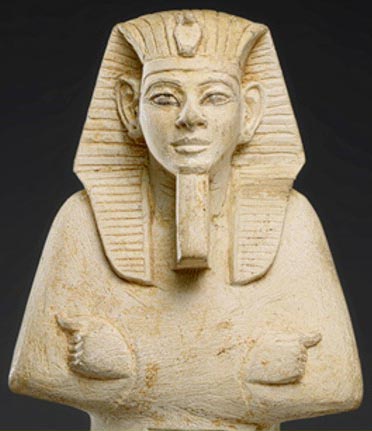 Merneptah (or Merenptah) was the fourth ruler of the Nineteenth Dynasty of Ancient Egypt. He ruled Egypt for almost ten years between late July or early August 1213 and May 2, 1203 BC, according to contemporary historical records.

He was the thirteenth son of Ramesses II and only came to power because all his older brothers, including his full brother Khaemwaset or Khaemwase, had predeceased him, by which time he was almost sixty years old. His throne name was Ba-en-re Mery-netjeru, which means "The Soul of Ra, Beloved of the Gods".

Merneptah probably was the fourth child of Isetnofret, the second wife of Ramesses II, and he was married to Queen Isetnofret, his royal wife, who was likely his full sister bearing the name of their mother. It is presumed that Merneptah also was married to Queen Takhat and one of their sons would become the later nineteenth dynasty pharaoh, Seti II. They also were the parents of prince Merenptah and possibly the usurper, Amenmesse, and Queen Twosret, wife of Seti II and later pharaoh in her own right.

Merneptah had to carry out several military campaigns during his reign, in year 5 he fought against the Libyans, who - with the assistance of the Sea Peoples - were threatening Egypt from the West.

The major event of the reign of the Pharaoh Merneptah (1213 BC-1203 BC), 4th king of the 19th Dynasty, was his battle against a confederacy termed "the Nine Bows" at Perire in the western delta in the 5th and 6th years of his reign. Depredations of this confederacy had been so severe that the region was "forsaken as pasturage for cattle, it was left waste from the time of the ancestors." 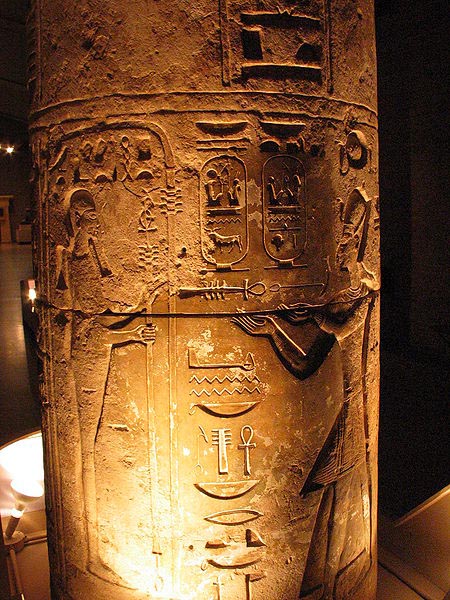 The pharaoh's action against them is attested in four inscriptions: the Great Karnak Inscription, describing the battle, the Cairo Column, the Athribis Stele (the last two of which are shorter versions of the Great Karnak), and a stele found at Thebes, called variously the Hymn of Victory, the Merneptah Stele or the Israel Stele. It describes the reign of peace resulting from the victory.

The Nine Bows were acting under the leadership of the king of Libya and an associated near-concurrent revolt in Canaan involving Gaza, Ashkelon, Yenoam and Israel. Exactly which peoples were consistently in the Nine Bows is not clear, but present at the battle were the Libyans, some neighboring Meshwesh, and possibly a separate revolt in the following year involving peoples from the eastern Mediterranean, including the Kheta (or Hittites), or Syrians, and (in the Israel Stele) for the first time in history, the Israelites. In addition to them, the first lines of the Karnak inscription include some sea peoples,[24] which must have arrived in the Western Delta or from Cyrene by ship

The Sea Peoples were a confederacy of seafaring raiders of the second millennium BC who sailed into the eastern Mediterranean, caused political unrest, and attempted to enter or control Egyptian territory during the late 19th dynasty and especially during year 8 of Ramesses III of the 20th Dynasty. The Egyptian Pharaoh Merneptah explicitly refers to them by the term "the foreign-countries (or 'peoples') of the sea" in his Great Karnak Inscription. Although some scholars believe that they invaded Cyprus, Hatti and the Levant, this hypothesis is disputed.

Merneptah led a victorious six-hour battle against a combined Libyan and Sea People force at the city of Perire, probably located on the western edge of the Delta. His account of this campaign against the Sea Peoples and Libu is described in prose on a wall beside the sixth pylon at Karnak.

In the Athribis Stele, in the garden of Cairo Museum, it states "His majesty was enraged at their report, like a lion", assembled his court and gave a rousing speech. Later he dreamed he saw Ptah handing him a sword and saying "Take thou (it) and banish thou the fearful heart from thee." When the bowmen went forth, says the inscription, "Amun was with them as a shield."

After six hours the surviving Nine Bows threw down their weapons, abandoned their baggage and dependents, and ran for their lives. Merneptah states that he defeated the invasion, killing 6,000 soldiers and taking 9,000 prisoners. To be sure of the numbers, among other things, he took the penises of all uncircumcised enemy dead and the hands of all the circumcised, from which history learns that the Ekwesh were circumcised, a fact causing some to doubt they were Greek. 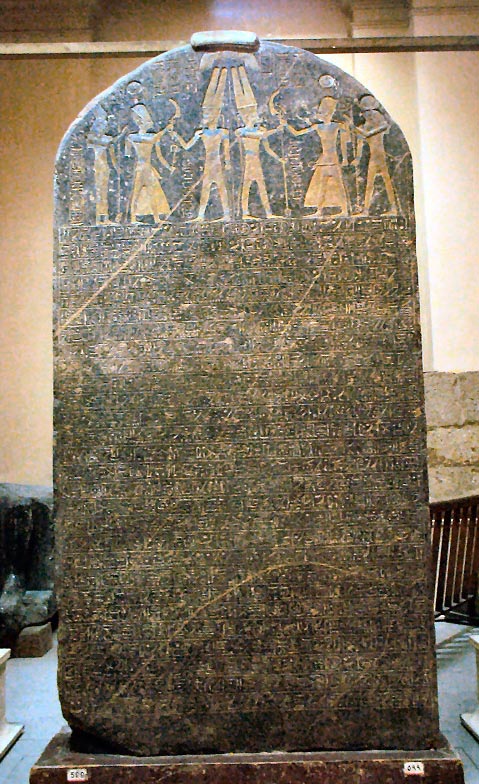 There is also an account of the same events in the form of a poem from the Merneptah Stele, widely known as the Israel Stele, which makes reference to the supposed utter destruction of Israel in a campaign prior to his 5th year in Canaan: "Israel has been wiped out...its seed is no more." This is the first recognized ancient Egyptian record of the existence of Israel--"not as a country or city, but as a tribe" or people.

Merneptah was already an elderly man in his late 60s if not early 70s when he assumed the throne. Merneptah moved the administrative center of Egypt from Piramesse (Pi-Ramesses), his father's capital, back to Memphis, where he constructed a royal palace next to the temple of Ptah. This palace was excavated in 1915 by the University of Pennsylvania Museum led by Clarence Fischer.

Naneferkaptah was the royal heir, being the son of Merneptah's royal wife, Queen Isetnofret (Isisnofret), but he, his wife, and their heir died before the death of Merneptah, and their story survives in text. Merneptah's successor, Seti II, was another son of Queen Isisnofret. However, Seti II's accession to the throne was not unchallenged: a rival king named Amenmesse, who was either another son of Merneptah by Takhat or, much less likely, of Ramesses II, seized control over Upper Egypt and Kush during the middle of Seti II's reign. Seti was able to reassert his authority over Thebes in his fifth year, only after he overcame Amenmesse. It is possible that before seizing Upper Egypt Amenmesse had been known as Messui and had been viceroy of Kush. 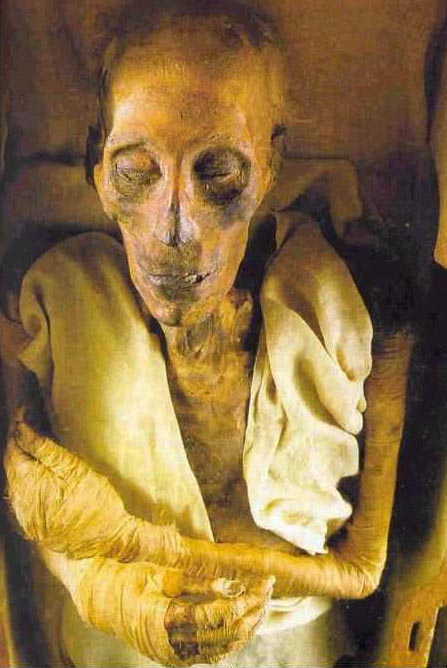 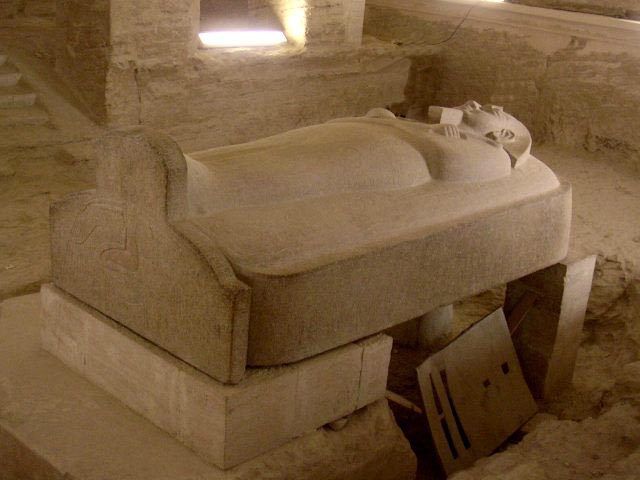 Merneptah suffered from arthritis and arteriosclerosis in old age and died after a reign which lasted for nearly a decade. Merneptah was originally buried within tomb KV8 in the Valley of the Kings, but his mummy was not found there. In 1898 it was located along with eighteen other mummies in the mummy cache found in the tomb of Amenhotep II (KV35) by Victor Loret. Merneptah's mummy was taken to Cairo and eventually unwrapped by Dr. G. Elliott Smith on July 8, 1907.


Stela of Amenophis III, raised by Merneptah - bearing the earliest mention of Israel 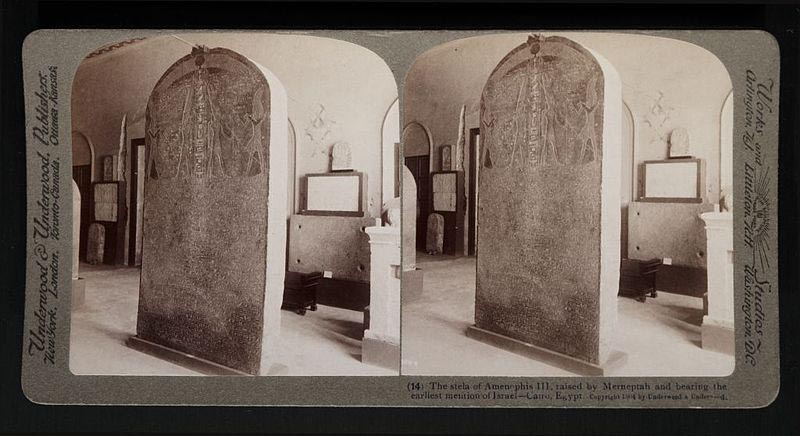