Oaxaca was the heartland of an ancient Mesoamerican state that flourished between 400 BC and 600 AD. Its heart was the hilltop city of Monte Alban, part or all of which was possibly called the Hill of One Jaguar. Indeed, this fierce animal mirrored the aggressiveless of this state, and it is in this warlike context that many of the earliest "Zapotec" writing was found.

Notice how I quoted Zapotec. Many argue that since there is no archaeological evidence of major folk migration between the late Pre-Classic and Spanish Conquest (except for the Mixtecs, but their movement was recorded) in the Valley of Oaxaca, we can safely assume that the people living in Monte Alban were the ancestors of the modern Zapotecs, and so we can call their language and writing system Zapotec. However, still we can never be fully sure if the people who wrote the inscriptions down did in fact spoke an ancestral form of the Zapotec language. We call them Zapotec merely out of convenience.

Anyhow, like the early stages of Maya decipherment, the calendrical part of this ancient system has been the most understood part. However, this system, at least in its earlier stages, also had a much more textual content than the later Mixtec or Aztec systems.

It is not known if Zapotec writing is fully logophonetic, or restricted logographic with rebus spelling, and opinions are divided. Researcher thinks Zapotec is logophonetic (albeit minimally) based on the criteria that it has 80 to 90 non-calendrical signs, in that there are logograms to represent morphemes, and "syllabograms" to represent (usually) consonant-vowel syllables.

Futhermore, Martha Macri suggested that "the arrangement of signs and the abstract form of many of them suggest the script is analogous to the logographic/syllabic Epi-Olmec and Maya scripts." (from World's Writing Systems) On the other hand, Alfonso Caso thought that most of the Zapotec signs (like the later Mixtec) are logograms (represent morphemes), and to spell out a sequence of sounds, they use logograms, not for their meaning, but for their approximate sound. A good and common example in English is to use B4 to represent before. Maybe the system started as logophonetic and gradually became more iconic as time goes by.

The Zapotec system has great antiquity, whose first example is a stone slab dating from around 500 BC at the site of San Jose Mogote, the largest settlement before the construction of Monte Alban around the time of this stone slab.

Together with slightly later example from Monte Alban, the danzantes slabs are depictions of slain and mutilated captives along with their names or the dates of the event inscribed right next to them (in Ancient Oaxaca given names are based on the person's birthday, so it becomes impossible to tell a name from a date). So, from these danzantes, it would seem that writing is just being used for name-tagging. However, Stelae 12 and 13, which are very likely contemporary with the danzantes show that the system is already textual because there's no depiction of whatever event it is recording. 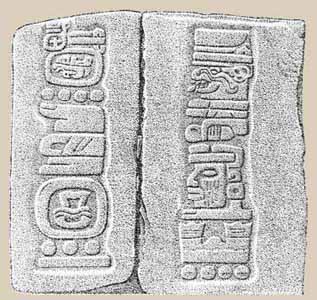 Later in period of Monte Alban II (200 BC - 250 AD), the same conquest symbolism manifests in the so-called "Conquest Slabs" 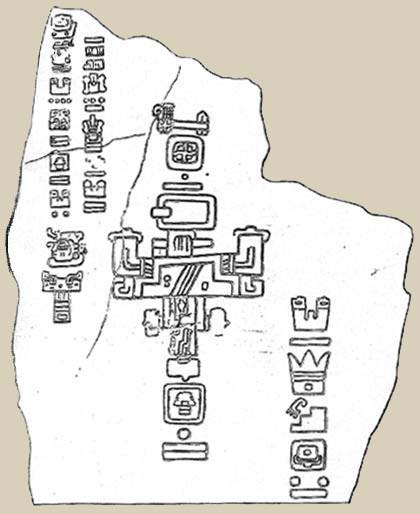 Year, "6 Turquoise" in this case.
Place name.
Mountain/Place sign.
Inverted sign, usually a head, but this time an inverted glyph that might represent a god of the conquered town (according to Alfonso Caso). Inverted motifs in Mesoamerica traditionally mean "defeat", "ruin", etc.
Date, possibly a month, read as 11 Arrow (flecha).

By comparing the name of towns on these conquest slabs with names of towns on 15-th century Aztec manuscripts of tributes from Oaxaca, scholars have determined the size of the Monte Alban state when the slabs were made. It extended well outside the Valley of Oaxaca.

Not all texts in Monte Alban are war-related. The Lapida de Bazan is thought to represent some form of diplomatic relationship between Monte Alban and Teotihuacan. The evidence is the figure on the left appears to wearing Teotihuacan-style clothing, and every well might have been a visitor from that great city in Central Mexico. The person on the right probably was a local ruler, dressed in local jaguar-style clothing. Due to lack of calendrical signs, the accompanying text might have recorded what the depicted event was. 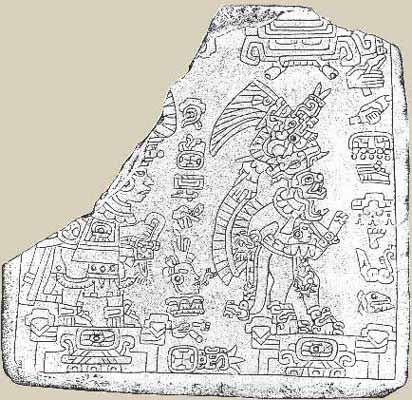 In addition to the Lapida de Bazan, there are many other clues about the relationship between the two metropolises in the early Classic. Other carvings in Monte Alban represented travelers in Teotihuacan garments traveling to Monte Alban (which was called the Hill of 1 Jaguar in the monuments). In Teotihuacan itself, there was a Zapotec barrio where a permanent Zapotec colony was established and flourished.

At its peak between 100 and 600 CE, Monte Alban had as many as 30,000 inhabitants. However, after 700 CE, the population rapidly declined, and it probably ceased to be the capital of the Zapotec state. Regional states appeared, and the Monte Alban hegemony was at its end.

The focus of writing in these new regional states shifted from warfare and diplomacy to royal lineage. Not surprisingly these new kind of monuments are called "Genealogical Registers" by archaeologists. 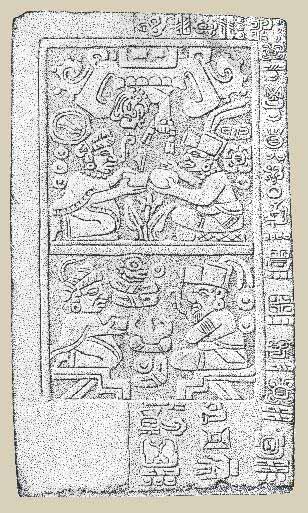 These geneological registers depict births, marriages, and deaths in the cities' royalties. In this particular register from Zaachila, the top level depicts a wedding. The lower level probably represents a pair of ancestor. And the column of glyphs on the right side of the register is a list of dates. These dates don't seem to have any particular religious or historic purposes. Among both the Zapotecs and Mixtecs, birthdays are often given as names, so the column on the right probably is a list of ancestors.

The Zapotec system very likely was the source of the Mixtec system, which is characterized by a highly pictorial and minimal set of logograms, and by the use of the rebus principle for rough phonetic spelling of names. Zapotec