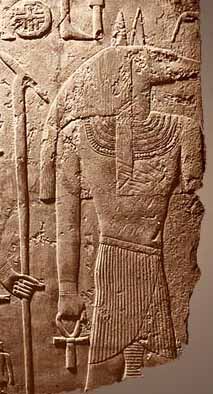 In late Egyptian mythology, Wepwawet (also rendered Upuaut, Wep-wawet, Wepawet, and Ophois) was originally a war deity, whose cult centre was Asyut in Upper Egypt (Lycopolis in the Greco-Roman period). His name means, Opener of the Ways. Some interpret that Wepwawet was seen as a scout, going out to clear routes for the army to proceed forward. One inscription from the Sinai states that Wepwawet "opens the way" to king Sekhemkhet's victory.

It was not unusual in ancient Egypt for more then one god to take the same form, with similar functions as another god. Wepwawet (Ophios, Upuaut), called the son of Isis, was one of several Egyptian deities to take the form of a canine, today often incorrectly identified as a wolf. Egyptologists now believe that he was more likely associated with the jackal, though he is often depicted with a gray or white head.

Wepwawet originally was seen as a wolf deity, thus the Greek name of Lycopolis, meaning city of wolves, and it is likely the case that Wepwawet was originally just a symbol of the pharaoh, seeking to associate with wolf-like attributes, that later became deified as a mascot to accompany the pharaoh. Likewise, Wepwawet was said to accompany the pharaoh on hunts, in which capacity he was titled (one with) sharp arrow more powerful than the gods.

Over time, the connection to war, and thus to death, led to Wepwawet also being seen as one who opened the ways to, and through, duat, for the spirits of the dead. Through this, and the similarity of the jackal to the wolf, Wepwawet became associated with Anubis, a deity that was worshiped in Asyut, eventually being considered his son. Seen as a jackal, he also was said to be Set's son. Consequently, Wepwawet often is confused with Anubis. This deity appears in the Temple of Seti I at Abydos.

In later Egyptian art, Wepwawet was depicted as a wolf or a jackal, or as a man with the head of a wolf or a jackal. Even when considered a jackal, Wepwawet usually was shown with grey, or white fur, reflecting his lupine origins. He was depicted dressed as a soldier, as well as carrying other military equipment - a mace and a bow. For what generally is considered to be lauding purposes of the pharaohs, a later mythos briefly was circulated claiming that Wepwawet was born at the sanctuary of Wadjet, the sacred site for the oldest goddess of Lower Egypt that is located in the heart of Lower Egypt. Consequently, Wepwawet, who had hitherto been the standard of Upper Egypt alone, formed an integral part of royal rituals, symbolizing the unification of Egypt.

In the late pyramid texts, Wepwawet is called "Re who has gone up from the horizon," perhaps as the "opener" of the sky.

In the later Egyptian funerary context, Wepwawet assists at the Opening of the mouth ceremony and guides the deceased into the netherworld.

Like Anubis, Wepwawet was also a funerary deity, and was one of the earliest of the gods worshipped at Abydos.Ę Early on, Wepwawet's worship paralleled that of Khentyamentiu, but when Osiris absorbed that god's attributes, Anubis filled his funerary role. However, with the rise of the solar cult, particularly during the 12th Dynasty, Osiris was limited to the underworld and the local god and lord of the cemetery at Abydos was filled by Wepwawet, who gained the titles, "Lord of Abydos" and Lord of the Necropolis".Ę

Other cult centers for Wepwawet included Quban, el-Hargarsa, Memphis, Sais and particularly the thirteenth ancient nome of Upper Egypt. This is the location of modern Asyut, which the Greeks called Lycopolis. This may be the origin of the misinterpretation of Wepwawet as a wolf, for Lycopolis can be interpreted as the "Town of the Wolf".Ę

Wepwawet's name means "the opener of the ways (or Roads)". We believe this refers to his role in leading the deceased through the underworld as a protector. This attribute of the god is well established in New Kingdom funerary texts such as the Book of Going Forth by Day Book of the Dead, and the Book of That Which Is in the Underworld (Amduat). Wepwawet was also thought of as the messenger and champion of royalty. Like Shu, he was also referred to as the "one who has separated the sky from the earth.Ę

Wepwawet's image is generally portrayed with a uraeus and a hieroglyph that has been described as representing the king's placenta, surmounting a standard known as a shedshed. The famous mace of Narmer shows such a standard in use as early as the First Dynasty. It is possible, given this context, that early on Wepwawet was a warlike deity and that in war, he also "opened the way" for the Egyptian army.

Wepwawet's standard was carried preceding the king from the palace or temple during processions, and during the New Kingdom, Wepwawet's standard even preceded that of Osiris. In fact, Wepwawet's standard symbolized Upper Egypt in royal processions, while Lower Egypt's counterpart was the Apis bull of Memphis. However, one inscription provides that he was born in the sanctuary of the goddess Wadjet at Buto in the Nile Delta, though this was most likely politically inspired, considering that all evidence points to his Upper Egyptian origins.Ę

- Gods of the Egyptians, The (Studies in Egyptian Mythology) Budge, E. A. Wallis 1969