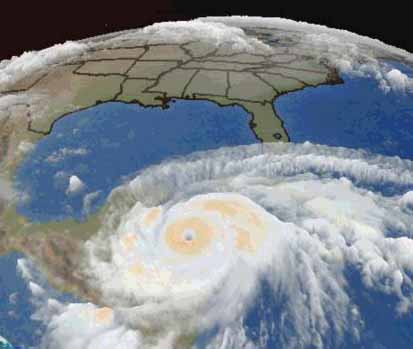 Weather is an all-encompassing term used to describe all of the many and varied phenomena that can occur in the atmosphere of a planet. The term is normally taken to mean the activity of these phenomena over short periods of time, usually no more than a few days in length. Average atmospheric conditions over significantly longer periods are known as climate. Usage of the two terms often overlaps and the concepts are obviously very closely related.

Weather phenomena result from temperature differences around the globe, which arise mainly because areas closer to the tropics, around the equator, receive more energy from the Sun than more northern and southern regions, nearer to the Earth's poles.

A secondary cause of temperature differences on the Earth is that different surface areas (such as ocean waters, forested lands, and ice sheets) have differing reflectivity (albedo), and therefore absorb and radiate different amounts of the solar energy they receive.

Surface temperature differences cause vertical wind currents. A hot surface heats the air above it, and the air expands and rises, lowering the air pressure and drawing colder air into its place. Rising and expanding air gives up its heat and so cools, which causes it to shrink and sink, increasing air pressure and displacing the air already below it.

Horizontal wind currents are formed at the boundaries between differentially heated areas and can be intensified by the presence of sloped surfaces. The simple systems thus formed can then display emergent behaviour to produce more complex systems and thus all other weather phenomena. A large scale example of this process can be seen in the Hadley cell and other forms of atmospheric circulation. A smaller scale example would be coastal breezes.

The Coriolis effect is important in causing large scale rotations known as Cyclones.The fundamental causes of weather are thus surface temperature, and to a lesser extent, elevation.Because the Earth's axis is tilted (not perpendicular to its orbital plane), sunlight is incident at different angles at different times of the year.

In June the Northern Hemisphere is tilted towards the sun, so at any given Northern Hemisphere latitude sunlight falls more directly on that spot than in December. This effect causes seasons. Any precession in a planet's orbit will affect the amount of energy received at a particular spot throughout the year and may influence long-term weather patterns.

On Earth, regularly occurring weather phenomena include such things as wind, cloud, rain, snow, fog and dust storms. Less common events include natural disasters such as tornadoes, hurricanes and ice storms. Almost all recognized weather phenomena on Earth occur in the troposphere (the lower part of the atmosphere). Weather does occur in the stratosphere and does affect weather lower down in the troposphere, but the exact mechanisms are poorly understood. The Earth's atmosphere is one large chaotic system so small changes to one part can have large effects elsewhere. This makes it very difficult to accurately predict short term weather changes more than a few days in advance, though weather forecasters are continually working to extend this limit through the science of the study of weather, Meteorology.

Chaos theory explains that there are an infinite number of variables which affect the weather. The slightest variation in the motion of any molecule in the air influences the atmospheric situation. The slightest difference could affect the troposphere sufficiently to lead to utterly different conditions. Thus it will never be possible to forecast perfectly.

Along with plate tectonics and ocean circulation, weather is one of the fundamental processes that have shaped the Earth since its creation and will continue to do so as long as it exists. The process of weathering breaks down rocks and soils into smaller fragments and then into their constituent substances. These are then free to take part in chemical reactions that can affect the surface further (e.g. acid rain) or are reformed into other rocks and soils. Weather also plays a major, if indirect, role in erosion of the surface, moving surface constituents around.

Weather has played a large, and sometimes direct, part in human history. Aside from climatic changes that have caused the gradual drift of populations (for example the desertification of the Middle East, and Ice ages in Northern Europe), extreme weather events have caused smaller scale population movements and intruded directly on the course of human history.

One such event that is celebrated is the saving of Japan from invasion by the Mongol fleet of Kublai Khan by the Kamikaze winds in 1281.

The Little Ice Age of the 14th to 18th centuries had wide ranging effects in the northern hemisphere, including decimating the fledgling Viking colonies of Greenland, catalysing the formation of leagues among the Native American groups in North America, and forcing the change of patterns of agriculture across Europe to accommodate the shortened growing season. A series of great storms throughout the 13th century caused the powerful English Cinque Ports to be silted up and hence lose their influence.

More recently, Hurricane Katrina forced the temporary abandonment of the entire city of New Orleans in 2005.

Because of the large effect that weather has on day-to-day life and due to the impossibility of any type of forecasting before the advent of modern technology, a large body of folklore aimed at trying to explain the weather has grown up, some of which is fairly accurate, most less so.

A well known example is the Groundhog Day celebrated near the end of winter in parts of the United States.

The effect of seasons on the life of primitive peoples also caused them to observe and celebrate certain events during the calendar, some of which, in adulterated form, are still observed today.

Christmas, for example, is the Yule of the pagans, celebrated around the winter solstice, the shortest day of the year (in the Northern Hemisphere, the summer solstice in the Southern Hemisphere).

It is the goal of some scientists to control the weather. Experiments have been carried out for many years, but the results are usually ambiguous. On a grander scale, science fiction authors have long posited the idea of terraforming other planets in order to make them habitable by human beings. While this may be possible in the distant future, this is far beyond current technology.

Weather phenomena and systems on other planets are thought to be similar to those on Earth, but often occur on a much bigger scale or involve different substances to those familiar to Earth dwellers. The Cassini-Huygens mission to Titan, for example, discovered clouds formed from methane or ethane which deposit rain composed of liquid methane and other organic compounds.

Extra-terrestrial weather systems can be extremely stable; one of the most famous landmarks in the solar system, Jupiter's Great Red Spot is an anticyclonic storm known to have existed for at least 300 years. On other gas giants, the lack of a surface allows the wind to reach enormous speeds: gusts of up to 400 metres per second (900 mph) have been measured on the planet Neptune.

This has created a puzzle for planetary scientists: The weather is created by the differential action of the Sun's energy on different places and the amount of energy received by Neptune is very, very small, relative to the Earth, yet the strength and magnitude of weather phenomena on Neptune is far, far greater than on Earth. This mystery is still to be solved.

Earth's weather appears to behave based on about a half-dozen latitudinal weather zones. Jupiter's banded appearance shows over a dozen such zones, while Venus appears to have no zones at all. Studying how the weather works on other planets has been seen as helpful in understanding how it works on Earth.

Weather is not limited to just planetary bodies, however. A star's corona is constantly being lost to space, creating what is essentially a very thin atmosphere throughout the solar system, known as the solar wind.

Inconsistencies in this wind and larger events on the surface of the star, such as Coronal Mass Ejections, form a system that has features analogous to conventional weather systems (i.e. pressure and wind), and though not true weather, is generally known as space weather.

The activity of this system can affect planetary atmospheres and occasionally surfaces. The interaction of the solar wind with the terrestrial atmosphere can produce spectacular aurorae, but can play havoc with electrically sensitive systems such as electricity grids and radio signals.