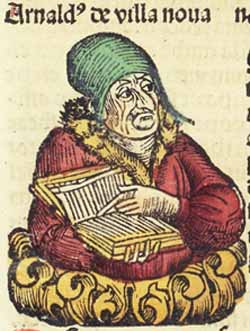 Arnaldus de Villa Nova (also called Arnaldus de Villanueva, Arnaldus Villanovanus, Arnaud de Ville-Neuve or Arnau de Vilanova, c. 1235-1311) was an alchemist, pharmacist, astrologer and physician. As with other alchemists of his time most of the details of his life are obscure.

He was born in Valencia, and appears to have been of Catalan origin, and to have studied chemistry, medicine, physics, and also Arabic philosophy. After having lived at the court of Aragon and taught many years in Montpellier School of Medicine, he went to Paris, where he gained a considerable reputation; but he incurred the enmity of the ecclesiastics and was forced to flee, finally finding an asylum in Sicily. About 1313 he was summoned to Avignon by Pope Clement V, who was ill, but he died on the voyage off the coast of Genoa.

He is credited with translating a number of medical texts from Arabic, including works by Ibn Sina (Avicenna), Qusta ibn Luqa (Costa ben Luca), and Galen. Many alchemical writings, including Thesaurus Thesaurorum or Rosarius Philosophorum, Novum Lumen, and Flos Florum, are also ascribed to him, but they are of very doubtful authenticity. Collected editions of them were published at Lyon in 1504 and 1532 (with a biography by Symphorianus Campegius), at Basel in 1585, at Frankfurt in 1603, and at Lyon in 1686. He is also the reputed author of various medical works, including Breviarium Practicae. Among his achievements was the discovery of carbon monoxide and pure alcohol.

At Barcelona he had John Casamila as teacher, thought highly of Galen, and among the Arabs cared only for Rhazes. He taught medicine, botany, and alchemy at Barcelona, Montpellier, and Paris. His life was a wandering one; besides the cities just mentioned, he lived for considerable periods of time at Lyons, Avignon, Rome, Florence, Bologna, Naples, and Palermo.

He was considered superior to all other physicians and alchemists, so that he was frequently summoned by popes and princes. Thus he was at times at the papal Court during the reigns of Innocent V, Boniface VIII, Benedict XI, and Clement V. He was also the personal physician of Pedro III and James II of Aragon, Robert of Naples, and Frederick II of Sicily.

He was repeatedly obliged to go from place to place because the Inquisition in Spain and Paris sentenced him to banishment on account of his fantastic writing, which were at times heretical. Owing to the large number of writings still extant bearing his name, some evidently spurious, others doubtful, it is not easy to judge Villanovanus.

His reputation in alchemy was excelled only by that of Raymond Lully, who was regarded as his pupil. Modern criticism has assigned to an earlier age many chemical discoveries that were formerly ascribed to Villanovanus, as acids, alcohol, distillation etc. Yet a number of his works were very important in placing medicine and pharmacology on a scientific basis; besides an independent judgment they show ripe experience and great humanity.

Although a layman he wrote much on theology. His alchemistic and astrological bent led him into erroneous opinions regarding the Church, the Mass, Antichrist, the end of the world, and the person of Christ. The first complete edition of his works was issued at Lyons in 1504, reissued at the same place in 1520 and 1532 (folio). The most complete edition is that of Taurellus (Basle, 1585), with a biography of Arnaldus. For the individual works see, in particular, Haser, op. cit. in bibliography below. Several of them were repeatedly reprinted before 1500.

He died while on his way to visit the sick pontiff, Clement V.